Writing an interesting book is eXtraOrdinary 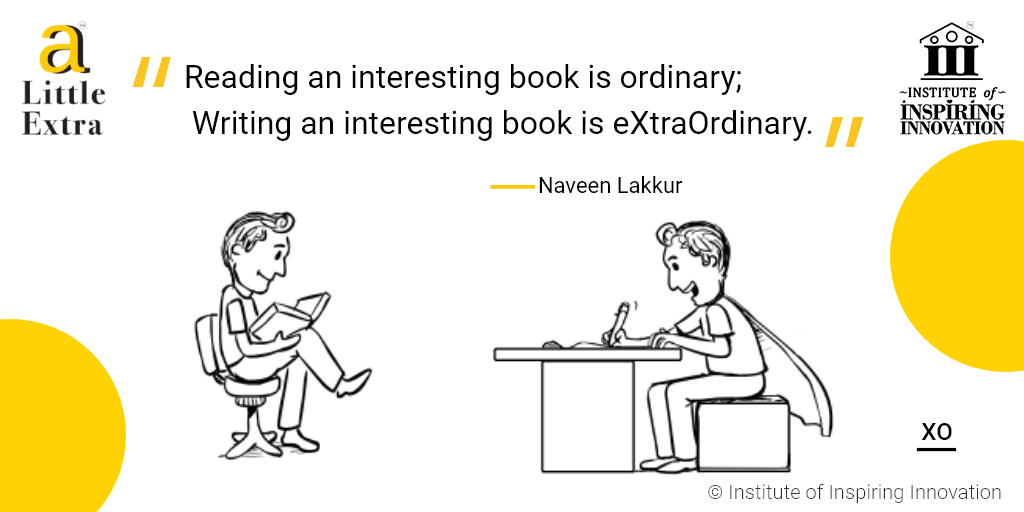 Story 1 – Serial Entrepreneur/Writer Who Set a Bar for Readers

Silicon Valley-based serial entrepreneur, author, and speaker Rajesh Setty started reading books when he was five. He read Kannada books like Chandamama, Bombemane, Balamitra, and Putani. His interest turned to fascination due to the fantastic stories he read. After some time, reading became his obsession. He had to get his hands on Kannada periodicals like Prajamatha, Sudha, and other books before his brother did.

A few years later, he started reading the ‘Famous Five’ and ‘Secret Seven’ series of novels. By the time he was nine, he had read more than 100 books and graduated to Earl Stanley Gardner’s Perry Mason courtroom dramas. He would even skip meals to finish reading books. Such was his interest. The local library would lend only two books at a time. He would read the books walking home, many times turning around to borrow two more, only to finish them up before he reached home.

Good grades kept his parents happy and gave him a free hand at home to creative pursuits. He tried his hand in journalism breaking news to the public in a Kannada evening daily. Meanwhile, he managed to publish ‘Agent Avinash,’ a spy thriller, and ‘Bandalikegalu’ (parasites), his collection of poems. His early success came because he found mentors.

He finished engineering and earned many friends that he collaborates with today. His first attempt at starting a venture after engineering failed. After two years as a consultant with a financial software company, he joined the next company where the opportunity to head a division as a General Manager came. He presented a two-year plan after reading about the business of computing, technology management, and business process reengineering. He got support from the CEO to innovate and take risks.

Then came the opportunity to move to Silicon Valley. He joined a company as a programmer, but he took up a documentation project that no one wanted, giving him the learning about CRM implementation. He made a big impression on his client, H.P. allowing him to lead and manage projects. He then tried starting up several times, but all of them reached the ‘startup graveyard.’

Along with four others, he started Certified Talent to provide companies with ‘certified talent.’ However, due to circumstances, they pivoted to providing Open Source solutions, renaming the company as CIGNEX. Soon, he started writing a blog on his website as a support to write his first non-fiction book, ‘Beyond Code,’ and has been publishing his wisdom on napkinsights.

After his first entrepreneurial success, he went on to establish and get involved in many startups, namely, Jifflenow, icharts, Compassites, THINKaha, Wittyparrot, MentorCloud, and Audvisor. The result of all this is that Rajesh acquired a lot of experience in building startups that he has published in The Dirty Dozen, Upbeat, and several interesting books in collaboration with Chaitra Vedulapalli, Marshall Goldsmith, Barbara Safani, Tanmay Vora, and others.
The latest book in Rajesh Setty’s portfolio is Six Foot World that he wrote as a guide for businesses impacted due to the COVID-19 pandemic to reinvent themselves. We hope that he writes many more interesting books.