Wishing for possibilities from life is eXtraOrdinary 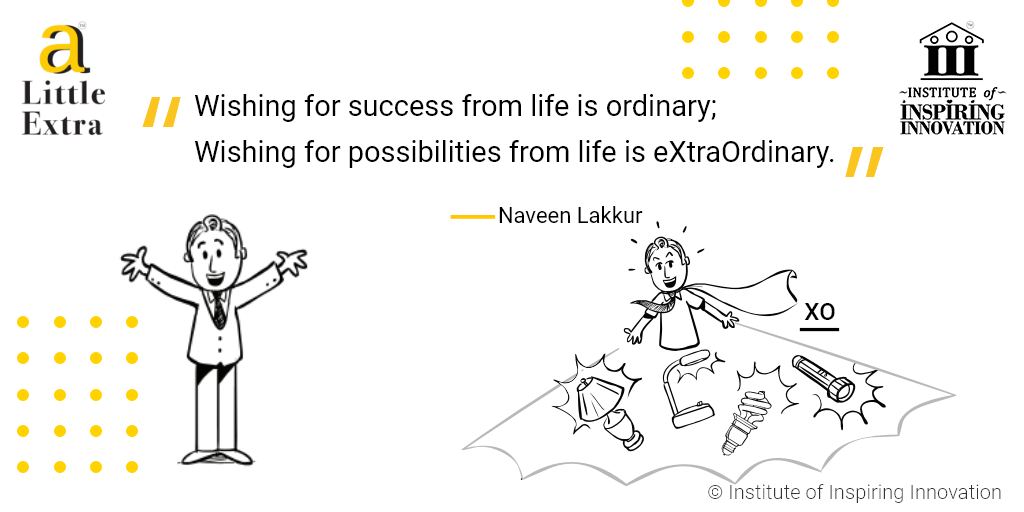 All of us wish for success in life. Even though we know that failure is the stepping-stone to success, we want to be successful and never want failure in life at the back of the mind. It is the primary human character. Some people go a Little Extra and look for possibilities that could make them and others around them successful, helping them glide away from failure towards success. Let us read about some people who created possibilities.

Sunil Mittal went into making cycle parts in 1976 by borrowing ₹20,000 from his father in Ludhiana. Within three years, he had added two more units. He had a way to attract lenders or partners to come and join hands with him. To make it big, he sold the cycle parts and yarn businesses in 1980 and relocated to Mumbai and started as a trader of imported stainless steel, brass, plastics, and zip fasteners.

During a visit to Delhi, he met a harried salesman for Suzuki’s generator sets, sent to India to appoint dealers in India. When he learned about the product, Mittal assumed that people would buy Suzuki’s portable generators to use in ice-cream vans and exhibition kiosks. That was the first colossal possibility he saw in his business life.

He calculated that shop owners, small offices, and even families would buy the product because of frequent power cuts. Thus, he became the first dealer of Suzuki’s portable generators in India. The market was good, sales were brisk, and Mittal was soon selling throughout the country.

However, the government made it mandatory to have licenses to make portable generators in India. In 1983, the licenses awarded to make portable generators to two big business houses instantly crashed Mittal’s business. Even though Suzuki offered to make Mittal a dealer for its new small car, Maruti 800, a revolution in the Indian automobile market, he could not secure the dealership.

Wishing for possibilities from life, Mittal decided to go abroad and scout for opportunities. In a trade fair in Taiwan, he saw push-button telephones for the first time in his life, while Indians were still using clunky phones that came with a rotary dial.

He signed a contract with a Taiwanese supplier even though telephones were not on the government’s priority list for imports. Soon, the government opened up the industry and issued 52 licenses to make telephones in the country. Mittal jumped in and secured one of them.

The German-sounding Mittbrau was the brand name he chose to make it sound foreign, assuming that Indian consumers don’t like homegrown brands. Mittal then moved to a new brand called Beetel and soon diversified into EPABXs and fax machines by the early 1990s.

Mittal saw a newspaper advertisement towards the end of 1991, which said the government had drawn up plans to induct the private sector into mobile telephony. He found out the next big possibility at that moment and decided that he would bid. He got the Delhi circle and launched services in 1994 under the Airtel brand. And the rest is history and created possibilities for internet users in the country through communication technology.

Jyothy Laboratories Pvt. Ltd. was incorporated in 1992 and commissioned its Chennai factory to make Ujala. They commissioned their Pondicherry plant in 1994 to make Nebula, an oil-based antibacterial washing soap, in Kerala in 1995. The company became a public limited company on October 6, 1995, and launched Ujala all over India in 1997.

Jyothi Labs’s second brand, Maxo, came to life in 2000 and then launched several household products after that, and each of them became a hit. It was the acquisition of Henkel in 2011 that provided new opportunities for Jyothy Labs to flourish. In 2014, it re-launched most in-house brands.

Jyothy Labs was a debt-free company but decided to go into debt by acquiring Henkel India. Though Henkel is a loss-making company, acquiring Henkel was not an impulsive decision, as the brand proved to be strong as per audit. With the acquisition of Henkel, Jyothy Labs got a good portfolio fit with brands like Pril, Henko, Margo, and Fa, a possibility that Ramachandran eyed.

Ramachandran’s next move was to start manufacturing Henkel’s brands in Jyothy’s manufacturing facilities, spread across India. When Jyothy bought the business, it had a negative EBIDTA of 4.8%. And within one year, the EBIDTA became 14.8%. Today, those brands are growing faster than Jyothy’s in-house brands except Ujala. In three years, the company also doubled its turnover to Rs. 700 crores from Rs. 350 crores.

Mr. Ramachandran created possibilities by helping investors to generate profit, and then he created and acquired brands that Indians could be happy about.

On many occasions, the path to a medical discovery has been incremental throughout history. And mostly, this begins when an individual looks for possibilities. (Yes, it can be entirely accidental sometimes.) Quinine, a natural substance used to treat malaria for centuries, has a similar story.

The story of Quinine began even before the recorded history in South America. According to a story, a researcher with fever came across of pool of stagnant water and drank from it. As he drank it, he noticed it was very bitter. The researcher was worried that he had been poisoned by the Quina Quina trees surrounding the pool. However, his fever quickly disappeared.

The South American natives who became ill from malaria didn’t understand the cause of the fever. But they knew that using a preparation of the bark of the Cinchona tree could assuage the fever. Cinchona is a plant that grew on the eastern slopes of the Andes mountains from Venezuela to Bolivia.

The Jesuits, who were looking for possibilities in the treatment for malaria, learned about the bark’s anti-malarial properties. They are credited with introducing cinchona bark into medical use in Europe around 1640. It was widely accepted as a malarial remedy by 1681.

By the mid-1700s, chemists became convinced of the cinchona bark’s active property responsible for its curative powers. Two French scientists were looking for the possibility to cure malaria of the Cinchona bark, isolated Quinine, a key active property in 1820. Even though synthetic Quinine was developed in 1944 by American scientists, natural Quinine has been widely used.

Once unknown to humanity, a plant became the gamechanger when people started to observe around and looked for answers and possibilities from nature.