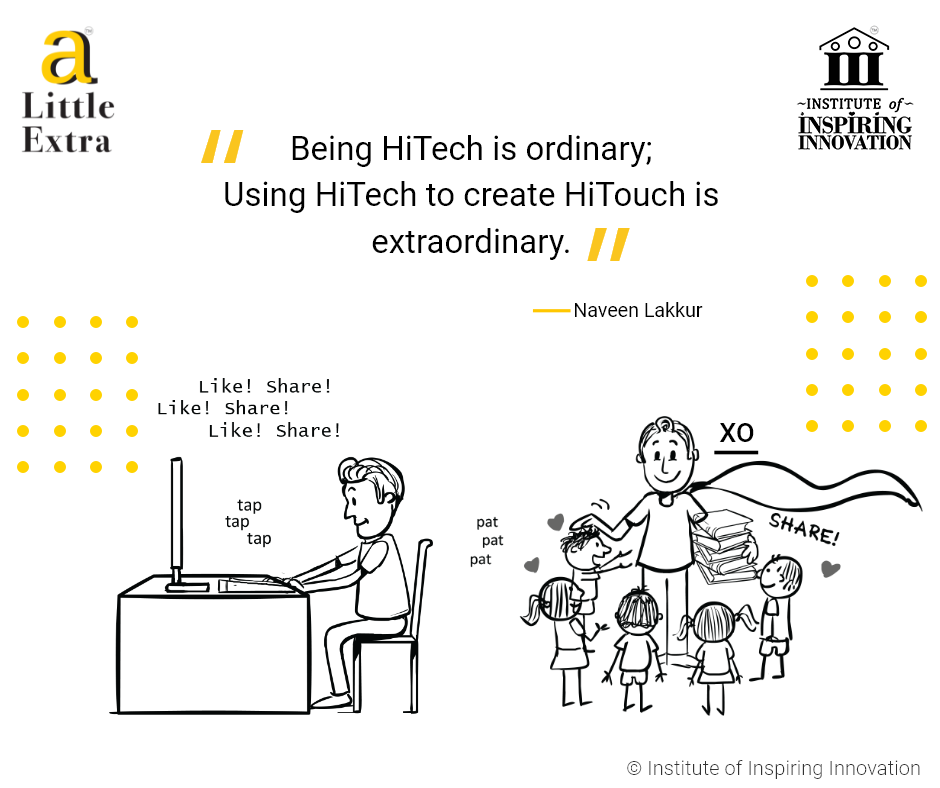 “Being HiTech is ordinary; Using HiTech to create HiTouch is eXtraOrdinary.” – Naveen Lakkur

Technology and human advancement have gone hand in hand for centuries. People who have no problem in learning to adapt to the HiTech ways are able to improve their quality of life. We are also seeing a lot of technological advancements focused more on inclusivity and bringing people together. Some people tap into technology, go a Little Extra to ensure that all groups of people are gifted with the same experiences worldwide with HiTouch. Let us look at a few stories.

Upasana Makati was another ambitious girl from the bustling city of Mumbai. After her graduation in mass communication from Canada, she took up a job at a PR firm in Mumbai and wanted to create a difference, change the world. It was during her PR firm stint in Mumbai she came across a random thought. Upasana was thinking about what blind people read in their leisure time, a completely random thought which changed so many lives.

She immediately got on to the world wide web to verify and was taken aback at the results. With data from the web, she began her journey. She approached the National Association for the Blind to start her research where she was told that there were no dedicated magazines for the visually impaired. There were however a few irregular newsletters that the association compiled every three months for the subscribers on its list.

In 2013, the idea of White Print, India’s first lifestyle Braille magazine for the visually impaired, took shape. She then went a Little Extra and started talking about her new venture to the visually impaired and was encouraged by them to pursue the idea. Instead of registering a NGO, she ran it as a full-fledged company.

She soon ran into the challenge of bringing in advertisers as no companies published in Braille, and neither was anyone willing to do so. Upasana kept drafting emails to advertisers but they were hesitant to do so as they were unsure of the returns. She turned to big ships like Ratan Tata, Coca Cola, and the likes. And then, she began receiving ads for the White Print magazine. Coca Cola made a sound chip and installed it in every magazine.

She familiarized herself with the software that converted text to Braille and began going through the logistics of producing a Braille magazine, something that has never been done before. Going by the messages she is receiving, her readers love the magazine.

One day, a girl called up Upasana after receiving her copy of the White Print. She told her that she received the magazine in the morning, and she had already completed all the 64 pages. She asked her if she could send her the next one? She also said that it was fascinating for her because she could read it herself and did not depend on anyone else to read it out to her.

As of this writing, around 300 copies of White Print are in circulation. As the company and its readers grow in number, Upasana also wishes to expand her line to other languages. She enlisted the help of HiTech to create opportunities and experiences for others’ upliftment with HiTouch.

Story 2 – Empowerment of the Hearing Impaired

According to India’s National Association of the Deaf, the number of deaf people is estimated at more than 18 million. Nupura Kirloskar and Janhavi Joshi, classmates at the industrial design course at MIT Pune were inspired by a dance performed by a group of deaf people despite not hearing any music.

They realized a need to extend experiences to the hearing impaired. Founded by Nupura and Janhavi in 2015, Bleetech aims to nullify barriers between the hearing-enabled and the deaf by leveraging design and science. What started as a college project, it took off when IIT-Bombay’s Society for Innovation and Entrepreneurship and Tata Trust’s Social Alpha agreed to step in as investors and incubators.

BleeTech began as ‘Blee Watch,’ which was a working model. Its key features included notifications for important sounds such as the ringing of a doorbell, the cries of a baby, a fire alarm or an alarm clock, conversion of typed text to speech, and location sharing to five emergency contacts in case of an unsafe situation.

In 2018, they started BleeTV, an app and a web portal covering financial literacy, current affairs, English language, science and technology, and self-help in sign language. They later expanded it to BleeTV Library, which had content curated for deaf children. The firm then donated access to BleeTV Library to schools in Pune. Many organizations including the Red Cross Society School recently picked it up so they could give it to the deaf.

Nupura and Jahnavi are visionaries, trying to bring forth inclusivity. It is indeed commendable to grant millions of students and adults the chance to experience life as others did. They used HiTech to empower communities using HiTouch.

Story 3 – Easing Ingress and Egress for the Differently-Abled

Bengaluru based entrepreneur Anand Kutre began his career in Pune after finishing his engineering degree from Gogte Institute of Technology in Belgaum, Karnataka. He then went to work for a few years in the United States and then he came back to Bangalore.

In 2006, he co-founded Augen Technologies, an engineering services company. After four years in the company, Kutre decided to step down so he could make innovative products with Truce Consultancy, a design consultancy company that he founded. The start-up was aimed at developing innovative technology that could make a difference.

Kutre and his team went to the drawing board to come up with a design to make the automobile world a little more inclusive. Truce Consultancy worked on its design and created a seat with an inbuilt assistive mechanism to allow easy ingress and egress to those with special needs. TurnPlus allows chairs to swivel out and in.

Turn Plus turned out to be a blessing not just for people with disabilities but also for those suffering from back pain, knee pain, and arthritis. It could encourage the old to try it as most shy away owing to the difficulties of getting in and out.

Anand Kutre is out there changing the world, making it better and more accessible. He has embraced technology and integrated it with the need to make society more inclusive. It is truly an extraordinary feat to use HiTech, with a Little Extra courage and determination to embark on a HiTouch product to make lives more comfortable and better.