Being a Thought Leader is eXtraOrdinary 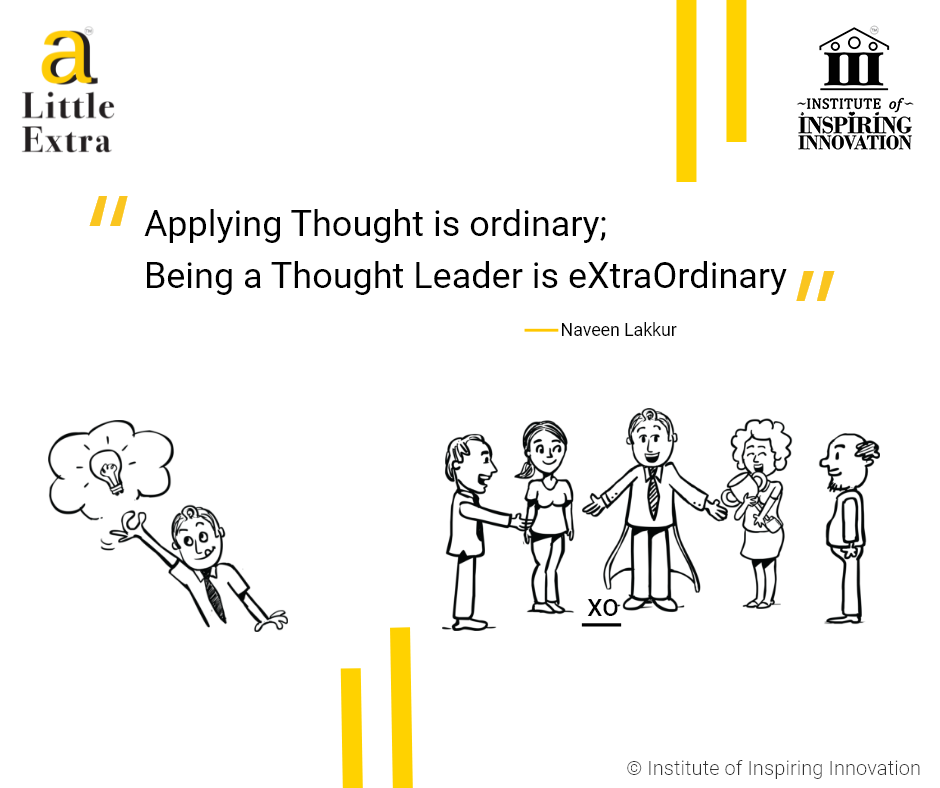 “Applying thought is ordinary; Being a thought leader is eXtraOrdinary.” – Naveen Lakkur

In 2009, enterprise segment giant Satyam Computer Systems was twice the size of Tech Mahindra. Satyam had customers, shareholders, and a board with Ramalinga Raju at the helm. The company that prided itself on high corporate governance was rocked by the scandal. There was a sense of shock in the country.

While the board tried to assure the customers that everything will be alright, the government was on the war-footing to save the company and thousands of people’s jobs and investments. Deepak Parekh along with Kiran Karnik was tasked by the government to find a buyer within 100 days. Eventually, Tech Mahindra outbid everyone else and absorbed the flailing Satyam, saving it.

This was not the first time he saved an organization. In 2001, he turned around Unit Trust of India (UTI), an asset management company, which was one of the firsts in his journey as a thought leader and the savior of failing companies. He proposed a rescue plan to the government for the revival of UTI. He oversaw the merger of Times Bank with HDFC Bank to give a differentiated banking experience to many Indians.

In 1998, he stepped into IDFC, which finances infrastructure projects in India. IDFC provides a full suite of financial services, on its way to become a bank that may compete with HDFC. His penchant for doing things right made him the man people would go to for advice. Young professionals go to him for advice, and he even finds policymakers and the government at his doorstep, a corporate crisis manager for the government.

He has also stepped into the non-finance world too, Satyam being a prime example. He has been involved in insurance reforms, banking reforms, and he also gave his views on universal licensing in the telecom sector. He has also not shied away from criticizing policymakers when they were not working for the interests of the country and its corporates.

Known as the voice of corporate India, Deepak Parekh is a statesman and has achieved in the world of finance. His day is so crammed that people say that he works 48 hours a day. His consistent application of thoughts in the corporate sector made him a thought leader.

In 2007, Arianna Huffington, when Huffington Post was just two years old, she passed out at her desk while checking her emails and making phone calls. She woke up in a pool of her own blood in her daughter’s presence. She had overworked herself into exhaustion. It was at this point she realized the importance of sleep.

When she started sleeping well, she saw a transformation in her business. Sleeping well, she says helped her make good business decisions too. While on one side, she was becoming a champion of wellness and good sleep, on the other side, Huffington Post’s editorial staff consistently broke important news stories that today attracts eight million unique views a month.

The online media giant grew because of citizen journalists who wrote about technology, politics, and other socio-economic things. Through the website, an army of journalists, editors, and engineers shared thoughts and ideas, solved problems, and come up with a system that could inform, inspire, entertain, and empower audiences worldwide.

The website consistently put out not only great thoughts, but it could also influence elections such was its position as a thought leader. The website also attracted the attention of hundreds of other thought leaders who began sharing their thoughts and ideas on the website. After its sale to AOL, Arianna Huffington started Thrive Global with a focus on health and wellness, good sleep using behavior change technology.

Huffington Post has more than 4,000 contributors, from politicians and academicians to entertainers and leaders.

Story 3 – Bringing Cosmology For the Masses

The most recognizable scientist of modern times, Stephen Hawking battled with amyotrophic lateral sclerosis, a degenerative motor neurone disease, and was confined to the wheelchair most of his life. He was unable to speak and used a voice synthesizer to say his thoughts. He stands out due to his contribution to the field of Cosmology. He is known to have made black holes, time, and space easy to understand for ordinary people.

He became known because he had a knack for explaining complex concepts and thoughts in a simple manner. He made scientific concepts accessible to the masses through his 1988 book, ‘A brief history of time,’ that set a Guinness World Record by staying on the Sunday Times best-seller list for 4.5 years.

Very early in life, he started his research on black holes and also wrote an essay on black holes that won him the Gravity Research Foundation award. He was part of many scientific societies and communities. However, he had an interest in telling ordinary people about his thoughts on space and black holes, and other concepts of Cosmology.

In order to help people who did not understand these concepts like time, space, black holes, and the Big Bang, he published ‘A Briefer History of Time’ in 2005. Because of his cult status, he appeared in popular television shows like Star Trek, The Simpsons, and The Big Bang Theory. His love for offering thoughts transferred to his daughter Lucy Hawking.

He also wrote five children’s books with his daughter Lucy combining science and fictional adventure with a boy named George who travels around the universe. He died at the age of 76 after losing a battle to the disease. One of the most brilliant theoretical physicists in history, his work not only talked of the origins and structure of the universe, but he also appealed to readers who may not have the same scientific pedigree as Hawking.

He consistently offered his thoughts on Artificial Intelligence, the advent of technology, and other concepts, that most scientific magazines and publications looked for his advice or forewords, becoming a thought leader in the process.

He was diagnosed with the disease at the age of 21. Doctors predicted that he will not make is past 30. He lived for 55 more years. He is known to have said, “The human race is so puny compared to the universe that being disabled is not of much cosmic significance.”