Thinking we are something and can achieve anything is eXtraOrdinary

Home Articles a Little Extra Thinking we are something and can achieve anything is eXtraOrdinary
Naveen Lakkur / a Little Extra, Quotes / 0 Comments 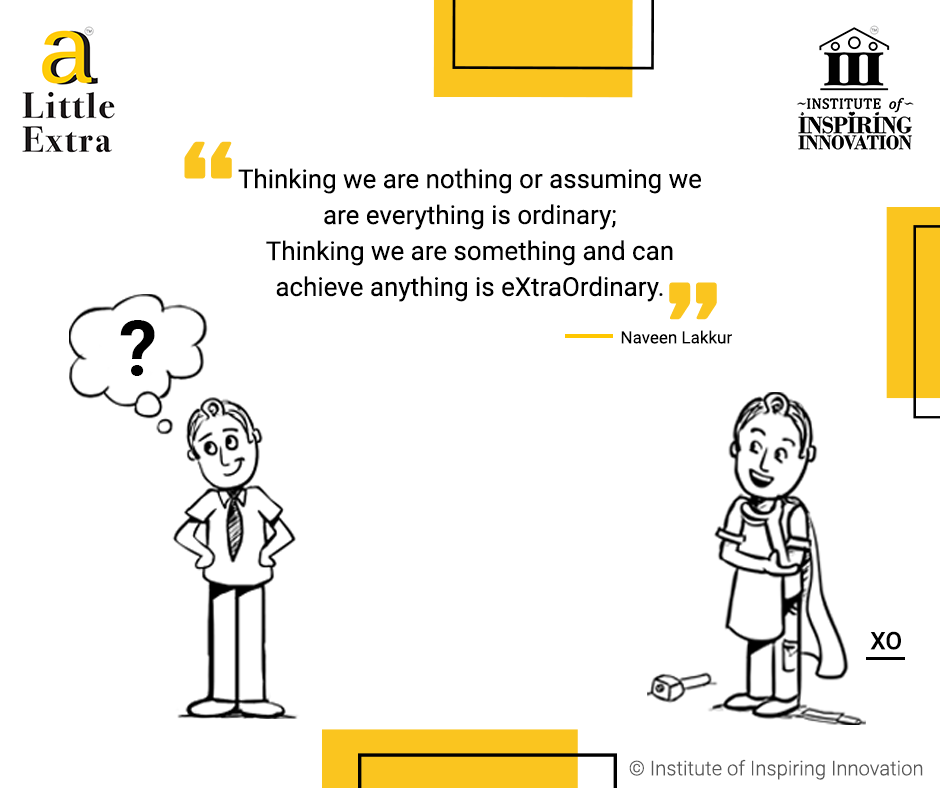 The world is full of humble or proud people. While both work for their self-esteem, it may or may not reflect in their success. Some people believe they are something, they put a Little Extra effort to create and achieve something useful, with their self-confidence to create anything. They produce extraordinary results.

The question is how do they do it.

Referring to our ‘Change Acceptance Model’ which has 5 stages, the very first being ‘Acceptance’, they realize the truth of ‘nothing’ or ‘everything’ as their perception which can mislead them towards suffering. With a little extra courage and willingness to change things for better, they move to the second stage – ‘Analysis’, where they gather data, facts and have a better understanding of the situation with a stage set to create a new purpose, which is more meaningful.

Here are a few examples of people who encountered the situation which got them to perceive its end of life, as they felt they had lost everything. With a Little Extra courage or self-belief that they are something and can create anything, they have demonstrated extraordinary results.

Story 1 – Economics of Wanting to Achieve

Manan Mehta had a heartbreak at 18. It made him recognize his own insecurities and gave him the drive to do meaningful work. He also did not allow depression to impact his life. In his travels, he also got to teach in South Africa where he encountered kids carrying guns, drank all weekend, and did drugs. But according to him, he looked for experiences in various ways to become more self-aware. He went to Warwick for further studies and get a Bachelor’s degree.

At university, he gave a TEDx talk on ‘Economics of Happiness.’ According to him, there are 100 reasons to be happy, money can buy 70 of them. The defining moment came when he and four of his friends won an international hackathon event co-hosted by the NITI Aayog and the International Blockchain Congress. Their idea was for the idea of implementing of blockchain in the Indian solar industry, which is an innovative idea.

With a thought that India can use its massive capacity to increase power generation through renewable energy, Manan and his team co-founded Unergia, a solar asset management company that installs solar panels on residential and commercial buildings. The team also crowdfunds solar projects with a promise for investors with high returns of funds. Besides, roof providers will receive cheaper electricity.

His conviction to be a Little Extra busy and achieve something, bring peace and happiness to people made him an example.

Michael Brody-Waite grew up in a caring family. Though he grew up with a dream to become a CEO, he became a drug addict early and got him evicted from school. He was homeless for a while which was a wake-up call for him. He attended a de-addiction program and recovered eventually.

Micheal was taught to practice authenticity, surrender the outcome, and do uncomfortable work. His honesty about his past, focus on what he could control and his authenticity changed his life. When he was living in a halfway house, Michael was told to find a job soon. At an interview with an entertainment retail store, he revealed his past honestly just like his sponsor told him to with an intention to stop worrying about circumstances of being honest because circumstances are not under one’s control.

To his surprise, he got an offer to work there. He worked hard to overcome his addiction even while at work. He worked so hard that one of his jealous coworkers spread the news that Michael started using again to prevent the promotion from going to him. His dreams and thoughts of becoming a CEO came soon.

The idea to start InQuicker, a self-scheduling online platform for doctor’s appointments came due to scheduling problems with doctors. He partnered with a software developer to complete the project. Recently, he became a public speaker, and an author and talks about his learnings as a drug addict. He also served as the CEO of Nashville Entrepreneur Center, a position he was appointed to after he sold InQuicker. The passion to think he could achieve anything made him successful.