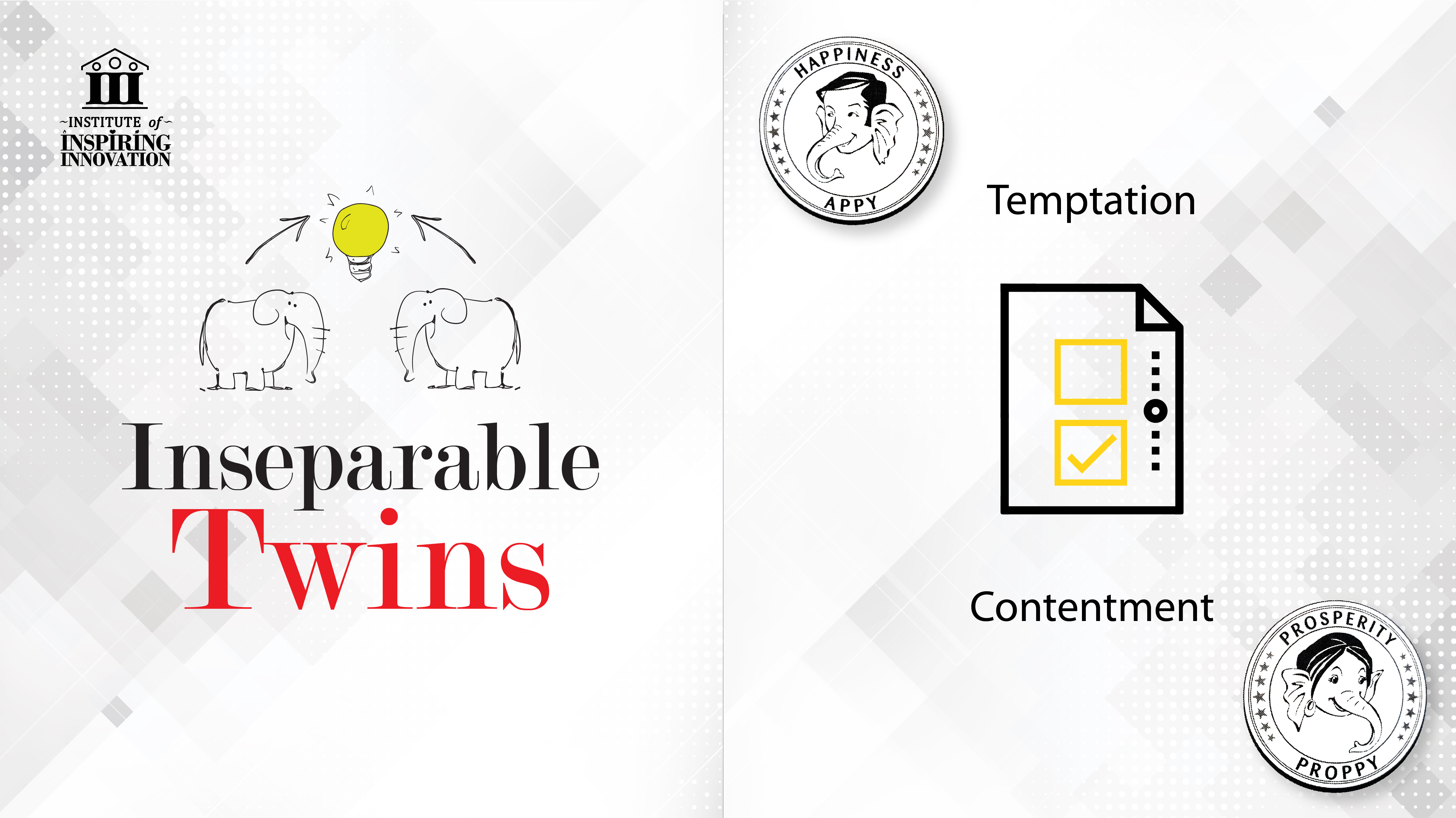 Proppy held a tree and pulled herself up. She was the first one to speak and said, “I am a self-starter, and I look for ways to build the willpower to keep it going.”

Appy was happy to know that he was not the only one to feel this way, and said, “Maybe you should consider temptation as the means to get to the top. On the other side of the hill, a delicious breakfast awaits.”

Proppy retorted, “Lucky’s yoga practice is helping him I suppose. Besides, I am content with what I have. We do not need to eat for the second time this morning. Besides, the temptation is a sin as per scriptures.”

Appy, who saw another fruitful debate brewing, said, “Temptation may be sin, but I use it as a tool to channel willpower. And I think contentment makes you mediocre. It makes you think there is nothing else to look forward to.”

Proppy with interest asked, “How will temptation bring out willpower? Pray tell.”

Appy helped himself on the top of a rock, rubbed his hand, and said, “All of us struggle with willpower. My supervisor once told me that he does not want to work but has to. Visit to the city and you say human kids give all kinds of excuses like ‘I don’t want to go to the gym today’, ‘I just cooked a nice meal but I cannot do the dishes’, ‘I have something else to do, somewhere else to go’, among others. I think it is not like we should not enjoy ourselves. Life isn’t worth living without some enjoyment, but you cannot abandon the things you really need to be doing. This is where you must practice ‘temptation bundling’.”

Proppy climbed on the same rock as Appy by pushing him a bit on the other side. She turned towards her twin and asked “tell me more about it”.

Appy said, “The term was coined by Katherine Milkman, a behavioral economist and an assistant professor at Wharton University, Pennsylvania. She suggests using rewards guilty pleasures that give instant gratification to invoke willpower to also get things that are not pleasurable. You should be doing it both at the same time.”

Proppy replied, “So, you kill two birds with one stone. I understand now. You want to go to the gym but want to catch up on the latest episode on Netflix. You can watch the episode at the gym while you exercise. You use Netflix as a motivation to gather the willpower to exercise. You are anxious about the next episode, but the only way you can find out how the next episode went is by getting on the treadmill the next day.”

They looked up and when their eyes met with Lucky, he waved at the twins signaling to hurry up. They waved back and sped up their climb. It was a matter of little distance to where Lucky was.

“What happens if you miss the gym or that productive task,” asked Proppy.

“The system will not fall apart if you binge-watch Netflix. Falling off will result in you being content leading to mediocrity,” answered Appy.

Taking this as the cue, Proppy began her take on contentment while absent-mindedly kicking stones away, “Most people will try to find and maintain various levels of happiness. But I believe in contentment, and it is not a sign of mediocrity. Let me explain.”

Appy listened intently and followed his twin. Proppy continued, “Striving for contentment is freeing your mind to focus on living a meaningful life instead of a life in pursuit of happiness. Contentment is a state of emotional and mental satisfaction, but it does not mean we’re left without ambition. I’d say that contentment isn’t a matter of settling for mediocrity, but happiness is an emotion that’s being settled for. Chasing only happy moments mean that our brain will move away from ‘homeostasis’ which is nothing but the natural state of being, then coming back to our natural state may feel like a loss.”

“I got you. But where you learn to be content. Most of us have chased after happiness,” asked Appy while they were within an earshot of Lucky.

Proppy was the first to reach near Lucky. She faced her twin and said, “I believe that culture also plays a role in contentment. Eastern religions like Buddhism urges its followers to be content with who they are. Collective cultures like Japan, China, and India have a greater emphasis on harmony, contentment, gratitude, and mindfulness, while individualistic cultures like the West focuses on oneself. Western cultures are embracing being content and showing gratitude. These days many of them are practicing what is called ‘minimalism’, which is already deeply ingrained in Eastern cultures. People there grow up practicing content. They keep enough things only around them to be happy.”

When Appy reached the finish line, he said, “I believe so. But that still has not explained how being content is not mediocre.”

It was Lucky who spoke this time. He took a sip of water and said, “For me, contentment is a foundation from where you can plan and achieve more, take risks, learn more and grow, and more. Essentially it’s appropriate point for shifting gears from worrying about self to serving others”

Lucky said, “Let me explain to you with examples. Car companies like Ferarri and Lamborghini were established out of temptation. They looked for a car of their dreams but did not find it. So, they had to create it. They did not invent the motor car, but through innovation in engine technology and design, they came up with a better car that sold to niche car buyers. I will say temptation fueled innovation in this case. The temptation here when channeled wisely is nothing but a necessity, a desire to make something a possibility.”

The twins were listening intently and Lucky continued, “while they sound opposite, temptation channeled in the right path will lead you to Contentment and Contentment should become an inspiration, with a temptation to have a renewed purpose and make a difference. When the goal setting is not attached to the self, then you will find contentment, which is fuel to get more things done and achieve more.”

“I would like to mention Thomas Alva Edison. Though he could have been content with only inventing the light bulb, he went on to manufacture it and make the light bulb available to many people to eliminate darkness by choice which led to establishing General Electric (GE). Contentment in the right spirit should inspire you to get tempted to identify worthy problems to solve and solve them, which leads to further contentment. For there, it is a cycle. Even after Edison’s passing, temptation and contentment have been the twin inspiration for people that worked there to fuel innovation.”

Appy looked up at the sky and said, “what a great lesson to learn. Though the temptation is a sin according to some religions because it creates unnecessary desires, if channeled wisely it can be the source of innovation.”

Lucky had somewhere to be. So he said his goodbyes to the twins and left. The twins knew they would now apply all their learnings and do well as entrepreneurs with Lucky’s mentoring and advice.

The twins headed towards the lumber yard. Appy turned to Proppy and said, “We thought people should not have or create desires. But turns out that with a right mentor temptation & contentment could be a twin force as inseparable twins that drives innovation & entrepreneurship.”

Proppy followed her brother and said, “Correct. They can be agents to fuel innovation, individually and collectively.”