Strategy and Tactics as Inseparable Twins 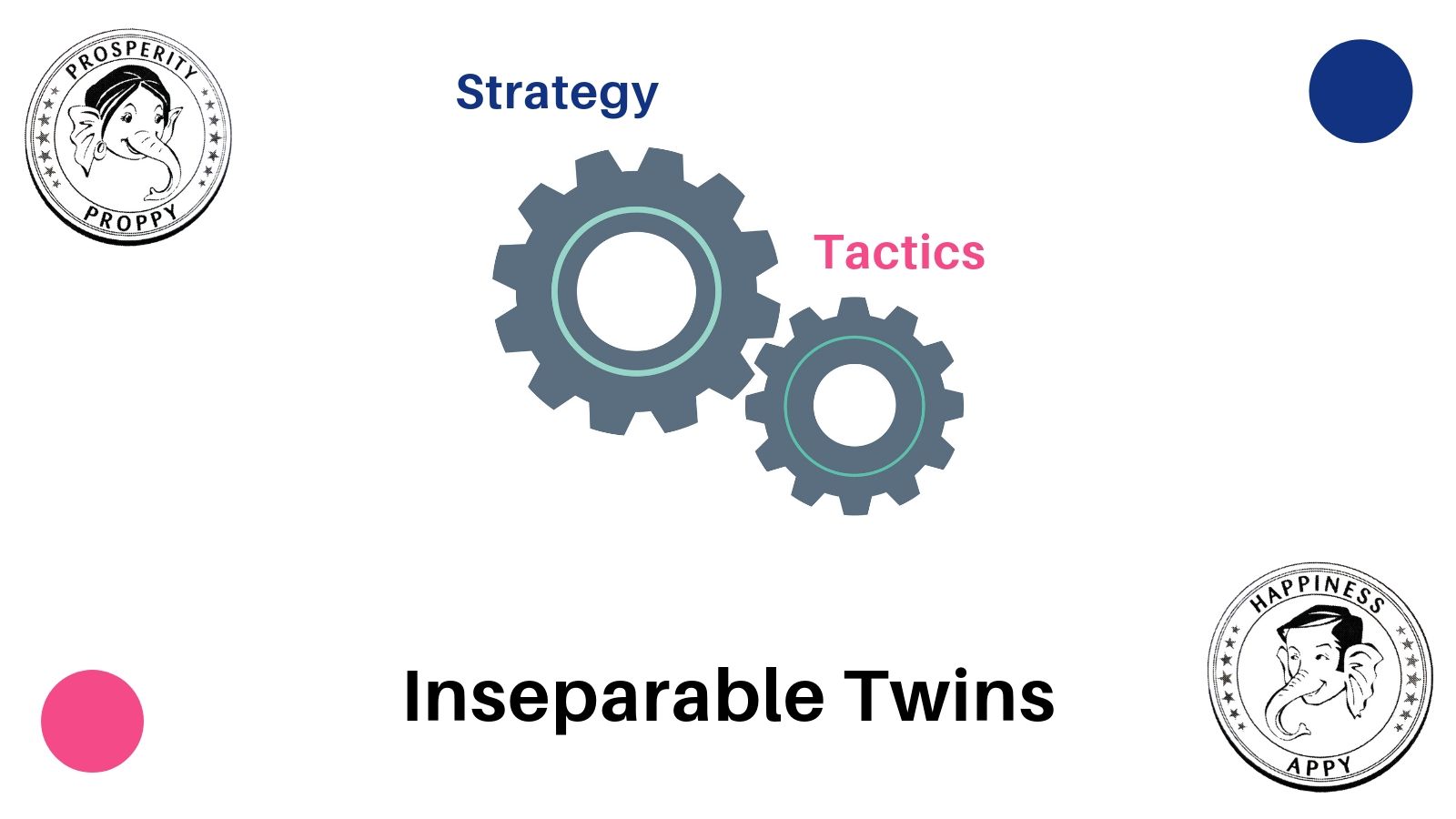 The ground was fenced off to keep animals away from the stadium. Appy and Proppy, as usual, sauntered to their favorite spot — a bench made of two vertical stones ten feet apart placed on a log. They sat on the bench and began watching the ongoing football game with interest.

A football game was being played by two teams, with one team wearing red jerseys and the other wearing blue. It was hard for the twins to say who was winning the game, but both teams played hard. The incessant rain had made the ground extremely slippery and wet. People huddled under umbrellas and watched the keen contest from the stands.

The players, meanwhile, were having a tough time. Some of them kept slipping on the ground. A player from the blue jersey team fell hard and had to limp back to the dug-out for some immediate medical attention. The players noticed the twin elephants watching the game and stopped their game to stare at them. There was a frantic whistle from the referee to get both teams to concentrate on the game and not on the strange sight in the audience.

The elephants understood and loved the game. They had read a rule book in the library at the lumber yard. They also loved to argue and debate about the nuances of the game. Which is why they were delighted when a red jersey midfielder made a long pass to a striker. He deflected the ball to his co-striker, who faked a pass to a teammate. The goalkeeper and the defenders of the blue team were caught off guard. The striker saw an opportunity and put the ball in the net.

The red team dug-out roared with cheers. There were cheers from supporters of the red team and people supporting the blue team had their hands on their head with a look of disappointment.

Appy who was supporting the red team clapped and said, “Faking a pass was a great strategy”. With his eyes on the game, he said, “Well done red team. Go for another one.”

Proppy with a sigh said, “My boys in blue will make a comeback. Wait and watch.” She looked at Appy and said, “by the way, it was a tactic, not a strategy.”

Appy said, “I think they are the same. They can be used interchangeably.”

Proppy who was surprised by Appy’s answer said, “They are of course different. I have heard Lucky use them a lot.”

“What is it then?”, Appy retorted.

Proppy pointed towards a tree and said “Well dear brother, a strategy is a long-range blueprint of an organization’s expected objective. It is the plan to reach a destination,” she said smugly.

Appy picked up a loose stone lying near and expertly threw it at that tree and the stone sailed into a hole in the tree and said, “Well sister, tactic is the action carried out to get to that destination.”

Proppy clapped her hands and said, “Yes, you figured it out. While a tactic is a quick action, the strategy is the action plan.”

At the moment, they heard a voice from behind them. “While a strategy is purpose-oriented, a tactic is all focus on the task.” 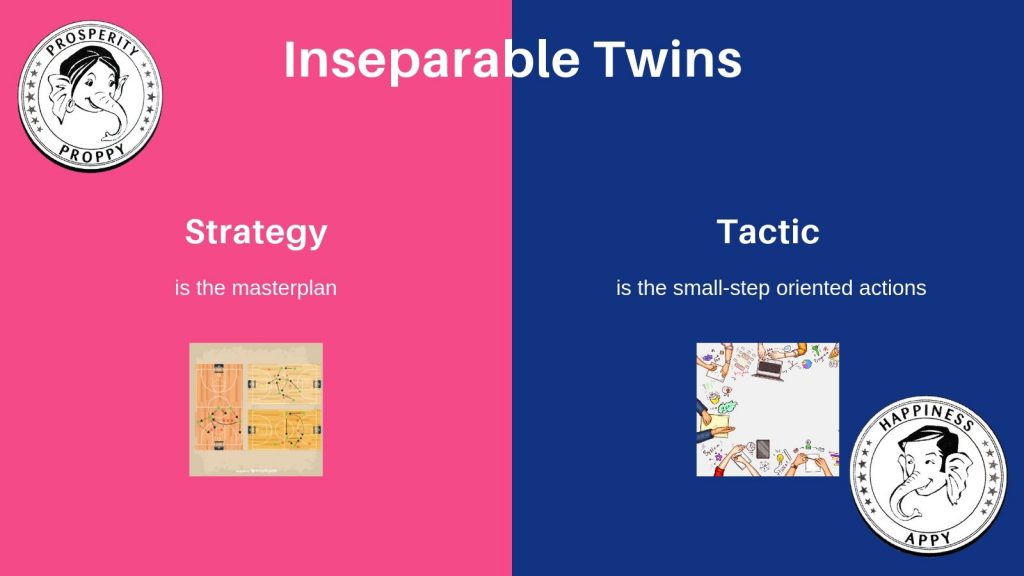 The twins turned around and were surprised to see Lucky walking up towards them. “Hey Lucky”, they screamed in delight.

Appy stood up to shake Lucky’s hand and said, “The last time we spoke, you were halfway around the world.”

Lucky smiled and said, “Here I am, half a meter in front of you.”

Proppy asked, “How did you find us here? We never mentioned this place to you.”

“I was at the ground. I was invited by the football authorities to distribute prizes to the winners and the runners-up”, answered Lucky taking off his glasses. “I looked up with everyone and I saw you two grinning away to glory. I left the ground, drove to the forest and came up here.”

Appy asked looking down at the game, “Who do you think will win?”

Proppy shot back, “Whoever with a better strategy. Right Lucky?”

“Yes, actually the team with better execution of tactics on the ground,” interjected Appy.

Proppy with an anxious look asked, “Which one handles a difficult situation easily? Tactic or Strategy?”

Appy immediately inquired, “Why are tactic and strategy interchangeably used?”

Lucky sat on the bench while the twin elephants chose to stand. He said, “Most people use these two words interchangeably, but they are more powerful if we know the distinction & use them wisely. To answer Proppy’s question, both these are not used to get into or get out of difficult situations. Strategy is the master plan designed by an organization to achieve its objectives.”

“The strategy is used by the top management like the CEO, Board of Directors and senior executives to attain a market position, be competitive in the market, and ensure operations are carried out efficiently. The end goal is decided after the top management talks to different departments,” Lucky added.

He looked at the elephants and found them both nodding with interest. Lucky continued, “Tactics is something you can sometimes see or which is physical, more of an action. While strategy is the path which you want to walk on, and tactic is how you do it. Both of them are used in business for growth, sports for winning the game and also by military generals to win wars.”

“I have had enthusiastic executives come to me with business plans to get it reviewed. I have reviewed goals and objectives. However, on many occasions either they mention tactics they want to use to grow their business or their strategies to succeed, but not together. It is powerful if both strategy & tactics are present. Sun Tzu, who wrote ‘Art of War’, said that strategy without tactics is the slowest route to victory. Tactics without strategy is the noise before defeat.”

“What do you tell such enthusiastic executives?” asked Appy.

Lucky shrugged and said, “I tell them to go back and work on a long-term strategy and tactical or concrete small steps to get to their initials hurdles.”

Proppy raised his eyebrows and said, “So, strategy is like developing a product road map, and being tactical means creating a prototype of the product.”

Suddenly a roar arose from the stadium that made everybody look towards the playing area.

A blue team’s forward sent the ball in between the legs of the defender, got control of the ball and passed it accurately to a waiting striker. The striker then headed the ball expertly towards the net. The ball went wide of the diving goalkeeper and into the net. This was the first goal for the blue team and an important equalizer.

Proppy jumped in delight while Lucky and Appy stood to clap.

“What an amazing play. A talented bunch of kids. I am sure some of them will be role models for future players,” said an impressed Lucky.

Proppy said, “I guess good business strategists and tacticians are required as role models too.”

Lucky shook his head and said, “Yes. For sure. Being tactical is also about following best practices, procedures, using resources optimally while keeping an eye on purpose, goals, and vision. Strategy is future-oriented, while tactic is used to cope with the present situation. Of course, there are short-term strategies too depending on context and situation.”

Appy concluded by saying, “Strategy and tactics rely on each other after all. They must work hand in hand.”

Proppy agreed and said, “Correct. Sometimes, you may earn tactical wins but not strategic victories.”

Lucky was delighted at how the elephants were learning. He woke up, stretched his hands and said, “Do you know how Kent, the manufacturer of RO water purifier grew so big? They employed a combination of strategy and tactic brilliantly in their marketing.”

Appy and Proppy looked at each other and said in unison, “Yes Lucky, please let us know.”

Lucky began, “As a strategy, they were looking for a celebrity to endorse their purifiers who people related to as a homely person. After shortlisting some celebrities, they realized that Hema Malini fit the bill. As a tactic, they gave her a unit of the water purifier and let her family use it. Hema Malini entered a promotional contract with them in 2007.”

An impressed Appy asked, “Are you referring to the famous ‘dream girl’? He continued, “What a wonderful strategy to endorse their product. She is also a satisfied user, it was indeed a good tactic for the company to make her use the product. She then endorsed it because she liked it, a perfect showcase.”

Lucky pointed his finger at Appy and said, “That is correct. In marketing, some of the tactics used to spread awareness and sell are word-of-mouth. Kent used celebrity endorsement as a marketing strategy, and they engaged saleswomen to go to apartments to give a demonstration of the product and make sales as a tactic to boost awareness and increase sales”.

Proppy said, “Even the saleswomen must have felt proud because Hema Malini used it and endorsed it.”

Just then the 90 minutes whistle sounded. There was an announcement that the winner will be decided by a penalty shootout.

Lucky got up from the bench and bid goodbye to both elephants. “We will have a winner for sure. I need to head back to the ground. It was nice discussing and watching the game from up here.”

Lucky drove to the ground while the elephants waved to him. After his car went out of their sight, they sat on the bench to watch the shootout.

Appy took a deep breath and said, “At the last few minutes of the game, the only strategy for the blue team was to equal the score and force a penalty shootout.”

Proppy nodded in agreement and said, “the striker outmaneuvered the defender and passed the ball to another striker as a tactic to set the stage to level the score.”

Appy screamed in delight, “Well done sister. Strategy and tactics seem to be two sides of the coin, it’s powerful if got together as inseparable twins, like us.”

The players from both teams came out to the field from their dug-out. They each took turns to shoot at the goal to decide the winner. Eventually, the red team came out on top with a slim margin that drew thunderous applause from the spectators.

As Lucky presented the winners’ medals, Appy nudged Proppy and said, “my Red team won the game, so you will have to treat me now”.

Proppy remarked, “that’s your tactic to stuff your tummy. I like how it sounds!”