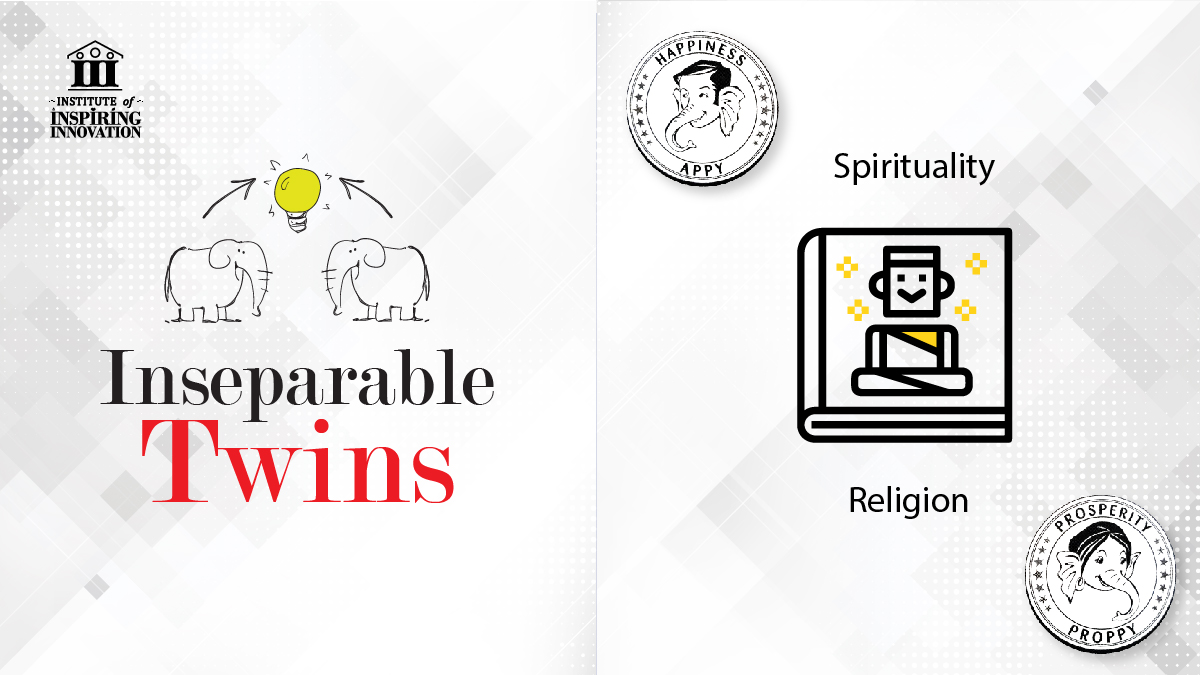 Appy, the male elephant synonymous with happiness and his partner Proppy, a name synonymous with prosperity were on the outskirts of the city. They had decided to spend the weekend exploring the ruins of an ancient fort. Although the ruins had a few visitors, they did not mind two elephants.

The ruins had a very old temple next to a platform that was once the foundation of the fort. The elephants had read online that the temple was a center of learning hundreds of years ago. The elaborate carvings on the temple walls were a testimony to the skills of the builders and sculptors. The two partners stopped at the sculpture of elephants carrying stones depicting the construction of the temple.

Appy ran his hand on the temple wall and said, “I guess it was such a spiritual experience for these elephants and humans who built this temple. Because this temple also served as a school where people studied various subjects.”

Proppy looked up at the temple tower and said, “I assume this magnificent temple might have taken years to build as the materials were not easy to come by. Even the Gods must have come down to witness the construction. I read that its inauguration was such a huge event for this region. Did you know that the legends say that the temple protected the kingdom from their enemies?”

Appy turned towards his partner and said, “People say that everyone has a god within them. I am not ruling out religion, but being spiritual is just as much authentic and divine. Spiritual people look within themselves and they do not look for an outside God.”

The elephants sat on a stone near the temple door. Proppy touched the stone gingerly and said, “Yes. Spirituality may be the path for some, but religion is followed by people who believe in the same things. ‘Spiritual gurus’ belong to a sect or religion. They do not deviate from the practices of that religion.”

Appy nodded and replied, “Those spiritual gurus actually have preached about looking at oneself. They proposed that people must work on personal development to reach divinity. People of all religions follow their teachings. Some have reported that these teachings have worked wonders in their lives.”

Proppy took a picture of the temple tower, turned to her partner and said, “Personal development happens when you learn from external sources like parents, friends, and teachers. These teachings of spiritual gurus are awakening, but when you are in a group, you have access to knowledge that you may not be aware of otherwise.”

Appy took the cellphone from his partner, admired the photo she took and said, “Spirituality is found in anything you do and can be attributed to any subject. Sufi saints believe that singing devotional songs itself was a very spiritual activity.”

“Exactly! I am sure that constructing this temple must have been a divine experience for the builders. I think people attained spirituality by following a belief system or a value system. Spiritual gurus too worshipped a higher being,” said Proppy.

How Are Spirituality and Religion One

They both agreed that Lucky, their human mentor could help them know better and gave him a call. The twins took turns in narrating their exchange.

Lucky asked, “So what do you think is needed the most?”

Appy scratched his head spoke, “When people say that they are spiritual but not religious, what does that mean?”

Lucky immediately replied, “When people say that, it means they are agnostic to any particular religion. They are probably evolved or able to see that spirituality is open and embedded in every religion. They also may be saying that irrespective of religion, they see the core essence of each religion, which is spirituality.”

Proppy excitedly said, “Spirituality and religion are interdependent. Both lead to the divine.”

Lucky replied, “If you remove the bells and whistles, what remains is spirituality in every religion. Spirituality itself cannot bring benefit to anybody if there is no channel. Religion is a channel to help spirituality reach and provide that benefit.”

“Religion is a derivative of Spirituality then. Religion inherits the properties of spirituality combined with many rituals and attributes making it functional,” said Appy.

“Correct,” replied Lucky. “Religion itself is an innovation. Did you also know that freedom of religion or belief is not only a human right, but it enables religious communities to shape conditions necessary for innovation needed for sustainable development?”

“That’s an interesting argument. But how?” asked Proppy.

Lucky said smiling, “Both are founded upon freedom. Both need the freedom to flourish and prosper. Both encapsulate a sense of purpose and direction for humanity. There is innovation in religion also. Just like companies and their products, there is transformation and reformation in religion. Innovation is not strictly for technology and society. Sometimes, it starts with religion and then trickles down to society as a whole.”

“I agree,” said Proppy excitedly. “I now understand that religion is a framework or an engine. Spirituality is a necessity because it is fuel.”

Appy jumped in and said, “Religion is created to bring workability, scalability, and sustainability. All religions have spirituality as an embodiment within it. They are like product and packaging.”

Lucky excitedly said, “I think, religion and spirituality provide scientists with the reasoning power to appreciate the domain of science. I think the sciences can help understand the means; religion provides the way to apply our reasoning power so that we can reach a higher degree of knowledge.”

“I think true religion must not cling to revelations from the past, but rather understand the progressive nature of learning as the capacity to develop a more advanced civilization. There are people who may say that there is no interconnection between religion and science, and they say that while science is rational, while religion is irrational.

“The nature of religion must be the source and means of revelation. It is the need to know how to advance society and the role of the individual in this process that needs to be inculcated into everyone’s thoughts. In this article, read the answer Einstein gives a little girl if people of science pray or not.”

Proppy nodded and shot back a question, “I see that people find it easy to belong to a religion. But for some, spirituality is hard. Why?”

Religion and Spirituality Are Also Rooted in Corporations

“Good question,” said Lucky with a smile. “The truth is spirituality is the simplest, but it is presented as complicated. Life is supposed to be simple. The way it is perceived is complicated.”

“I had earlier mentioned that both religion and innovation need the freedom to flourish. When there is freedom, even knowledge flows freely. When there’s plenty of knowledge, people will have no misapprehension about their own religion and others’.”

Appy with a nod said, “Yes, just like innovation. It is perceived as complicated. But it is simple. It is all perception and reality.”

Lucky clapped and then began, “Spirituality and religion can be related to creativity and innovation. Since spirituality is open and wide, it takes the form you would want to present it. So it can be used creatively. It is left to how somebody can relate to or imagine. It is abstract. They will draw their own messages, their inferences, or inspiration accordingly. Whereas religion brings in the structure. There are methodologies and models that translate to rituals. There is a process there. And religion is an innovation.”

“If spirituality and religion like creativity and innovation, what can corporations learn from it. It has been there for millennia,” wondered Proppy.

Lucky answered, “In a corporate set up, there is ever a need for a new product or new service. To differentiate, you need to be creative. There has to be purpose commonality. Spirituality and Religion will provide that purpose and the organizational culture is determined based on values.”

“Large corporates would have values like humans. How do we percolate and utilize that? How does it play a catalyst role? Corporates may get a lot of ideas, a lot of creative ones. But selection happens based on the values of the organization. Many times if the product idea or the solution does not agree with the values, then the companies will not even consider such ideas.”

Lucky agreed, “You can put it that way. Knowing or unknowingly corporations too follow a religion. Product offerings can be termed as religion. It is a medium through which they are able to live their philosophy. Every product is created based on some philosophy or values. If not, they are not following their own beliefs.”

The twins, lost in this invigorating conversation, suddenly noticed that it was nearing dusk and birds flying back to their nests. The watchman on duty at the fort whistled for everyone to leave the fort. As the twins began walking to the exit, they thanked their mentor for another well thought out argument and exited the fort through the gate.

“The selection of ideas or business, how you run operations, everything revolved around values of the corporate. It is the values which is something meaningful, is purposeful. All that happens because of spirituality. What you can draw on values is based on spirituality,” said Appy.

“So, values become processes, then it becomes a culture, which becomes their day-to-day habit. This is synonymous with religion. Values put into practice becomes the religion of the organization,” said Proppy and then concluded, “Now it is time to hurry up and eat. I’m sure Appy should be very hungry.”

They looked behind and saw the last rays of the sun that turned the temple walls orange. They trudged towards the forest while thankful for the wonderful lesson they learned in the ancient house of knowledge from their wise mentor connected virtually.