Seeing a Situation as an Opportunity is eXtraOrdinary

Home a Little Extra Seeing a Situation as an Opportunity is eXtraOrdinary
Naveen Lakkur / a Little Extra, Articles, Quotes / 1 Comment 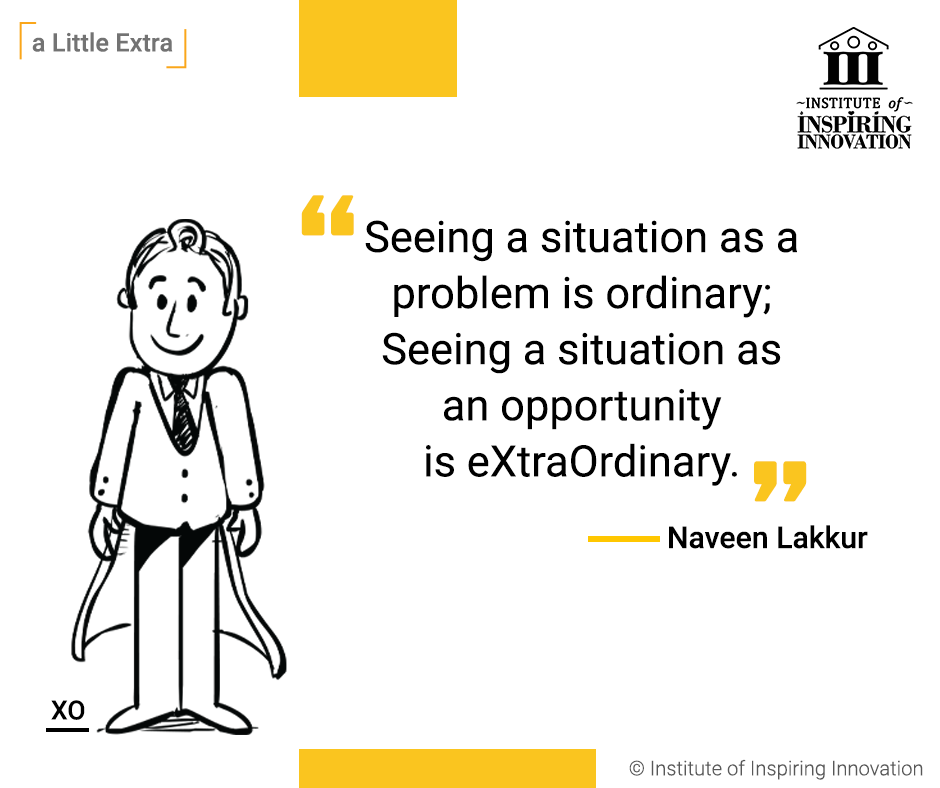 While most people look at a problematic situation as a burden, some people see a situation as an opportunity and become eXtraOrdinary by working a Little Extra and building systems to overcome hurdles and also help others climb over situations.

John Warnock and Chuck Geschke became friends while they worked as engineers at Xerox’s Palo Alto research center. They were working in Xerox’s personal computers and laser printing department. However, there were no publishing and printing software that professionals and businesses could use.

They could somehow see the demand for digital solutions growing. It was taking a lot of time for Xerox to come up with a workable product for the ideas it had, let alone see this as a new business opportunity. Warnock and Geschke, instead of considering this situation as a problem, treated it as an opportunity to bring their ideas into usable products.

Despite a successful career at Xerox, these two 40 somethings took a risk, quit their job, and decided to embark on an innovation journey. They started working on their own by starting Adobe. PostScript, an innovative printing language became their first product. They got positive reviews from the community and with this, they became synonymous with mass digital image production.

Adobe went a Little Extra and set the industry standard, whether it was for file formats like .pdf or .psd, or for the products that were a must install in personal computers, whether it was PostScript, Photoshop, or Acrobat. Their products allowed users to manipulate things visually, rather than with code. They made products that were a market fit. One of the growth strategies they used was to build partnerships with other technology companies.

Steve Jobs heard about Adobe and joined hands. He offered to partner Apple’s hardware with Adobe’s software. This partnership generated attention from other companies too. After PostScript, Adobe released Illustrator in 1987, Photoshop in 1988, Premiere in 1991, and Acrobat in 1993 and coined the term pdf. Post-1995, they grew with mergers and acquisitions.

In 2007, when Shantanu Narayen became the CEO of Adobe, the company took the internet as an opportunity to reach more people and successfully transitioned from a licensed software company into a cloud-based enterprise service provider. Though the transition was an expensive process, Adobe went through the change and carved a place in the changing times. Adobe’s story is a journey of using situations as opportunities.

Leaders simply lead. They work from within themselves, with the courage, emotional intelligence and integrity to navigate the crisis around them. They are prepared; they don't panic. They care and communicate in service of others. Leaders are ordinary people doing extraordinary things. They see the opportunity in a crisis to transform themselves and the world around them.