Realizing that human itself is super is eXtraOrdinary

Home Articles a Little Extra Realizing that human itself is super is eXtraOrdinary
Naveen Lakkur / a Little Extra, Quotes / 0 Comments 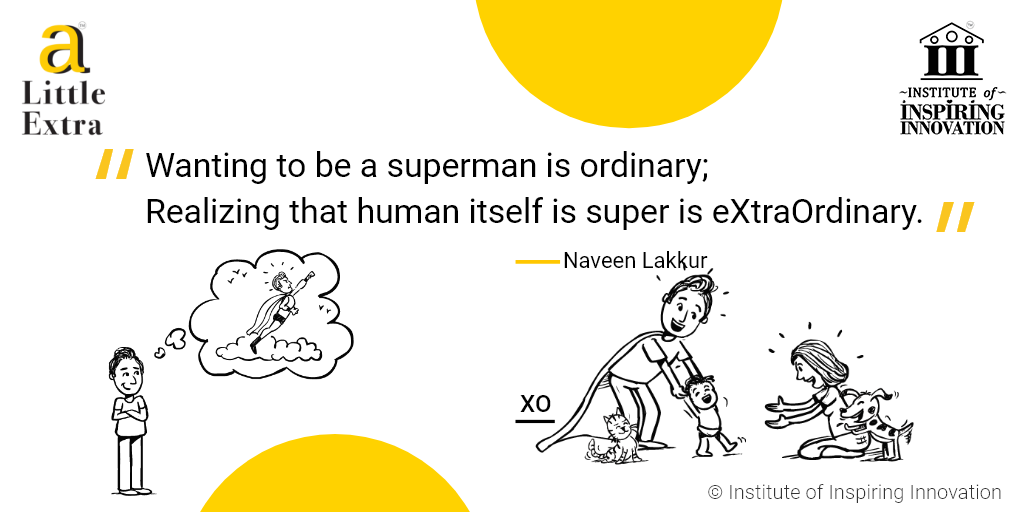 “Wanting to be a superman is ordinary; Realizing that human itself is super is eXtraOrdinary.” – Naveen Lakkur

Children grow up watching their favorite superheroes in cartoons. Few years in, they watch superhero movies and think they can do appreciable things only by being superheroes. They would not have realized that the great men and women they read in their school books were once normal people who went a Little Extra with their deeds.

Some people have realized that they do not need to be superheroes. Instead, they must go a Little Extra, display their humanity, connect with like-minded people to do good things, and to serve others. Let us learn about some superhumans who have helped others.

Story 1 – The Making of an Ambitious Space Organization

Many fine individuals who worked on the Indian Space Research Organization (ISRO)’s projects are no longer around. When you talk about ISRO and its achievements, you have to listen to different people and perspectives.

“From the Fishing Hamlet to Red Planet,” one of the two books commissioned by ISRO, has no single narrative. It is a collection of stories from 50 individuals written at different times. There are articles from Prof. U.R. Rao, one of the designers of ISRO’s first satellite, Yash Pal, one of the key people who made Dr. Sarabhai’s vision a reality, Dr. A.S. Kiran Kumar, who was the Chairman from 2015 to 2018, helped develop a high-resolution imaging system from space, and many others.

All great things have humble beginnings. ISRO had its start from Thumba, a fishing hamlet near Thiruvananthapuram, 45 years ago in a vacant church. They established the Thumba Equatorial Rocket Launching Station (TERLS) in 1962. By mid-1963, the sounding rocket range took shape. The scientists used the bicycles available to transport rocket parts shipped by NASA and assembled inside the church. They transported large parts using bullock carts.

On November 21, 1963, the Nike-Apache sounding rocket was successfully launched from the range, though not on the first try; it was cheered on by the fishermen and the local villagers. It came at the cost of some human life and sacrifice from many scientists. The Tumba facility got a rocket propellant and fabrication unit and a Space Science and Technology Centre.

After ISRO set up the new rocket launch pad at Sriharikota island, off the Andhra Pradesh coast, ISRO went a Little Extra and started gunning big. Even before this, Dr. Sarabhai had started to write a plan to expand India’s space program. As of September 2020, ISRO launched two probes to the moon already, and a third one planned for March 2021.

ISRO’s most significant achievement came on September 24, 2014, when the Mars Orbiter Mission (MOM), a probe to study the Martian surface, also known as Mangalyaan, entered Mars orbit. Though ISRO became a pride of Indian science and the world’s envy, it did not forget where it started. To boost the fishermen’s livelihood, it developed a device to address safety issues, and help them communicate with their families while at sea.

The Android device, which costs just Rs. 3,500, will inform fishermen of the concentration of fishes and warn them of brewing cyclones. When the Android phones are connected to the device on the boat via BlueTooth, the location of the fishing area is shared via an application. The system functions with the help of the India Regional Navigational Satellite System (IRNSS).

Whenever a launch took place, the fishermen would vacate the site so that nobody got affected during the launch. They had realized that they had to vacate the place for the benefit of the country. The scientists and the fishermen realized very early that the being human itself is super and they worked to make other people’s live better.

Manoj Sinha grew up in Bihar in an energy deficient area. Throughout his education, doing something about the power situation was on his mind. He first dabbled in solar, but after realizing how expensive it was, he dropped the idea.

In 2007, he co-founded Husk Power Systems along with his friends Gyanesh, Ratnesh, and a friend from Darden School of Business, Chip Ransler, to offer off-grid power generation and distribution solutions. Husk serves rural customers in Bihar and Uttar Pradesh becoming the first company to use 100% biomass gasification with rice husks to generate electricity for rural households and small businesses.

As an innovative experiment, they set-up a 30-kilowatt gasification unit that supplied electricity to 300-odd families in a two-kilometer radius. However, they could only power homes only during the night. The partners wrote a business plan and sent it to forums and competitions in the USA and ended up winning $100,000 that they poured into the project.

The way it works is like this – the farmers bring their rice bags to the plant where the rice and the husk are separated. While the farmers leave with the rice, they sell the husk to the plant that uses it as fuel for the power plants. The husk is gasified by heating at a very high temperature in a closed chamber. The gas produced is cooled and used to generate electricity, eliminating smoke and smog.

Initially, delivering power was an issue due to the lack of connectivity. Due to the policies and work on connectivity made by the successive governments, an uninterrupted supply of power was possible. Husk Power systems have also evolved with various policies. The farmers also make some money on the sale of the husk. The carbon from the rice husk is negligible.

With the confidence demonstrated in the system, Husk has gone a Little Extra and has generated investments from social impact funds like Acumen Funds and Bamboo Finance. They also raised $20 million from Shell Technology in early 2018. Due to the investment, the company has invested in 50 more mini power plants up from two.

The company has made a massive impact on the places they are set up. They not only recruit people from local villages; they are also pumping a portion of the revenue into the system. The company is using the charred rice husk to make incense sticks by employing the local women. Due to the 24×7 power supply, the local villagers have been able to get into businesses that they have never done before.

It is a fact that people in these villages got mobile phones before electricity. As a result, the villagers would travel 20 kilometers to charge their phones. Today, they can charge their phones in their homes. Another villager was happy to see his children study inside their own homes under the lights.

A local entrepreneur in one of the Husk villages installed a UV water purifier using the power. He has been able to sell bottled water to other villagers, about 2,500 liters a day. Another customer has set up ten freezers and sells about 2,000 ice-creams during the summer to villagers who have never seen ice creams before.

As of today, husk’s distribution network is in India and Tanzania, and they plan to add more countries in the coming years. Rural electrification from rice husks is a result of the ingenuity and doggedness of four people who realized that the human itself is super. They used local resources to generate and distribute electricity innovatively.

Ernst Friedrich Schumacher arrived in England after escaping Naziism in Germany. He studied Economics, and during World War 2, he helped develop a policy to build a post-war Britain. Schumacher was a staunch opponent of nuclear energy due to the dangers of nuclear waste. However, he became noted due to his wisdom and pragmatism with influence from the life of Mahatma Gandhi, Leopold Kohr, Gauthama Buddha, Karl Marx, and others.

In 1965, he published an article in The Observer titled ‘How to help them help themselves,’ pointing out the limitations on the transfer of large-scale technologies to developing countries without resources to accommodate them. His concept of “economy of permanence” was primarily influenced by economist JC Kumarappa and Mahatma Gandhi. He thought their economic thinking was compatible with spirituality rather than materialism.

He introduced Buddhist Economics, which is based on the belief that individuals need good work for proper human development. He also said that production from local resources for local needs is the rational way of economic life. He traveled through many Asian countries and encouraged them to create self-reliant economies. He became an advisor to India’s Planning Commission and the government of Burma.

He went a Little Extra and created an advisory center to promote the use of efficient labor-intensive techniques. In 1966, the Intermediate Technology Development Group (ITDG), now called Practical Action, was born to focus on pragmatic, holistic, and systematic approaches to tackle poverty. It works with the local people to create appropriate technologies in renewable energy, food production, agro-processing, small enterprise development, and disaster risk reduction.

In his 1973 book ‘Small is Beautiful,’ Schumacher has said that large industries and large cities will lead to the depletion of resources. Though capitalism brings higher living standards, it deteriorates culture. With the concept that humans themselves are super, Practical Action equips people to change their situation using intermediate technologies with the combined power of innovation, knowledge, and collaboration.