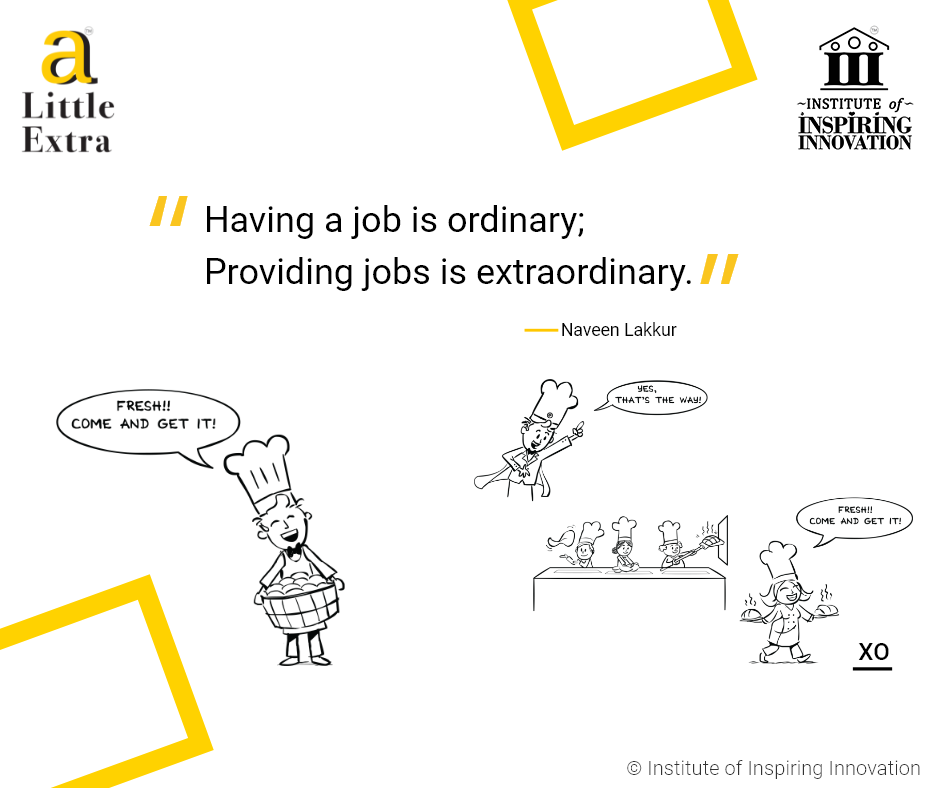 “Having a job is ordinary; Providing jobs is eXtraOrdinary.” – Naveen Lakkur

The economy runs when people are employed. Governments have motivated people to start ventures and create employment opportunities for others.

Progress has always been collective. Ideas may have been solitary, be it in the past or present, but execution and implementation and the success of an idea is a joint effort. And when this collective effort takes place, humankind evolves.

When a person comes up with the idea of providing jobs to people, they are essentially working for a cause. The cause of uplifting communities. As they say, service to humanity is service to god. Let us look at a few examples of job creation.

In the late 1950s, seven women from Gujarat were looking to earn a living through sustainable methods, using the only skill they had – cooking. They borrowed a sum of Rs. 80 from Chhaganlal Karamsi Parekh, a member of the Servants of India Society and a social worker. They took over a papad-making business that drowned in losses, bought the required ingredients, and set up the necessary infrastructure to manufacture papad.

On a March morning in 1959, the seven women gathered and began the production of papad. They started with four packets and sold it to a known merchant in a popular market in Mumbai.

When they started, they used to manufacture two different papad qualities, allowing them to sell the lower-quality papad at a cheaper rate. Chhanganlal Parekh then advised them to make standard papad and asked them to never compromise on quality. Parekh went on to become their guide. He later educated them on the need to set up a proper system and accounts, including the importance of running it as a business.

In the first year, their annual sales were at ₹6,000. The company began growing as they were known in and around town and carried on through word of mouth. It was only in 1962 that the name Lijjat came into being. The company was named Shri Mahila Griha Udyog Lijjat Papad. It roughly translates to a business run by women selling tasty homemade papad. By 1963, the annual sales reached a whopping ₹182,000.

The company recruited more and more women. Once a part of the company, they are to take up ownership of the business. This system allowed women to go a Little Extra, work diligently, and become problem solvers whenever a situation arose. The company believed in the philosophy of Sarvodaya (the economic and social development of a community as a whole). This system allows for all members to be decision-makers and owners of the company. The members were fondly referred to as behens.

In 1988, they entered the detergent market with Sasa soap and detergent. Now they are a company manufacturing products, from papads, masalas, wheat flour, chapatis, detergent powder, detergent cake, to liquid detergents.

The company is currently worth ₹800 crores and employs more than 43,000 women. The entrepreneurial spirit shown by the seven women back in 1950 is an extraordinary show of comradery, commitment to job creation, and upliftment of their community.

Murali Vullaganti is more than just a household name. He is a brain that grants employment opportunities to thousands of individuals across India.

It all began in 2000 when Vullaganti came to know about how the economic growth in cities surpassed those in villages by a whopping 75%. This was not good news because there was a surge in migration to the cities in search of jobs. People began moving away from their families in villages, destabilizing the joint family systems. Those who moved to the cities couldn’t save enough as the cost of living was high in cities.  Families were being split, and parents could no longer depend on their children to take care of them.

It was then that Vullaganti pondered what businesses could do to nullify the rural migration, and take jobs to their homes. This business model blew up into RuralShores, the pioneers in bringing jobs to the talents in rural India. Employing talent in the villages was not a challenge. The challenge was that they needed to be trained in English and communication skills. Some even had to be trained to use computers.

In the early years, they witnessed a lot of absenteeism, as the employees would be away for marriage or when it was the harvesting season. A manual was set up for induction training, which allowed employees to learn at a pace they chose.

RuralShores earned many recognitions, awards, and milestones. One of them being the recipient of ‘Edison Award Winner’ in the social impact category, for its innovative business model.

“PeopleShores’ purpose is to make a difference that matters, in underserved communities in the US, by building a world-class technology and technology-enabled services business. It is particularly focused on socially & economically challenged young adults and military veterans.”

Their philosophy is transformed competencies lead to transformed lives, which transforms the community.

As of today, RuralShores has 19 centers spanning across ten states, currently employing 2,000 individuals. PeopleShores plans to set up 12 new centers in the next five years.

Murali Vullaganti’s passion has helped employ and provide jobs to thousands of people in India and the USA with the rural BPO, which is commendable and a wonderful feeling of providing jobs to talented people.

Back in 2008, Travis Kalanick and Garrett Camp were attending the LeWeb. The conference is said to be a melting pot of revolutionaries, where they get together to plot the future. It is said that the idea of Uber was born when the two could not get cabs late in the evening after the conference.

Initially, the founder had to go from cab driver to cab driver to convince them and invite them to pitch meetings. It was the word of mouth that got them their very first set of drivers. Once they had convinced their first batch of drivers, they were ready to begin the business.

In this phase, they also faced a few bottlenecks. Customers complained about the quality of cabs, late arrival, drivers not accepting credit cards, and overall unhappy customer experience.

Uber went on to tackle all the issues by integrating all data into their apps. They facilitated online payment; the app showed ETA of the drivers, standards were set in place to ensure customers rated their experience based on the cabs’ cleanliness and driver’s behavior. Uber forayed into the food delivery business with UberEats which increased employment opportunities for people.

From an idea to employing around 3 million drivers across the globe, Uber has grown exponentially. The benevolent and innovative ethos stemming from both Kalanick and Camp has been able to generate large scale employment opportunities.

While we only see the drivers, Uber has a vast network of coders working on the back end, improving the app and elevating user experience. The team also includes business strategists and marketing personnel. Apart from drivers, Uber employs more than 27,000 individuals. Providing jobs on such a scale is an extraordinary feat.