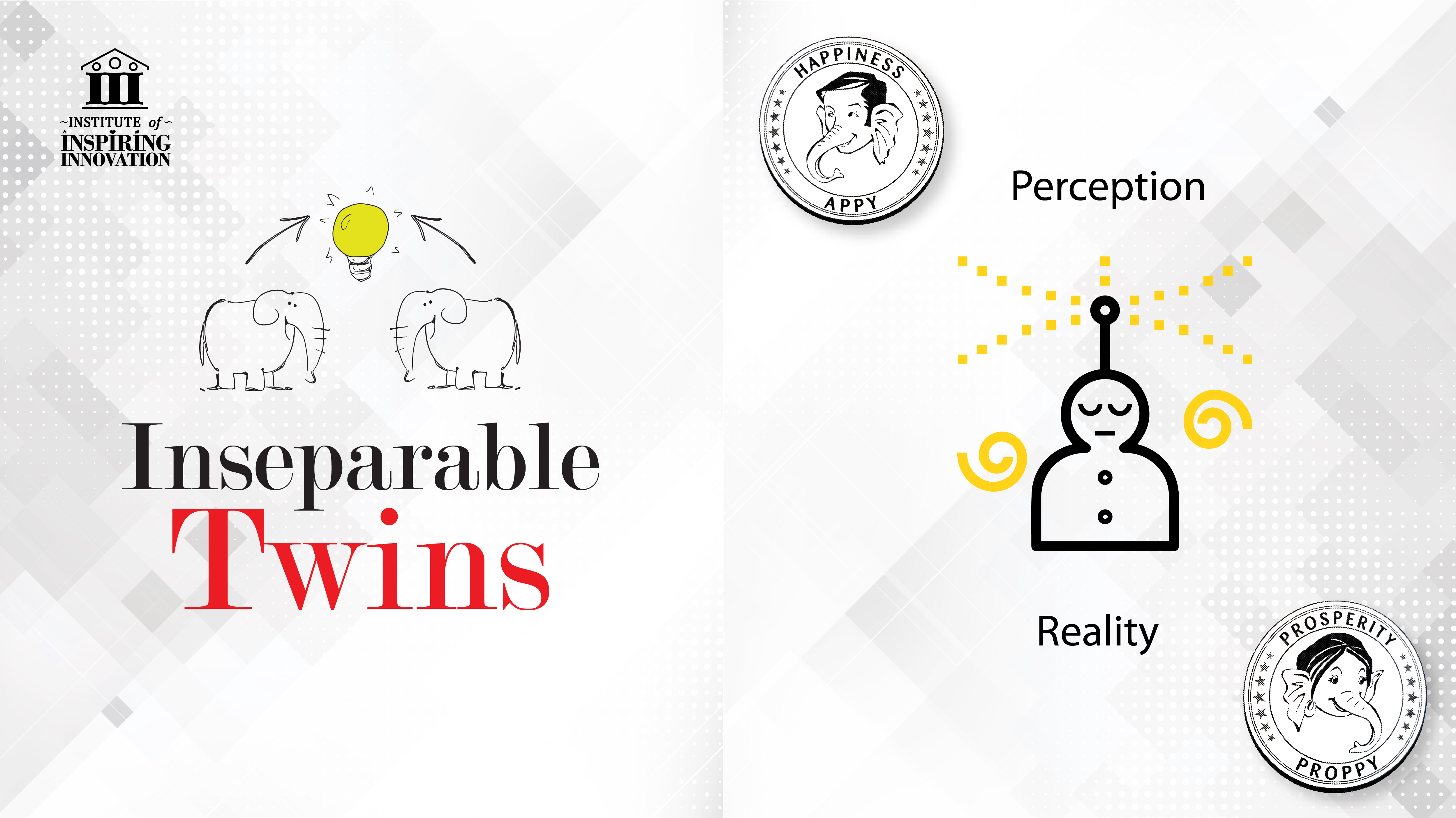 Appy, the male elephant with a name synonymous with happiness, and his twin sister Proppy, a name synonymous with prosperity, attended a seminar as suggested by Lucky, their human mentor. The speaker at the seminar was popular who also claimed to be an entrepreneur. In the beginning, people were excited to listen to him. However, the elephant twins came out of the hall uninspired midway. They decided that they will call Lucky to discuss their experience.

“He claims to be successful. But all he did was talk about how to become successful. He did not give any real-world examples. It looked like he picked them up from the self-help books,” said Appy thoughtfully.

“At least he was successful in pulling your attention to get you to attend his seminar. Isn’t it?” answered Proppy playfully.

Appy retorted with a snort. “I perceived him to be successful.”

“The reality is that he is actually successful at pulling in an audience,” replied Proppy.

Appy looked up the speaker on his phone and said, “I think his ideas will not work in the long-term. I found no actual proof of business experience. I just checked him on the internet and saw a few mixed reviews. People have written about how ignorant he is about the practical applications of business. The reality can sometimes be so different from perception. In fact, I just found out, his entrepreneurial stint has self-employment in nature.”

Proppy pointed at the ice cream shop nearby. While the twins walked towards the shop, Proppy said, “People are drawing conclusions about things that are opposite to facts. Perceptions about things give people hope. And I for one, am all for perception because it opens people for introspection and challenges.”

This was a trigger for another fruitful discussion between the duo. They sat down at a table and ordered ice creams.

Appy continued the discussion and said, “I read someplace that when surveyed about the perceptions of people’s personal situation, they were hopeful of it. However, when asked about the world, or state of their nation, the reality is that the same people’s opinions were negative. I don’t know where I read it, but I believe it is true.”

“I read something quite different,” said Proppy scooping out a spoonful of fruits. “People are usually biased to what they focus on. What you focus on can make you miserable or happy. However, from then on, it is a journey of discovery. When they really look into it, they will understand better. I think perception is the way towards discovery.”

Appy responded quickly and said, “I understand. Do you mean perception and reality are the same?”

Proppy disagreed and replied, “While I think about it, they are not the same. And I think they are two sides of the same coin, an inseparable twin of sorts.”

Appy said in excitement, “People say that universities run by the government and philanthropic organizations are not as good as those run by private players. I wonder if there is any truth in that assumption.”

Proppy popped a few cashew nuts into her mouth and said, “people are of the same opinion about hospitals. I see that these days, government hospitals and educational institutions have no takers as people doubt their credibility and utility.”

“Have you heard of the All India Institute of Medical Sciences?” asked Appy quickly switching gears.

“AIIMS. Yes, I have,” replied Proppy.

Appy continued, “It is a group of autonomous medical colleges of higher education run by the Government of India. They have an attached hospital where medical treatment is provided to anyone at nominal prices. It serves lots of people from a peon to the Prime Minister. Contrary to what is believed of government-run educational institutions, the doctors trained from AIIMS are in demand everywhere.”

Proppy thought of another example and said, “Have you heard of Tata Nano, the people’s car? In reality, it was truly innovative in terms of its pricing and its minimalist design. However, due to the perception that low pricing means low quality, the car literally sold only one unit in 2019. If people knew better, instead of going with the perception of a cheap car, the brand would have done so much better.”

Both Appy and Proppy finished their ice creams and called their mentor Lucky. They explained to him of the uninspiring seminar they attended and how they found out that perception and reality are very different in this case.”

Lucky joined Appy & Proppy and congratulated the elephant twins for attending their first seminar. He appreciated the duo for being able to distinguish the difference between learning from someone who has run successful companies versus listening to someone who has no business experience. Lucky said “however, there is scope to learn from every person, never miss an opportunity to learn”.

Proppy paid for their scrumptious ice creams and trudged outside the shop with Appy. Lucky continued, “In the context of innovation, innovators must uncover a problem before going to the drawing board to find a solution. Innovators perceive that every idea they conceive will be lapped up by the public.”

“Has anyone approached you with an innovation that no one needs?,” asked Proppy.

“Yes,” said Lucky. “People regularly come to me with outlandish ideas with hopes that I will fund their ventures without even having a product ready for market. However, I say to them that any innovation must provide value to customers while addressing a problem. Or else they will be discarded quickly.”

“I hope that is not what happened to Tata Nano,” wondered Appy.

Lucky answered, “No. I think it was a great innovation and it was exactly what the large Indian middle-class needed. I have friends who still use the car years after purchase. However, I believe that Tata Motors’ marketing efforts towards projecting it as the world’s cheapest car, backfired. The only thing they talked about was its price point. The reality is that the car was fantastic, useful, and compact.”

Appy agreed and said, “We too discussed how innovative Tata Nano was. We agree that marketing helps create a perception among people. Not marketing your product will prevent people from discovering a product’s real utility value or lack thereof.”

“You have hit the nail on the head, Appy,” said Lucky happily.

Appy probed further and said, “If marketing shapes perception, how will you market the reality of any product?”

Lucky answered patiently, “Perception occurs in the mind and can turn any belief into reality. Reality occurs outside of the mind and it cannot be manipulated easily. However, a perception has an influence on how we perceive reality. Marketers know this, but they manipulate mindsets so that people perceive the wrong reality. But we have the tools to measure reality. We must challenge perceptions and seek validation from experts and credible sources to understand reality.”

Proppy thoughtfully replied, “When I hear someone say that perception is reality, I always remind them that it may be your perception, but it need not be the reality. The same goes for entrepreneurs, innovators, businessmen, and corporate executives who tend to think that what they perceive is the reality of the world. In many cases, I have seen that it is not so.”

“If perception and reality are aligned, things work. Or else they get challenged,” said Appy with a sense of finality.

Lucky concurred with Appy’s conclusion and said, “I am happy that we discussed this interesting topic. Good going you two. I would also like to add that people quote the story of the light bulb as the greatest invention in history. However, in reality, the light bulb is nothing without electricity. We can conclude that the design of the electrical grid was the one world-changing innovation that lit everyone’s homes. Similarly, the wheel is no good without the engine that it is connected to. Without the engine, we could not have gone places.”

Appy with much curiosity asked, “Is there an example that brings perception & reality successfully together”. Lucky responded, “one example could the electric cars from Tesla, where Elon Musk & his team have managed to set the right perception & living upto the reality OR the reality rightly perceived”. Proppy remarked “indeed truly perception & reality as inseparable twins – complementing and supporting each other for success.

The elephant siblings realized that it was time for them to head back to the lumber yard. They thanked Lucky for this eye-opening debate on perceptions and realities and for his generous invitation to the seminar. They agreed that it led them to learn how anybody’s perception should be challenged for reality to emerge. After all, perception is a lens to look at the reality and the need to develop the art of creating right perceptions based on reality.