Others having no option other than you is eXtraOrdinary

Home Articles a Little Extra Others having no option other than you is eXtraOrdinary
Naveen Lakkur / a Little Extra, Quotes / 0 Comments 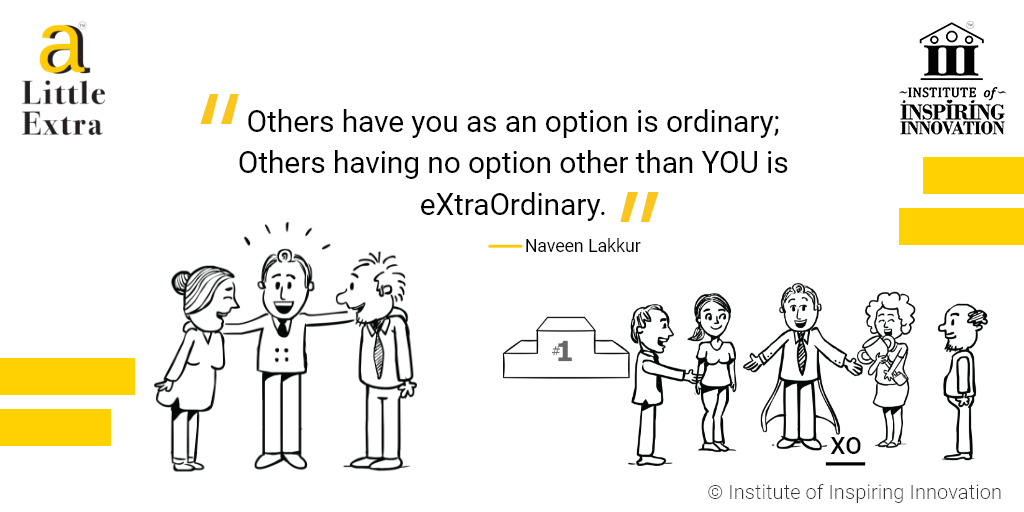 “Others have you as an option is ordinary; Others having no option other than you is extraordinary.” – Naveen Lakkur

People work hard so that they can provide for their families. However, many people with the same or similar skillsets can do the same job giving recruiters a choice from the talent pool. On the other hand, some people go a Little Extra to acquire some extra skillset to get more efficient than most people. They use this additional skill set to contribute for the larger good and make themselves the best or the only option. Let us look at some brilliant minds who have left a mark.

Story 1 – The Wise Man From Rameshwaram

The stories about the life and work of Avul Pakir Jainulabdeen Abdul Kalam will fill volumes. He was born in 1931 to a family of fishing folk in Rameswaram. In his childhood, he had a strong desire to learn and spent hours with his Mathematics books. He finished Aerospace Engineering in 1955.

He wanted to get into the Indian Air Force and fly fighter aircraft, but he fell short of breaking into the top eight slots by one. Thus, his journey as the Missile Man of India began. In 1960, he joined the Defence Research and Development Organisation (DRDO) as a scientist and designed a utility helicopter for the Indian army. Next, he worked under Dr. Vikram Sarabhai, the pioneer of Indian space research.

In 1969, he was transferred to the Indian Space Research Organisation (ISRO). He was the project director of India’s first indigenous Satellite Launch Vehicle PSLV III that deployed the Rohini satellite to low earth orbit in July 1980. He was also part of the project to develop ballistic missiles. The usage and tweaking of the successful SLV program for missile technology was an innovation.

He played an intensive political and technological role in the Pokhran-II nuclear tests as the chief project coordinator. The government chose him to head the secret project based on the scientific prowess he displayed in the success of the previous projects. After the project became a success, Dr. Kalam became a household name when the media put him in the limelight.

As one of the Chief Advisers to the Govt. of India, he began touring science and technological institutes to impart his learning to interested students. Whichever institutes he went, students eager to get a glimpse of him, ask questions, and learn from him filled the halls. In his book India 2020, Kalam advocated an action plan to make India a knowledge superpower and make India a developed nation by 2020.

He took an active interest in developing science and technology, biomedical research, open-source technology, agriculture, and food processing technology, among others in the country. He is also known for writing poetry and his practice of a stringed musical instrument called Veena in his free time.

In mid-2002, the government batted for Dr. Kalam to be appointed as the President of India. As a matter of fact, Dr. Kalam did not know about his name floating around in the political circles. Both the ruling and the opposition embraced the idea of making him the President. He was so popular in both the scientific and political circles that he was the only logical choice for the coveted post. In July 2002, he was chosen to serve as India’s 11th President until July 2007 and was affectionately called the People’s President.

Though he is no more physically today, his books are an embodiment of his personality, teachings, knowledge, and experience. Throughout his illustrious career, he made sure to research and learn about critical issues, teach and empower others so much that he was an automatic choice to head many government projects.

Did you know? Switzerland declared May 26 as the Science Day in Dr. Kalam’s honor in memory of his state visit as the President.

Story 2 – A Tutor of Choice to the Underprivileged

Anand Kumar was born in Patna in Bihar’s capital, where most poor children struggle to get a good education, let alone get admission to elite educational institutions. Though he was brilliant as a student, he could not go to an elite university due to financial constraints. Early in his life, he developed an interest in mathematics and submitted his papers on number theory and published in major mathematical journals.

During the day, he worked on mathematics and sold papads that his mother made in the evening to support his family. He would travel to Banaras Hindu University (BHU) on Friday evenings, to spend the weekends at the library to access foreign journals, and come back to Patna on Monday mornings.

He started teaching at Ramanujan School of Mathematics that he began in 1992 by renting a classroom. In two years, the strength of the class grew from two students to 500. The idea of ‘Super 30’ struck him when a poor but brilliant student approached him to learn from him but could not afford to pay the fee.

Moved by this incident, he created Super 30 to train a group of 30 brilliant but economically backward students that he chose to further train based on the performance in a test he conducted. He would tutor, provide study materials, and take care of their lodging for a year for free. Though Super 30 was a financial burden on him, it was an innovative move to host and teach brilliant students.

The icing on the cake is that most of the students made it to the IITs. He shot to fame when Discovery Channel released an hour-long documentary about the Super 30 program. After the documentary, awards and recognitions soon followed. It also garnered his fair share of controversies too, but still economically backward students still queue up outside his coaching institute to get into the Super 30. Even the financially and socially privileged students wanted to tutor under him as they saw him as the only choice for them to get into the elite institutions.

Did you know? Hindi movie Super 30 with Hrithik Roshan in the lead portrayed the life of Anand Kumar. Released in July 2019, it became one of the highest-grossing Hindi movies of 2019.

Sam Walton was born in a farming family. The Great Depression was hard on the family, but they faced it boldly. Sam attended the University of Missouri with the money he earned working as a lifeguard, waiter, and a newspaper delivery driver. After receiving his Economics degree, he worked at JC Penny for 18 months before being drafted into the army during WW2.

After the war, he took up a Ben Franklin store franchise and opened the first store in Newport. Despite the small population, he managed a total of 15 stores making his Ben Franklin franchise stores the only option for the townsfolk to shop from.

In 1962, he opened the first Walmart store in Rogers, Arkansas. During the 1970s, the number of stores increased eightfold, and sales had risen from $313 million to $1.2 billion. By 1991, Walmart beat retailers like Sears, Kmart, and Roebuck & Company to become the USA’s largest retailer.

Much of its success came from its operational innovation. Sam Walton made sure that its distribution center was located within a day’s drive to all of the stores. The supply chain was so efficient that a product sourced by Walmart was sold within three days. Some customers made Walmart as their only shopping destination due to the speed at which Walmart operated.

They also embraced technology. In the early 1980s, Walmart adopted UPC barcodes to automate the inventory process. Walmart also had no problem going digital too. Today, it is the fifth-largest online retailer in the world. Today, its stores use robots to do tasks like washing floors, check stock, scan for pricing errors, etc.

They also invested in satellite technology. Today, Walmart has the largest privately-owned satellite network in the world. The office in Arkansas tracks delivery trucks, relays communications, transmits sales data, and is also used for personnel management, transaction processing, inventory control, and training. Another place they invested was on upskilling their people.

For brands, stocking in Walmart has become a matter of pride. 90% of Americans live within 10 miles of a Walmart or a Walmart owned establishment. Walmart is the largest retailer in the world and has a market cap of over $400 billion. With an efficient supply chain, a fair amount of products, a good number of stores located equidistantly, most shoppers do not need a choice. Walmart is the defacto option for most.

Did you know? One of the largest employers in the world, Walmart employs 2.2 million associates around the world.