Making an idea worthwhile is eXtraOrdinary 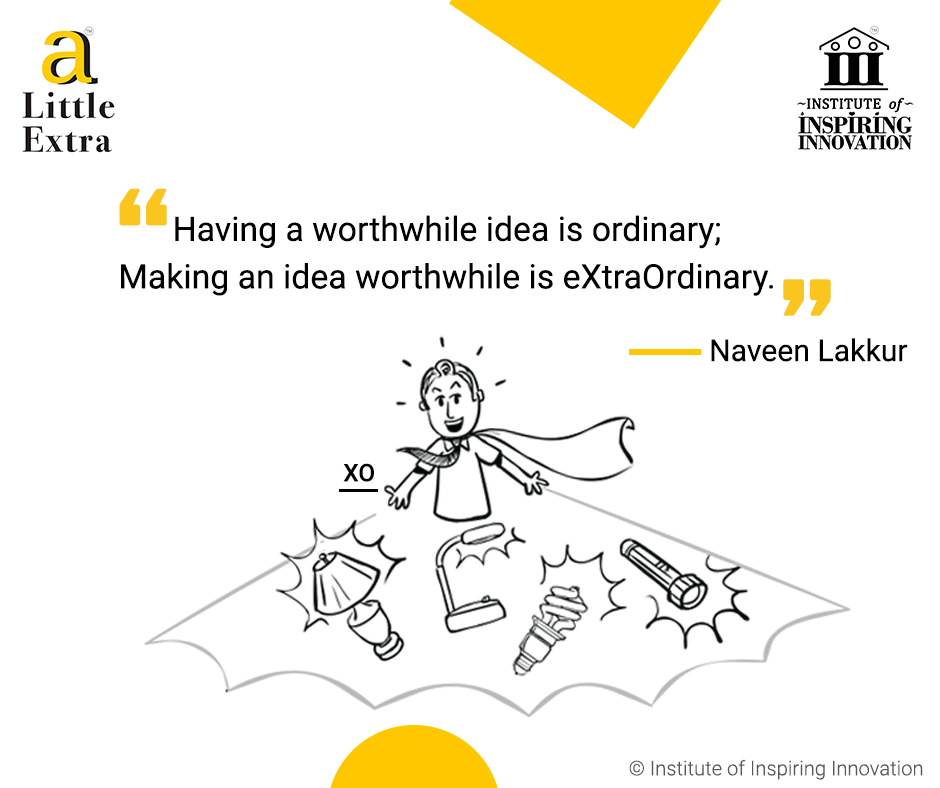 People come up with ideas to solve their problems or the ones of others. Some ideas do not work as intended but some do. Every ideator wishes that their idea/s be the best. They would fantasize over it and they think it could make money or add value to people’s life or both. They talk about it like they are leaving million dollars under the table by ignoring it. While they say “ideas are dime a dozen,” some people take their idea, work a Little Extra on their idea and make something worthwhile out of it, making it worth millions.

While having ideas itself is a special event, ideators must think if they will build value with it, if it can be adopted and be useful to people. That is when ideas become worthwhile. Entrepreneurs are a special category of ideators who understand that having a worthwhile idea is a necessity, they go the extra mile to make it a reality, making it useful and impactful.

For example, Shark Tank is a reality television series where entrepreneurs pitch their ideas and even show a working prototype or a product to a panel of investors, the “sharks”. After listening to the idea pitch, the investors decide if they want to invest in the idea or not. While every entrepreneur believes their ideas are worthwhile, The sharks are not only looking for people who can present their worthwhile idea in a short pitch, but they are also looking for the ability to execute the idea and create an impact on the market, in fact, that’s a Little Extra they want.

Prior to 2012, Ajith Mohan Karimpana was working in the US for Goldman Sachs as a Senior Analyst and later as Vice President. While working there, he learned the changing trends and the young population moving to urban land and also learned about people’s pain-point associated with shifting. In 2012, Ajith decided that wanted to get into the furniture business as he saw an opportunity and figured out that people were looking for furniture that was affordable and beautiful to look at.

Ajith identified a need and a change in the market in a country like India, which is a growth market. With the increase in the purchasing power of Indians, the way they lived life changed. And for Ajith, this was a good time to plunge into the business. Now as an entrepreneur he started a company in India as ‘RentUrDuniya’, with a ‘furniture-on-rental’ model.

He used his own savings to grow the business while trying to create a new market category for online furniture rental. He went a Little Extra and convinced people to rent furniture instead of purchasing them. While business was going well, he knew he had to pitch to investors to scale up. His efforts to catch the interest of investors turned futile because the investors thought the business model was asset-heavy.

He thought his idea was worthwhile. When his funds dried up, he turned to friends and family. Ajith took a risk, borrowed one crore rupees from a friend, and poured it into the operations. His business was renamed to Furlenco, a brand under Kieraya Furnishing Solutions Pvt. Ltd. With the newly acquired funds, he put a little extra effort into his business. The company improved the business model and concentrated efforts on marketing.

a Little Extra element is that creativity and innovation are part of the company. They ordered custom-designed furniture that was colorful, attractive, and created using good quality wood. Their presentation was unique. The innovative service offerings attracted people living in many of the 1BHK, 2BHK, and studio apartments in Bangalore. Their sales doubled month-on-month since 2014.

Furlenco’s sales caught the attention of investors and It raised money from angel funding and later in October 2016 the company raised $30 million. In 2016, Airbnb collaborated with Furlenco to offer home interiors to the homes of Airbnb hosts. The company has evolved over the years and has become a monthly rental subscription model for entire homes. With success comes charity.

With business growing, they had to make space for new furniture or else get stuck with old furniture. As their little extra, they give away old furniture to charity. However, by then they would have recovered the cost through sales. Today, India is the 8th biggest organized furniture market and the success story of Furlenco is likely to bring in more players domestically and internationally. The opening of the operation of Ikea’s Hyderabad store is an example. Watch how Ajith made his idea worthwhile by building Furlenco changing furniture subscription business in India.

Story 2 – Creating a Key to Safety

The COVID-19 pandemic has thrown many challenges especially to the private and government institutions which cannot halt functioning even during the lockdown times. It forced people to make changes in their lifestyle, the way they behaved in public. However, COVID19 has become a catalyst for innovation. Ideators have started to come up with solutions to basic problems people are struggling with.

One such ideator is Muthu Vellayappan a Ph.D. student from Monash University, Australia. While watching videos on the internet of some people touching elevator buttons after sneezing and coughing, it caught his attention. The thought to solve the problem of contamination gave him an idea, which he thought was worthwhile. That is to come up with a tool to help people go about their daily activity without coming in contact with hard surfaces that may hold thousands of viruses.

He went through the entire process of idea validation and with the help of Autocad, he designed a tool that can be used to open doors and push-buttons. He went on to be a little extra and created a prototype using 3D printing technology. The tool was made of plastic and named it ‘The Safety Key’.

The ‘Safety Key, a welcome innovation’ was developed to help people avoid direct contact with door handles, ATM digits, hand dryers, toilet flushes, lift buttons, and other surfaces that are likely to be contaminated, and consciously slow the spread of viruses. The key can fit a number of L-shaped and U-shaped door handles commonly found at hospitals, shopping centers, and universities. The tool can be gripped properly and is very handy. It can also be washed with soap water.

This tool, while handy and innovative, is designed like a key that is easy to handle, not heavy, and the surface is resistant to infection. It could save many lives by keeping people away from surfaces with contaminated droplets. He is going a Little Extra and giving it away for free in the hospitals. As the need is large during the crucial times, anyone interested to get their hands on the tool can contact him and get the file that the 3D printer prints. Watch the video.

Here is an opportunity for investors or a little extra opportunity for the MSME entrepreneurs who have the infrastructure to mass produce and make it available to the market which requires preventive solutions against COVID19 spread. A worthwhile idea waiting to be encashed.