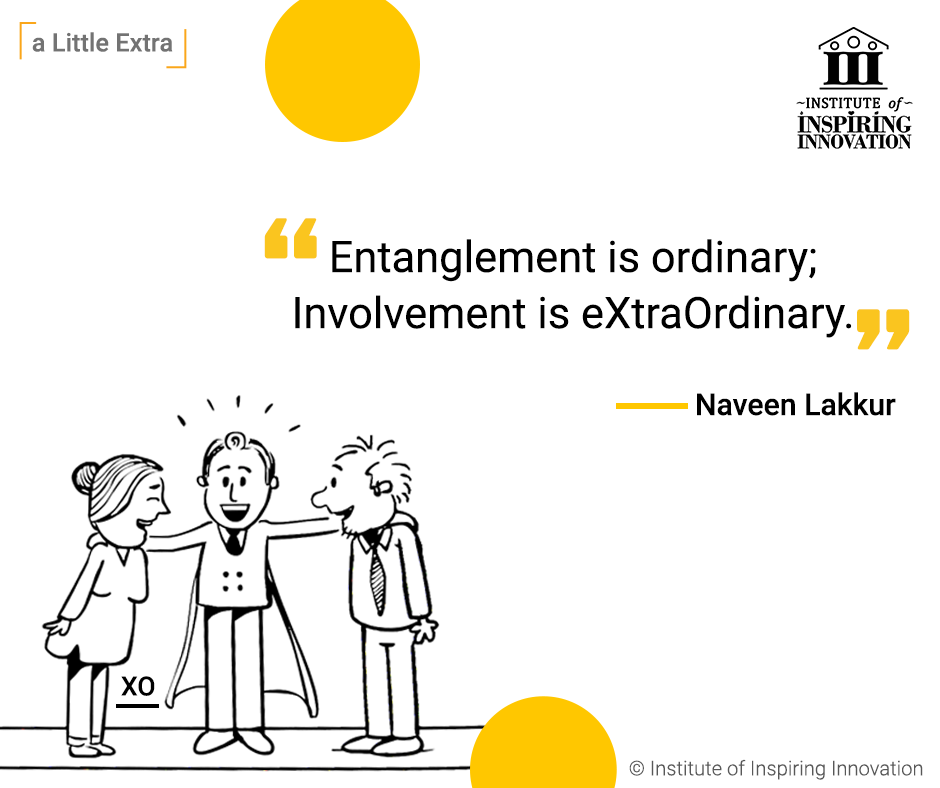 When ordinary people encounter a difficult situation, they feel entangled and unable to get out of the situation. However, when they put in a Little Extra effort than others and build a platform, it launches them and others not only from their current entanglement but also into the stratosphere and makes them eXtraOrdinary.

Masayoshi Son was the son of a Korean migrant in Japan. He was bullied in school because he was the son of Korean descent. He got involved in many businesses to get by in life. However, he did not see success as others did. He figured he had to do a Little Extra to get out of the rat race. At the age of 16, he moved from Japan to the USA to learn English and to finish high school as he figured out that this could make him successful.

One day he realized his dream of meeting his business idol Den Fujita, the founder of McDonald’s Japan. He wanted to learn from him about success in the fifteen minutes of time he was given. During the conversation, he asked his idol what business he must be involved in to become successful. Mr. Fujita told him to get into computers as it is the business of the future.

Thus stated Son’s journey in technology. While in college, he used his Physics professor Forrest Mozer’s speech synthesizer as a translator that would pronounce the word that people were trying to translate. It could be sold at airports. Mozer and Son patented the device and after selling it to Sharp, they earned a million dollars.

He returned to Japan and founded SoftBank with his money. He was distributing software initially but also moved from software distribution to publishing. His company published technology magazines and had a circulation of 140,000 copies in 1989. Later that year, Masayoshi Son went a Little Extra and invested for the first time. His first involvement was with Yahoo. Soon, they invested big money into many technology companies and got involved in their success.

In the mid-90s, the dot-com bubble took out 99% of SoftBank’s value and plummeted Son’s net worth significantly. Undeterred, the eXtraOrdinary entrepreneur that Son is, he rebuilt the company with an investment in Alibaba, an unknown Chinese startup at the time. Both Alibaba and SoftBank grew and became a force to be reckoned with.

Today, SoftBank and Masayoshi Son are influential investors in the Indian startup ecosystem. In the last few years, he has been involved in new-age technology companies namely Oyo Rooms and PayTM, and has a hand in their success.

Masayoshi Son is a classic example of someone who refuses to be entangled by their struggles and worries and instead builds a platform that gets them and others out of the entanglement and gets successfully involved.

Vijay Shekar Sharma has a similar story to Masayoshi Son. Vijay came from a small village near Aligarh. His father was a school teacher and he grew up in poverty. Since the medium of instruction throughout his schooling was in Hindi, he could not speak English, which others would see as an entanglement. Since his early days in college, he had a love for entrepreneurship and wanted to emulate the success of Yahoo with his own internet venture.

In order to succeed in the internet business, he realized he had to learn the English language. He borrowed books and magazines from his friends. He would also read Hindi books and then read the English version so that he could learn all the words and sentences. However, it was proving to be difficult. He wanted to go to Harvard to study like most of his friends, but could not because of his bad English.

Instead, he joined the Delhi College of Engineering. In college, he built a content management system with his friends that was sold for a cool million. Later, he started One97 communication and offered news, cricket scores, and exam results. He was forced to spend his own money on his venture due to a lack of funding. However, he had a keen interest in technological innovations and wanted to be part of the change.

He had lost an opportunity to build a search engine when Google grew and left everyone behind. Not someone to lose heart, he built PayTM, an app with which people could send money to other’s phone numbers. He had only a handful of users and was not enough to attract huge investors. When the Indian government demonetized 500 and 1000 rupee notes in 2016, the whole country had difficulty in finding cash in ATMs. Some said this could put the country years behind as most of the transaction in India was done by cash, and the citizens would feel entangled.

With PayTM, Vijay built a platform that put him and the users out of the entanglement. When most people saw the situation as an entanglement, Vijay Shekar Sharma went a Little Extra, saw the situation as an opportunity and saw it as the right time to get involved to help many Indians become financially inclusive. PayTM’s success attracted the attention of Masayoshi Son, one of Vijay’s inspiration. SoftBank’s investment into PayTM drove the company’s valuation to $10B.

Vijay could not go to Harvard, however, PayTM’s journey from being a recharge platform to becoming a payments bank is a case study at Harvard.