Innovation based on Human Values is extraordinary 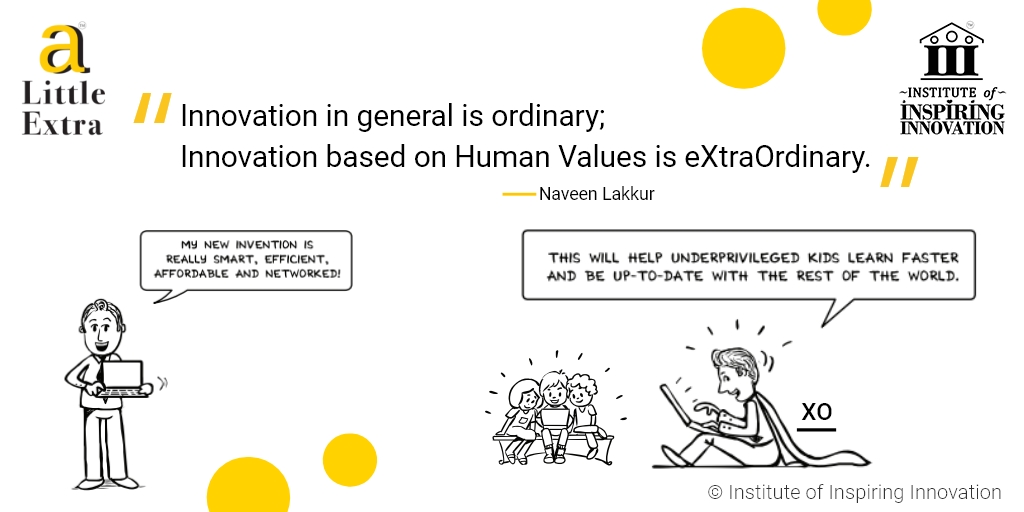 “Innovation in general is ordinary; Innovation based on Human Values is eXtraOrdinary.” – Naveen Lakkur

If it weren’t for innovators and their innovations, we would still be eating raw greens and meat, using our hands for everything. The world changed with each innovation in the wheel, bread, the printing press, and information technologies. These innovations propelled humanity into a better future.

Necessity, as they say, is the mother of invention (innovation). It could arise from within oneself or the need to serve a large community. When innovations are based on uplifting and propagating welfare within communities, it is indeed a commendable feat.

It is imperative as a part of a society to give something back, but in the case of innovators who create based on human values – they build societies around their goal, ensuring better living standards. Let us look at a few such stories of extraordinary innovations and innovators.

Story 1 – The Robinhood of Healthcare

In the 1920s, Khwaja Abdul Ali and Masood Jahan Begum persuaded their son to move to the United Kingdom from Bombay to study law and become a barrister. Back then, being a barrister was the career in demand with most privileged families in the country. Their son, Khwaja Abdul Hamied, wanted to pursue Chemistry instead.

He traveled to Germany, a world leader in the sciences at that time, to pursue his passion and dreams. He soon acquired a degree in Chemistry and got married to a Lithuanian Jewish Socialist. He fled Germany as Hitler rose to power, fearing capture and execution.

Along the way, CIPLA came up with a drug called hydroxychloroquine (HCQ) for the treatment of malaria, lupus, and rheumatoid arthritis, a breakthrough innovation at that time. The name HCQ is back in circulation today, given all the talks of the drug being used to treat COVID-19 positive individuals.

When he handed the company over to his son, Khwaja told Yusuf – “Unlike other pharmaceutical companies around the world, we are not here to make profits but to bring relief and healthcare to the poor who may otherwise have to die for want of quality drugs.”

Being one of India’s first pharmaceutical companies, he could have easily tuned CIPLA into a money-making machine. Instead, Khwaja Abdul Hamied and his team used their vast knowledge in chemistry to research and dive into human-value innovation, making treatments and generic drugs accessible to the underprivileged.

Nestled in a Bengaluru suburb is a garage with a car, a couple of rickshaws, a workbench scattered with tools, and around 37 engineers focused on ensuring a better tomorrow. This garage hosts the Altigreen Propulsion Labs consisting of a team of experts in finance, engineering, aerospace, and software.

Altigreen develops special motor components at their facility, or rather powertrains as they are commonly called, that can be retrofitted to existing cars. These motors are designed to settle into the vehicles that run on fossil fuel and convert them into electrified hybrid cars.

An electrified hybrid car runs on both a conventional internal combustion engine where the combustion of fossil fuels powers cars and an electric propulsion system that runs on a battery. Unlike fully electric cars, these do not need to be plugged in but they can run on batteries. Users can expect to pay between ₹60,000 and ₹90,000 for a standard fitment, with the cost going up to around ₹1.2 lakh for the more advanced powertrains.

In 2011, Amitabh Saran took it upon himself to solve air pollution-related health problems. The number of Indian cities in the ‘most polluted cities’ list kept increasing, and Saran knew it was time he did something. He immediately understood that the electric powertrain approach was the way to go.

Saran was previously associated with NASA, HP, and the likes then discussed the idea with Dr. Lasse Moklegaard, a Ph.D. in control engineering and an expert in hybrid systems, and Dr. John Bangura, a Ph.D. in electrical engineering. They decided that they had to innovate and find a solution based on human values.

The idea was to reduce fossil fuel consumption in India, improve air quality, and reduce fatal diseases. The hybrid cars were not fit for the Indian roads, with the potholes and constant traffic. They were also unaffordable for the Indian middle class. They needed to make an engine for existing cars without disturbing other systems within the car.

Altigreen’s powertrain is a revolutionary innovation, bold and intelligent, a green initiative that helps Indians transform into an eco-friendly solution cost-effectively.

In 2011, the UN declared internet access a fundamental human right, a resounding power move. The internet allowed people to access information that would empower citizens. Even though it’s been almost a decade since the UN declaration, millions live with zero or limited access to the internet. The reasons vary from lack of infrastructure to lack of good governance.

Kendall Ananyi, however, did not sit on the sidelines and watch people struggle with limited access to the world wide web. With expertise in computer sciences and electronics, he sowed the idea that gave birth to Tizeti in 2012. The company formally came into existence in 2014. Tizeti is an internet service provider operating in Nigeria to provide a sustainable solution to low internet connectivity problems in Nigeria and Africa.

Tizeti uses solar power to operate towers and deliver high-speed internet. Since the towers run on solar modules instead of generators, it cut costs enabling them to provide unlimited wifi, allowing Tizeti to price its services 30-50% lesser than the traditional data connections. Currently, they have installed over 7,000 public wifi hotspots within Nigeria, serving over 150,000 customers.

The idea of utilizing the sun to provide internet access is an innovative solution based on human values of seeking constant connectedness. Tizeti made it possible for a large population to access a human right – the right to internet access.