Home Articles a Little Extra Holding yourself accountable for being the architect of your own life is eXtraOrdinary
Naveen Lakkur / a Little Extra, Quotes / 0 Comments 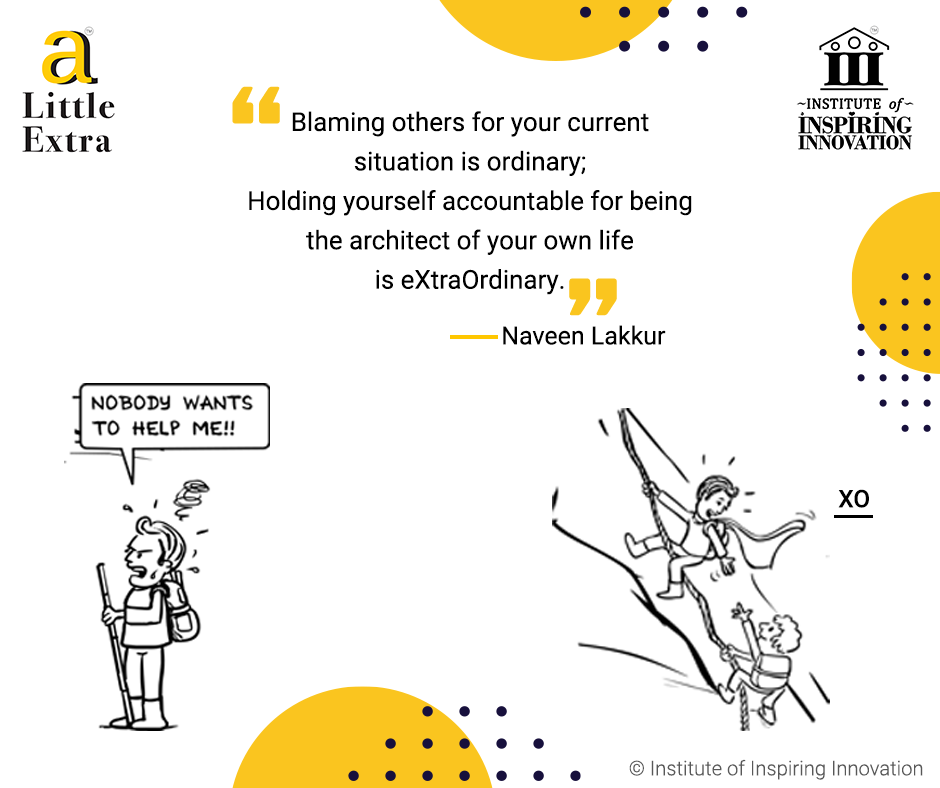 “Blaming others for your current situation is ordinary; Holding yourself accountable for being the architect of your own life is eXtraOrdinary.” – Naveen Lakkur

Nobody is immune to unforeseen circumstances that will derail our life, our plans, or our state of mind. It happens when people do not conform with our plans, or if the rules or the law of the land does not allow us to make good on them. As a defence mechanism, we all blame others for our current situation and may refuse to take responsibility for faltering with our plans. However, some people refuse to stand down despite being beaten down by circumstances.

They instead hold themselves accountable for the failure of their personal and professional plans. Some of them make plans to come out of a situation and go a Little Extra by holding themselves accountable for the situation and become the architect of their own lives to come out of a tough situation. They not only improve their lives and others but in the process, they create an impact on society. Here are some examples.

Prior to 1991, the License Raj made it hard to do business of any kind in India. The government focused on the development of the primary sector after India’s independence. After 1956, they emphasized government-led industrialization which was the start of the License Raj.

Licenses were required to start, conduct business, and expand businesses. While licenses were available in plenty, though for a price, commodity was scarce. Companies competed by buying licenses before their competition did. Since doing business was extremely difficult, and consumers had only a few choices to purchase, people were frustrated all the time. ‘This is the way it is’, people would say all the time. Blaming others, the competition, and the government was the way of life.

One person that seemingly took advantage of the License Raj was Dhirubhai Ambani. While some observers say that they one-upped their competition by buying up licenses, Reliance Industries would not have improved cash flow and finances, raise money, use technology, manufacture, and market world-class products, and get millions of people to trust the company and become shareholders without the street smartness of Mr. Ambani.

Instead of blaming others and sidelining himself, Ambani refused to lose. He built relationships with other companies and government officials, which was hard to do at the time. Surprisingly, Reliance produced world-class products loved by Indians. In the end, he became an architect of his life and the company. Reliance is still growing post the economic liberalization of 1991 despite competing companies as good as them. We have mentioned Jio here is a product of a vision.

Two more people that come to mind are NR Narayan Murthy and Azim Premji. Azim Premji’s journey started with the death of his father who had a vegetable oil business. Azim took up the reigns of the company and diversified its business with the start of its software service company. At that time, many companies including IBM sold archaic computers in India which irked the government and technology-savvy Indians. Dumping old products in India was not unusual at that time.

On the other hand, Infosys was founded by Narayan Murthy along with seven others in 1981. This was during the peak of the License Raj when private entrepreneurship was shunned upon, or discouraged due to bureaucracy. Coming from middle-class families, they took up the challenge of creating a successful enterprise. They hired talent to create software.

It was difficult to import even a single computer to start operations and bringing work was proving to be difficult. Instead of blaming the government, they found innovative ways to operate. Some of the founders went a Little Extra to work out of the US and approach clients to sell their IT services. Each of them looked after a particular aspect of the business which helped Infosys grow post 1991 marking the liberalization era.

These companies including many others have demonstrated extraordinary results. They chose not to blame others for their situation, and instead they went on to be a Little Extra and held themselves accountable for being the architect of their own life. That proved to be the pivoting point of their extraordinary success.

Kiran Mazumdar-Shaw is the architect of the biotechnology story in India and is one of the richest women in the world. As a trained brewmaster, she had a tough time when she was starting a business because people thought that brewing was a man’s job. She also had to operate through tough times as an entrepreneur. A graduate of Fermentation Science, she started off as a brewer in Australia.

Her work with a Scottish entrepreneur Leslie Auchincloss led her to set up the Indian subsidiary of Biocon Biologicals Limited. They rented a house in Bangalore to operate from. As an entrepreneur, there were challenges due to her youth, gender, and the business model. Besides these problems, no one wanted to work for a startup. She faced problems like lack of infrastructure, employees without scientific skills, unhygienic labs, and good old bureaucracy, etc.

Yet she persisted with limited resources and started with enzymes. Biocon India became the first Indian company to manufacture enzymes and export it to the US. With their earnings, they bought a 20-acre plot with future expansion in mind. The development and sale of enzymes gave Biocon the cash flow to fund the research and production of pharmaceutical drugs.

Later, Biocon India bought out Biocon Biologicals Limited, started research and manufacture of generic drugs. They soon had a well-balanced portfolio of products and research focused on Oncology, Diabetes, and Autoimmune diseases. She also had her heart in social entrepreneurship. She set up small clinics to provide basic healthcare in rural areas and ran a micro health insurance program, mostly funded by her.

Instead of blaming the lack of funds and her circumstances for her failure to get Biocon off the ground, she laid out a plan to make her venture a success and become an architect of her own life and a role model for affordable innovation.

Not to be done with business, but to be a little extra she also gave her time to corporate social responsibility that included infrastructure, health, and governance because she wanted to make a difference in these fields and has funded those causes. Watch her story.

Story 3 – From Debt to Celebrityhood

Indian-born serial entrepreneur and online marketer Neil Patel shows people how to make a living online these days. His success did not come in a day. As a first-generation Indian in the USA, the family struggled a bit. However, his family lived a comfortable life due to the success of some of the multiple businesses, his mother’s side of the family operated.

The entrepreneurial streak rubbed off on him early. He started earning a livelihood early in life. Like his cousin, he burned music into DCs and sold them, switching to ordering X-boxes and selling them in his school. After he grew up, he tried life as a salesman but wanted to move to something big. In his adulthood, he started Advice Monkey, a job board and career advice portal with his own funds.

He tried to hire several marketing firms to grow the business. However, it did not work for him because two of those firms did not give results, and then the third one cheated him out of his money. This led him into more than a million dollars in debt while he was 21. He instead tried to learn digital marketing on his own. He started an internet marketing company which took off. With the money he earned, he invested in web hosting companies but lost money fast.

Not to be undone with the failure, he launched Crazy Egg along with a partner. It was a tool that showed heat maps, the places where people click the most on websites. He worked with Fortune 1000 companies. He used the funds he earned through his internet marketing company to run Crazy Egg. Meanwhile, he launched software services but that failed to take off. After some time, Crazy Egg was turning a profit at that time because it was solving unique problems that businesses were experiencing regarding their internet marketing.

However, Neil Patel thought that Crazy Egg needed some venture funding, but he came up empty because investors turned him down. While they were growing their internet marketing company, they found that though there were many analytics platforms, it did not give comprehensive data. They launched an analytics company called KISSmetrics which became instantly popular.

Not only did they sustain themselves, but they also got venture funding from the same firms that initially turned down funding for Crazy Egg. They also received angel funding from Silicon Valley. Today, Neil writes on neilpatel.com and quicksprout.com to give his two cents about digital marketing, his experience, and experiments as an entrepreneur. The website clocks more than 3 million visitors a month.

His story also teaches us how financial debt along with business failure is a small step towards greater success. He is today on the New York Times bestseller list with his book Hustle and an angel investor, with investments ranging from dot-com companies to real estate.

While he initially blamed his partners for losing money and possibly his future plans to be an entrepreneur, he decided to be a Little Extra and build useful platforms for businesses to succeed online, becoming a celebrity in the world of digital marketing. He held himself accountable for the situations, became the architect of his own life, and made it extraordinary.