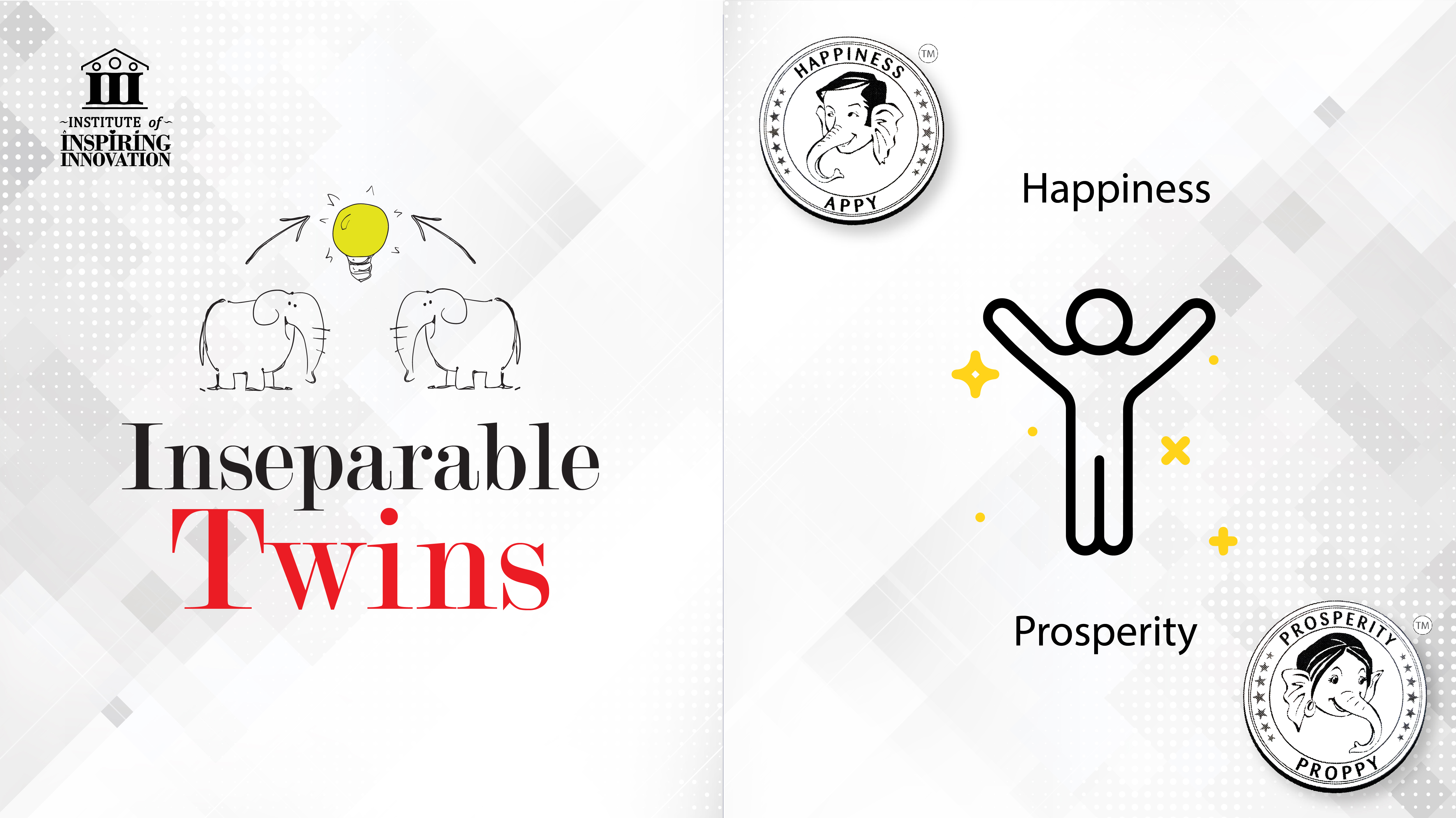 Appy and Proppy were at the lumberyard canteen for breakfast. They were tired after the early morning work. Being one of the team’s leaders, Appy stood at the door and let the team members enter the dining room. After Appy’s team filled the dining room, it was the turn of Proppy’s team. Once everybody entered the canteen, the team leaders stood at the door and wished their team members a happy Independence Day.

After the young elephants ate and headed out to their dorm rooms, the team leaders picked up their breakfast from the counter, consisting of rice pudding and sugarcane juice. The elephant twins sat with the other team leaders. Appy took a sip of the juice and wished Proppy a happy Independence Day.

Proppy wished her brother back and said, “happiness is gulping down sugarcane juice at one go.”

“Why do we usually wish happiness and prosperity in the same greeting?” Appy asked taking a sip.

The other elephants were oblivious to the discussion brewing between Appy and Proppy. They continued to discuss their work, their bosses, and team members.

Proppy took a morsel of her pudding and said, “Happiness is a state of mind, and so is prosperity. Your approach to it matters.”

Appy countered immediately and said, “Happiness can be a state of mind. But it does not work the same for prosperity.”

Proppy thought for a bit and responded. “I think prosperity is a state of mind too. People must know how much prosperity is enough.”

Appy nodded and said, “Correct. Intending to fight hunger and encourage underprivileged children to attend school, they supplied delicious and nutritious meals in schools around Bangalore. Now they run 44 centralized kitchens in 12 Indian states with help from State Governments and private organizations. They also operate a few decentralized kitchens with the help of women self-help groups.”

“They serve more than 1.7 million children every day with the food cooked in their sustainable kitchens. That’s a lot of happiness they are spreading. They are sure to grow with all the support they are getting from public and private entities.”

Proppy said, “I wonder what they do with all that kitchen waste. Our lumber yard kitchen composts it and then sell it to farmers.”

Appy answered, “The Akshaya Patra Foundation is not far behind. They create more than 350 kilograms of waste every day.”

“That was how much we both weighed a few months after we were born,” Proppy said with a mischievous grin.

Appy laughed and continued, “Their kitchens are equipped with a biogas plant that turns all the waste into gas which they use for cooking. It seems they save at least 10% on energy costs. They also use solar energy to generate electricity for their facilities.”

That inspired Proppy. He continued, “They are indeed a self-sustainable and a green initiative. All of this to make children happy and motivate them to get a basic education. I hope they spread this love for Seva (service) world over.”

After breakfast, they bid goodbye to their friends and went for a walk. The weather was overcast and looked like it would rain.

“Speaking of happiness, have you heard of Anand, a town in Gujarat, and the dairy called Amul?” said Proppy.

Appy nodded in the affirmative, and Proppy continued, “Polson, a dairy company had acquired the monopoly of collecting milk from farmers and supplying it to Bombay city after India’s independence. The farmers traveled great distances to supply milk to the company through agents who often exploited the farmers.”

“It is too bad that people exploit farmers,” Appy said with anger.

Proppy continued, “The farmers approached Sardar Vallabhbhai Patel, the Home Minister at that time, to fix the situation. Patel advised the farmers to start a cooperative and directly supply milk to Bombay. The new cooperative was called Amul and involved the farmers as stakeholders.”

“The farmers supplied small quantities of milk to a decentralized plant which pasteurized milk. The cooperative was further developed in the 1970s with the setting up of a facility in Anand. The Gujarat Co-operative Milk Marketing Federation Ltd. was set up to overlook Amul’s operations. Amul created an economic network linking 3.1 million farmers who directly benefited and prospered from it.”

Appy remembered seeing Amul products in the city’s shops. “I recall most of the advertisements that Amul put out. They were funny, trending, and to the point,” he said.

Proppy tapped her brother on his shoulder and said, “Amul is a great example for prosperity. It is a model for other cooperative societies.”

Just then, it started raining, which made Appy and Proppy bolt towards the library. The twins had left their computer there. They switched on the computer and checked if their mentor Lucky was online. To their delight, he was. They Skyped Lucky and got an enthusiastic Independence Day greeting. The twins greeted him back.

“Proppy and I was discussing happiness and prosperity. They have different definitions” said Appy.

“We also discussed two different organizations. One is Akshaya Patra that spreads happiness serving food to children. The other is Amul, which has made its farmer associates prosperous” said Proppy.

Lucky was waiting for the question. Appy was quick to ask, “From the examples, spreading happiness may not make you prosperous, and making prosperous will not spread happiness. What is your take on it?”

Lucky smiled and said, “Do you know what spreads happiness? Chocolate. And do you know which chocolate company has spread prosperity among its workers? Cadbury, a name synonymous with chocolate, one of the biggest confectionery brands in the world.”

Proppy’s ears perked up. She often caught her brother eat chocolates in secret. She smiled and prodded Lucky to tell her more.

Lucky began, “Cadbury is a subsidiary of Mondelez International. It had humble beginnings in the United Kingdom in 1914, when its founder John Cadbury sold tea, coffee, and drinking chocolate. They introduced ‘Dairy Milk,’ a chocolate bar that had more milk than other brands, which led to them dominating the market. Along with his brother and his sons, John managed the business. They also set up Bournville, a model town to set up a factory and house the workers.”

Proppy recognized the name and said, “I have seen the stash of Bournville chocolates in Appy’s bag. I am sure there are few trash cans around here with wrappers in it.”

Appy closed his eyes for a moment in guilt and then promised to share it with his sister. Lucky laughed and continued, “Actually, Bournville was named after the village. They set up a factory over there. The town had a train station too, which made transportation easy.”

Proppy asked with interest, “Why was it a model town?”

Lucky answered, “Cadbury treated their workers with respect, paying higher wages than other organizations at that time, giving good working conditions, provided pension schemes. The factory had a workers committee and a full medical staff. The town had houses with gardens, a public swimming pool, sports grounds, and more.”

“I guess Cadbury had the culture of spreading happiness from the start,” said an impressed Proppy.

Lucky paused for a moment to type something. The twins were reflecting on what was said. After they finished, he continued, “In fact, happiness and prosperity are interdependent. I think people running Akshaya Patra are spiritually prosperous, and workers at Amul are happy because they are contributing to the prosperity of the community.”

Lucky continued, “many think prosperity would mean ‘more money’; in fact, money is only one form of wealth. Ancient wisdom says there are 16 forms of wealth.”

Proppy was quick to react, “What are the other 15 types of wealth? I would love to know them all.”

Lucky again wished them a happy and prosperous week and went offline. Appy and Proppy lumbered to their dorm rooms for a round of their usual post-breakfast nap, all the while pondering about Lucky’s explanation of happiness and prosperity. It seemed they were inseparable twins; it made more sense when one supported the other.