A good intention complemented by good deeds is eXtraOrdinary 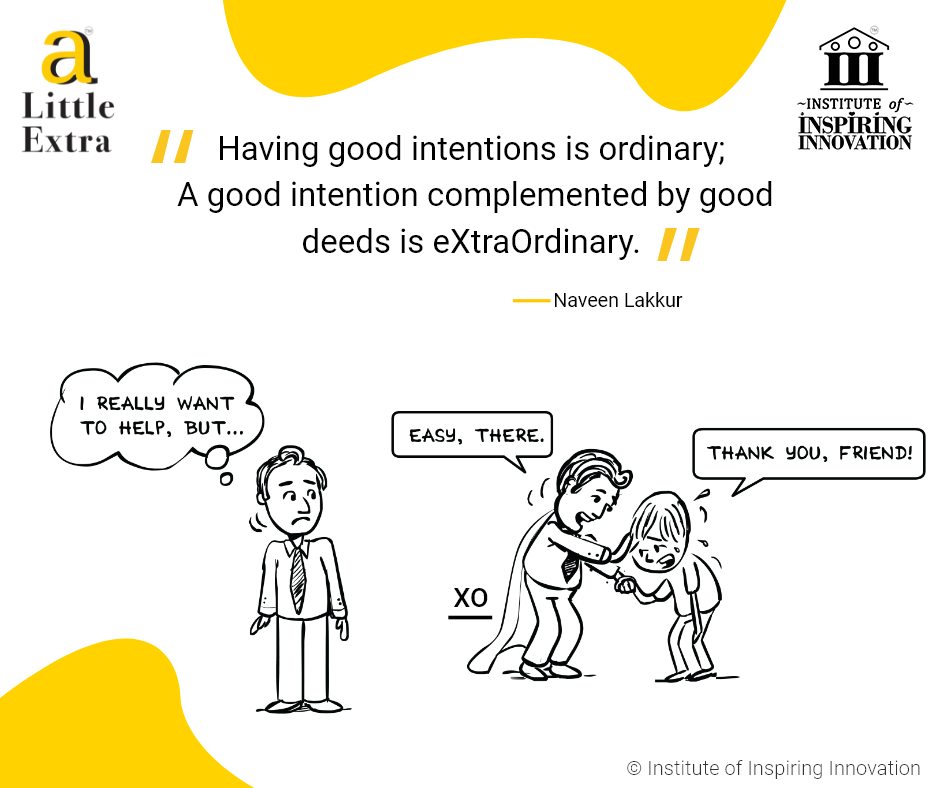 Hardworking people start their projects and tasks with the best of intentions. Some people go a Little Extra, complement their intentions by doing the good deed of making their work useful for others. The world has people who have done well for others because of their good intentions complemented by their deeds. Let us look at some examples.

Sanjit Roy had a good education. However, a chance visit to Tilonia, a small village in Rajasthan, changed his thoughts about education. According to him, the formal education system demeans and devalues traditional knowledge and practical wisdom. According to Sanjit Roy, also known as Bunker Roy, he had a real education when he worked as an unskilled laborer – blasting wells for water.

He initially started the Social Work and Research Centre (SWRC), also known as Barefoot College, to provide solutions to water problems around the village. Pretty soon, his mission included sustainable development, empowerment of the marginalized, and training. The Barefoot college also provides healthcare support to villages.

The college imparts education to women and children by keeping their different needs in mind. They are taught vocational skills in solar energy, healthcare, handicrafts, and accounting, emphasizing hands-on learning. Classroom instructions are mostly through visual aids and hand-on on-the-job training.

The training did not stop for women in Rajasthan only. The college trains women from Afghanistan, Bhutan, Fiji, Mozambique, Sierra Leone, etc. To overcome communication barriers between women from various ethnicities and regions, they learn to communicate through sign language.

The New York Times has written an article about his work in bringing African women to train to install solar panels at their Rajasthan facility. Many of these women go back to their village to electrify their village. That’s an outstanding achievement.

Around 25% of people living in urban areas in Africa do not have access to electricity. When the sun goes down, people huddle around the dim light of a kerosene lamp instead of turning on the electric light.

In 2012, Xavier Helgesen co-founded Zola Electric, formerly known as Off Grid Electric, to provide solar and electricity storage systems in five African countries. Over the years, Zola evolved from a small startup that offered basic energy packages into becoming a hardware company that builds sleek and scalable power systems rivaling the existing grid in performance.

The company also designs its hybrid systems. Its new grid system, Infinity power, combines solar technology with energy storage to serve as an alternative to diesel generators, with the ability to switch between solar power units, existing grid, and backup generators. It can also draw on multiple energy inputs and a smart storage system to provide continuous power.

Over the years, Zola Electric has minimized energy costs and carbon emissions. The co-founders started with Zola Electric with a good intention to eliminate the use of kerosene lamps that are not environmentally sustainable and then complemented their intentions with a good deed of offering technically advanced solutions lighting up homes in marginalized communities.

Muhammad Yunus started his career as an Economics faculty at the Chittagong University. From 1974, he began his studies into the economic aspects of poverty as a famine swept through his country of Bangladesh. He experimented with various ways to educate others about poverty, but he realized it could not address poverty at large.

With the belief that ‘credit is a universal right,’ he began a microloans program, a credit system designed to meet the poor’s needs. Mr. Yunus’s belief that everyone is a natural entrepreneur. The borrowers can borrow as small as $25. In a few years, this experiment became a success.

He started Grameen Bank in 1976 and provided small loans to the poor contrary to the big banks that refuses to lend small amounts. With this, he started the new microfinance movement to eradicate poverty from the world and foster entrepreneurship in rural Bangladesh.

Over the years, they have formed partnerships with foreign-based social businesses to not only provide jobs in Bangladesh, but they have also tried to eradicate malnutrition. One such collaboration is with the French company Danone. They floated Danone Grameen to give fortified yogurt to malnourished children.

They formed partnerships with water company Veolia to provide safe drinking water, and then with McCain, they went into a joint venture to help farmers in Colombia increase crop yields. Grameen Bank’s operations have also gone far and wide. To extend their ‘lending hand’ to people in poverty globally, they established in the USA with 19 branches in 11 cities, including New York.

Grameen Bank has around nine million borrowers, out of which 97% are women. Their repayment rate is 99.6%. Whereas in the USA, women comprise 100% of the borrowers.