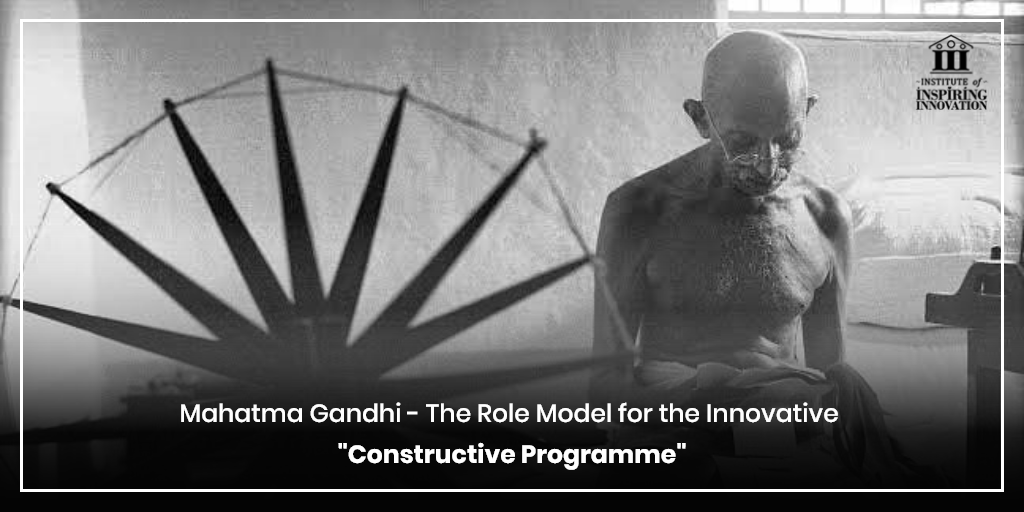 We know Gandhi as a political leader and a champion of non-violence. He was also an innovator and a disruptor who taught us a lot about design and leadership.

Who is Mahatma Gandhi? The man at his Charaka or the spinning wheel, spinning away. Little do people know that this device was a revolutionary design innovation that paved the way towards sustainability. Sustainability was part of his ‘Constructive Programme,’ a manual to achieve true independence. Let us explain both.

The British colonizers had control over trade in India. The world knew India for its fine cloth for centuries. The British put an end to it and moved the industry to Manchester. They would take India’s thread, make clothes at their industries using large machines, and returned the finished goods to India and their other colonies at unaffordable prices.

These ‘modern’ machines were large and not transportable. Importing the bulky spinning wheel was out of the question, considering the British control over ports in India. Gandhi called for a solution, a part of his ‘Swadeshi,’ an earlier version of the ‘Make in India’ movement. He wanted an ‘easy-to-carry’ device that Indians could proudly handle.

Gandhi’s associate Maganlal Gandhi came up with a creative idea, a portable cloth spinning device that broke the British monopoly. The designers came up with an ergonomic, hand-powered device that could be manufactured affordably with readily available materials. It was optimized for portability and could be slipped into a box and carried around like a briefcase. The box Charaka became a revolutionary innovation.

As a part of the ‘Constructive Programme’ to make India self-reliant, the revolutionary Charaka, a ‘Made in India’ equipment, allowed millions to create the fibers enabling the creation of fabric locally for domestic consumption. It created jobs while producing eco-friendly products and enabled ordinary citizens to compete with imported goods. Charaka became a symbol for self-reliance and sustainability.

If we have to develop economically and socially, we need a similar equalizer, which can become a catalyst for social change. Gandhi taught us to innovate by helping Indians with behavioral change and creating possibilities to escape poverty.

According to Gandhi, behavioral change was essential to achieve independence from colonial rule. Before India gained independence, it had to achieve true independence. When Gandhi returned to India in 1915, the people of India were already desperately fighting for freedom. But many factors were stopping India from achieving it. He thought he had to understand India first.

He traveled the length and breadth to understand India’s complexities. He learned that India’s problem was more social than political. He realized that most of the Indians were struggling due to extreme poverty, religious unrest, and caste struggles. For them, surviving was more important than participating in agitations and debates. He resolved to involve all the Indians, not just the elite few.

Freedom from foreign rule was not enough. India had to grow from strength to strength after the regime change. True freedom would not have been achieved, with millions of Indians still living in indignity. Hence, he advocated for ‘Sarvodaya,’ a rise for all, not just a few wealthy and privileged Indians.

He created a ‘Constructive Programme,’ an innovative manual that guided Indians towards practicing sustainability, non-violence, and cultural preservation. At the same time, millions of Indians suffered due to many social evils like caste-based crimes and disharmony, something the British administration took advantage of. The ‘Constructive Programme’ manual created a model to remove social vices like untouchability, communal disharmony, illiteracy, etc.

He believed that when Indians achieved Sarvodaya, they could ask for freedom. With millions of Indians by his side, he launched the non-violent freedom and civil disobedience movements, an innovative approach to the Indian independence movement.

These examples showcase how critically important innovation and design thinking is, which Gandhi practiced and created a phenomenal impact. They are critical even today as we strengthen the economy, inspire creativity, innovate, and grow, something innovators, entrepreneurs, and policymakers can learn from.

I am glad you liked it.

The same is the fate even after 70+ years of independence. The large rice mills, sugarcane mills are now redundant. We see lot of political clout that controls these machinary in rural and town regions. Those who own these mills can control the agriculture in the region and soon become netas. Akin to British colonization.

Democratizing the technology would leverage the rural economy.
I would call it Miniaturizing the Machine. Charaka is a good example of it. Anyone can make anywhere, any amount of fabric to anyone. True Democratization of technology. Today mini rice mills, sugarcane mills and oil pressers are turning the tables.
You have identified it well that charaka is the symbol of technology democracy.