Gaining the status is eXtraOrdinary 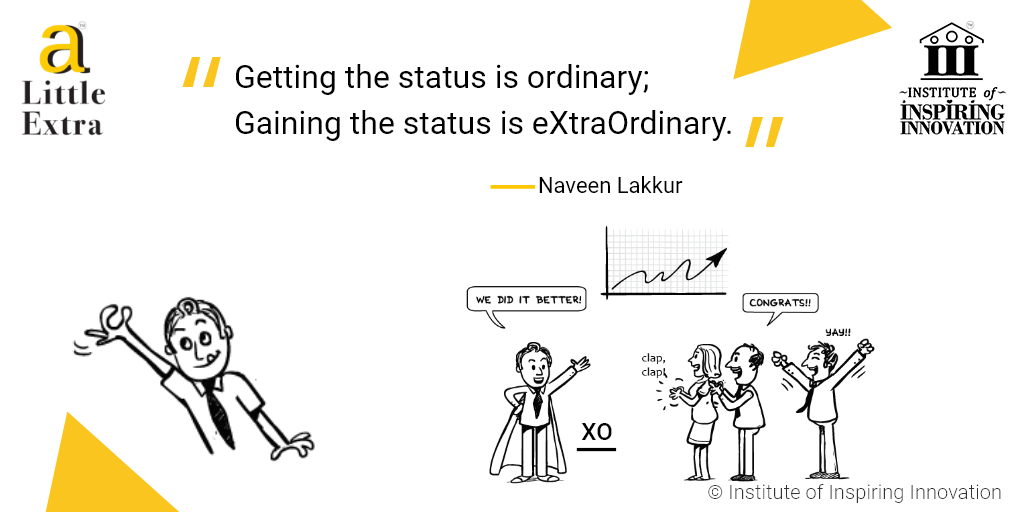 Nothing is indeed handed over to us on a silver platter. Everyone must work hard to get the status. Even people born in a wealthy family must keep working hard to keep their status. Some people go a Little Extra and then make themselves so useful that they gain the status. Let us look at people who have achieved status in a hard (smart) way.

Satya Nadella took over the reins of Microsoft during its most challenging time in 2014. He revamped company policy and product lines, changing how the company has positioned itself to customers and increasing its stock price.

Satya Nadella was born in Hyderabad. After his engineering, he began his career with Sun Microsystems. In 1992, he joined Microsoft as a software engineer when Bill Gates was the CEO. He was passionate and had a competitive mindset with an uncanny ability to keep the team together. His attitude made him climb the corporate ladder quickly.

The defining moment came when he was tasked to head Microsoft’s search portal and advertising platform group after 15 years in 2008. He laid out a plan and emailed it to everyone in his group, which involved developing destination search experience, reinventing the MSN portal, scaling the ad platform. He emphasized innovation within the team.

He was able to see ten years into the future, and he correctly predicted that cloud computing was the future when most of them did not. He helped move Microsoft’s services to the cloud. He ran every Microsoft unit like he was starting a venture, planning, and setting expectations. When he saw the need to improve services, he looked to collaborate with friends and rivals alike. He also oversaw key acquisitions of startups to improve offerings.

Before heading the search portal and advertising platform group, he started his ascent by improving web services for small businesses. Then, As VP of Microsoft Business Solutions, he worked to build their cloud-based CRM, and then as VP of Microsoft Online Services, he became in charge of Bing and the early versions of Microsoft Office and Xbox Live.

From 2011 onwards, he oversaw Azure cloud platform growth, and then products for companies’ data centers like Windows Server and SQL Server database. He increased revenue from $16.6 billion in 2011 to $20.3 billion in 2013.

After becoming CEO, he took risky and controversial decisions that proved to be right and increased Microsoft’s year-on-year revenue. He allowed open-source competitor Linux to operate on Azure; he had MS Office released on iOS and improved the Office365 offering attracting both enterprises and consumers back to the company.

Two of its successful buys are LinkedIn, the popular professional networking platform, Minecraft, a high revenue-generating game, and then GitHub. Though GitHub is not generating revenue directly, Microsoft is getting direct access to developers. With his gambles, he has proved why gaining Microsoft’s CEO’s status has been beneficial to the company and has empowered companies and individuals to achieve more.

After getting a Master’s degree from Yale Management School, she joined PepsiCo and started to work hard (smart). Whichever unit she went to, she acted in charge, which drew the attention of the management. She could research and simplify complicated issues. When she became CEO 12 years in, she had a tough decision to overhaul PepsiCo’s IT system.

To that end, she read books cover to cover, spoke to professors, and did the legwork to identify the right solution for the company. When she took over as CEO, she had to project confidence and a can-do-spirit. She shook up the company’s product offering sending shivers among the investor pool, but she stayed resolute.

She successfully introduced healthy snacks and drink products to PepsiCo’s product line, increasing revenue. At present, half of Pepsi’s revenue comes from healthy snacks as against 38% in 2006. She also had a good eye for design. Early into being CEO, she would go to grocery stores to see how products looked on shelves, learn about packaging and placement, and then send critiques to the design and marketing teams.

She believed in giving customers a great experience aesthetically and in their product line. She also encouraged her team members to be innovative. She boldly stated that Pepsi would address obesity, something synonymous with the fast-food industry. Pepsi Natural, a product with natural products, found consumers among the health-conscious younger generation, is an example of innovation.

When the going got tough, she helped Pepsi revamp their offerings and changed people’s perception despite receiving criticisms. Someone told her to stick to her job of selling soft drinks, but she worked undeterred. Throughout her career at PepsiCo, she set realistic goals and encouraged her team members to do the same. Her vision and work ethic enabled her to gain status as the CEO of one of the world’s biggest companies.

Mary Barra had a humble upbringing. She joined General Motors (GM) at the age of 18. She went on to study electrical engineering at the General Motors Institute, now known as Kettering University and got a Masters (MBA).

She has worked in several capacities in the company, and at one time, she had been a Manager at the Hamtramck assembly plant in Detroit. She wanted to grow in the company, so she looked for mentors early. She turned to experts within the company to discuss and learn. One of her mentors advised her to speak her mind and listen, a piece of advice that she followed to date.

Her eye for detail, the ability to inspire innovation helped her gain the status of the CEO of GM. Even as CEO, she encouraged the engineers and designers to innovate. One of the top priorities was to develop autonomous cars. She oversaw the development of the autonomous vehicle in partnership with Honda. On the other hand, GM beat Tesla in coming up with a moderately-priced, long-range electric vehicle.

Mary Barra is the first woman to be a CEO in the automobile industry and the first woman CEO of GM. Due to her values and commitment towards innovation, she brought GM back from bankruptcy in 2009 back to the helm, gaining the status of influential CEOs.