eXtraOrdinary Individuals Take Everyone to the Finish Line 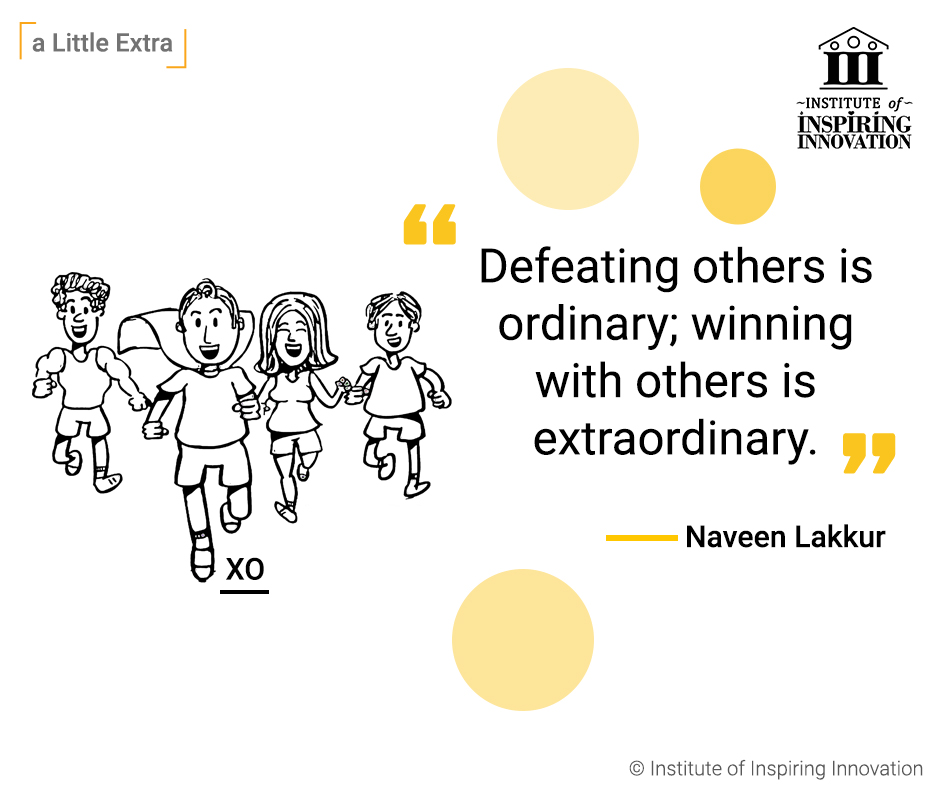 “Defeating others is ordinary; winning with others is eXtraOrdinary” – Naveen Lakkur

Gone are the days that we do everything ourselves. We live in a collaborative world. The question is, are we developing the mindset for creating a winning proposition for everyone? Or are we caught up in our minds with the desire to defeat others?

The story of collaboration between Wipro and Infosys is one of the perfect examples. Wipro and Infosys, two of the big-3 of the Indian IT industry, are considered competitors in the Indian IT industry. They both were outperforming each other in the software services business. But when the market opportunity opened for automation of the banks in India, they came together with complementing skill sets.

Infosys had their core banking product and Wipro with its computers, servers and networking equipment, they solved the customer pain point and together created a winning proposition. Today, due to a Little Extra effort by the unlikely duo, most of the banks run on the innovative banking solution called Finacle. This collaboration is one of the examples where co-opetition leads to winning together.

The corporate world is no stranger to competition where defeating others within the company for recognition is ordinary. It is a norm to ‘get ahead’ of others or ‘climb the corporate ladder’. Only the one who persisted longer would win. Managers who thrive on collaboration among their teams are few and far between.

The company has used collaboration in two ways. The first is that the team made different applications work in tandem so that they work as one. The second is the cross-functional collaboration. Their uniqueness is a collaborative team that sits together, decides on their focus areas and works in progress towards theirs and their customers’ success.

They have to learn every other function of the organization. For example, graphic designers learn about web designing, and web designer gets to learn digital marketing. With cross-training, people had a broader set of skills that they could use during their interactions with customers.

This approach improved teamwork, productivity, and then an improved customer service because the team members covered for one another, made everything run smoothly.

Very difficult in practice. There has to be only one good king surrounded by good ministers. One person at d top to make decisions n others to coordinate. Ramrajya was Ramrajya becos of that. Joint families also work more towards success of businesses. Collaboration n breaking up has its own disadvantages in d present day. Being nations, we hv forgotten what it is to be humane to human beings.