You dominating desire is eXtraOrdinary 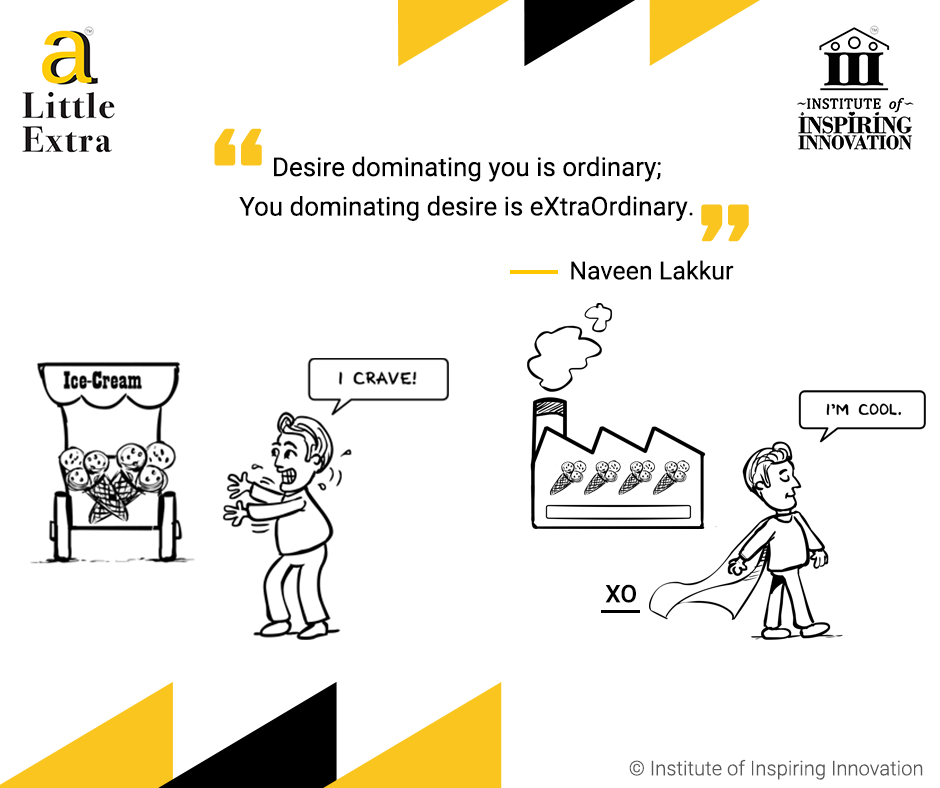 “Desire dominating you is ordinary; You dominating desire is eXtraOrdinary” – Naveen Lakkur

As humans, we all have desires, the desire to instantly gratify with our favorite food, with a particular utility that could make life easy and complete our tasks quickly, or something cool and trendy. The instant gratification of our desires is pleasurable, and it satisfies us so that we can move on.

Some people go a Little Extra to use those desires to build a business. They delay their desire to buy that delicious food or the product that could make life easy so that they can create innovative products or a system. Not only do they delay gratification, but they also create something that could add value to people’s lives.

At this time, we would like to introduce you to the temptation and contentment loop, you will see how desire plays as human nature. The little extra conscious effort required it to recognize and channelize it. 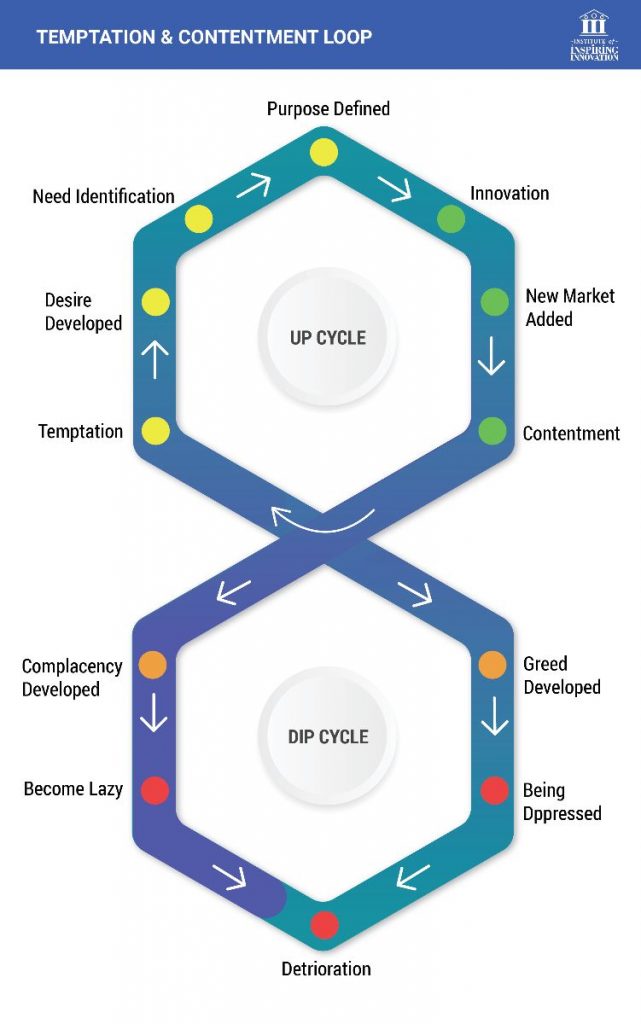 In the upcycle and the dipcycle, desire gets developed, and the need gets identified, after that, the purpose gets identified. After this, innovation happens and a new market is added due to a product.

If temptation leads to the development of greed, then it will lead to depression, and then deterioration happens. On the contrary, if the person stops innovating, complacency creeps in, and then, the innovators become lazy, and then their business deteriorates.

At first, there was a desire for themselves. They then wanted to figure out if there is a similar desire in others, or is there a need for that product. That is where the need identification came in. After this, they defined their purpose. Many achievers have delayed gratification, went through this temptation & contentment cycle to pursue their dreams, create an impact through their innovation.

Let us look at a few examples.

Pastry chef Pooja Dhingra a foodie started her journey as a foodpreneur due to her love for baking. Her entrepreneurial journey began when she went to France to study hospitality, where she ate macarons. She wanted to make and sell them in India. When she came back to Mumbai, she struggled to get the recipe right.

The hot and humid weather in Mumbai spoiled her macarons, and the local chocolate and other ingredients were not of the standard the recipe demanded. She decided to innovate by mixing local ingredients with imported goods. After she got the product right, she had to set up a store.

She struggled through the setting up process and began operations of India’s first macaron store at the age of 23. The name of her baking company Le15 Patisserie, one of the most popular baking brands in Mumbai today, is a combination of the number 15, the street where she lived in Paris, and Le for her culinary school Le Cordon Bleu.

Over the years, she has written 3 books and is running noSugarcoat, a podcast where she talks about food and business. Despite facing many challenges while building the baking company, she jokingly says that the toughest challenge is not to eat the food, which we think represents her commitment to dominate her desires.

She started with three employees and grew with more than 400 employees today. She also trains pastry chefs, some of whom work at Le15. She has combined her love for traveling with food, mingling foreign foods, and cooking styles with hers. Macha is one of the dishes from Japan she brought back and included in her menu.

Her desire for food and exposure to macaroons in France was the beginning of a new journey. She dominated her desire, went a Little Extra, and created a new market for the dish in India. Watch her story.

It is more than a desire for us to drink water. It is one of the five necessities. It is a practice to provide water in restaurants without a charge. With a decrease in water quality restaurants world over has been providing diners with bottled water. Customers can also get aerated drinks and soda for the same price, which is a trend for the past two decades or so.

Bottled water’s expense covers the cost of water purification, bottling, marketing, and distribution. People who cannot afford to go to buy bottled water know the struggles with water supplied by the city corporations and finding the source of groundwater. With groundwater depletion, and due to shortage during the hot seasons, not all people can have access to clean water. No amount of aerated drinks can replace people’s desire to drink water, which is a real thirst quencher, whether they can afford it or not.

Today, water has become an aspirational commodity. Parag Agarwal saw water as an opportunity to solve the critical problem of scarcity of this precious resource. Known to the business circles as a ‘Jalpreneur (waterpreneur),’ along with his brother Anurag Agarwal, he founded Janajal, a social enterprise to make safe drinking water accessible, available, and affordable to people. The organization approached the problem uniquely.

Its innovation is the installation, operation, and management of water ATMs, and water-on-wheels (WoW). It is also approaching state governments to look after the existing water infrastructure. It has installed water ATMs, and water dispensing points at different locations in Mumbai and local railway stations. The social enterprise sells 250 ml of chilled water for ₹1, one liter at ₹5 and 20 liters for ₹20, which is competitive compared to bottled water which sells at ₹20 for a liter.

According to Parag, Janajal does away with packaging, labeling, distribution, logistics costs, and reseller margins. Though the founders know that it will not solve water problems permanently, it makes water available to people efficiently while avoiding water wastage and eliminating costs. The company has managed to raise funds through Tricolor Cleantech Capital, a social impact fund, to further expand its network.

With their desire to grow their business, the Agarwals have dominated their desire by not setting up a bottled water company and have provided people with affordable and clean water. We hope that they can help more people get desirable access to water. Watch their story.

Story 3 – Good Citizens of the Road

The desire to see autonomous cars have dominated car lovers’ heart for many years. Like their non-autonomous siblings, they must be able to get us from point A to point B without being guided. However, when they cannot tell between a person and empty roads, disaster ensues.

With the concept that cars are ‘social’ alongside other human-operated vehicles, cyclists, and pedestrians, Perceptive Automata is an automotive startup founded in 2015 to make the presence of autonomous cars a mundane thing. The startup is working to ensure the safety of vehicles and people sharing the same road.

The company has combined behavioral science techniques with machine learning to give autonomous vehicles a capacity to anticipate human behavior, enabling smooth navigation around pedestrians, cyclists, and other vehicles. The project is spearheaded by human cognition expert Sam Anthony and machine learning expert David Cox.

There are many startups and companies worldwide that seem to put the finishing touches on this capability. Perceptive Automata is going a Little Extra to innovate further and give it the ability to avoid trees, recognize signals and signs, share the road with other modes of transportation like trucks, eliminate crashes, and follow traffic rules.