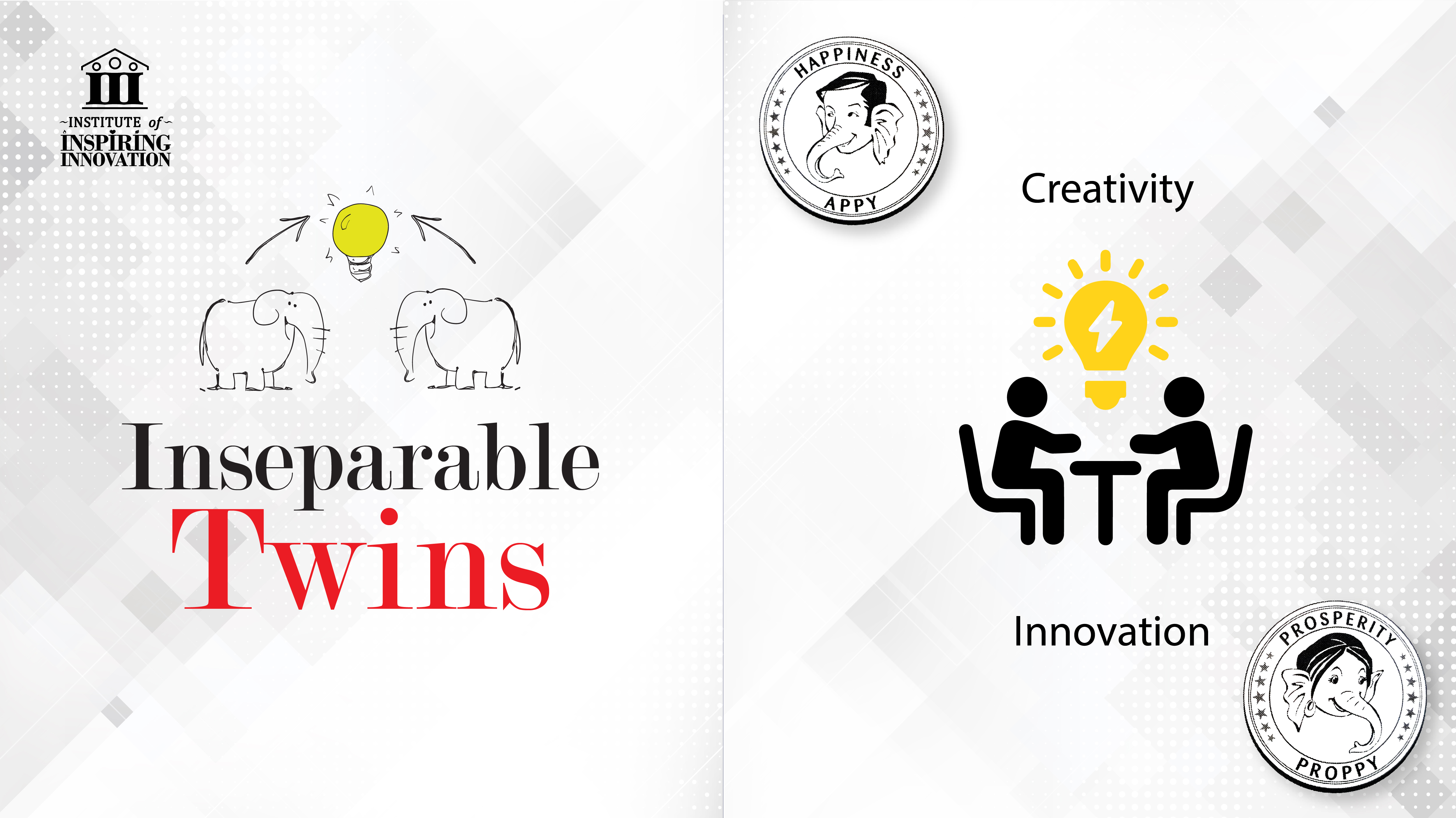 Appy and Proppy were back in the city and were enjoying their day off from work at the lumber yard. They were talking about how their work was monotonous. The conversation soon turned to whether they must use creativity at their workplace or not, and how creative elephants are.

“Remember grandpa’s stories about how his great-great-grandpa worked for a great king to build the big temple? I have seen it. It is a work of art. Very creative,” said Appy.

“Yeah, do you know it was grandpa’s great-great-grandpa who placed the final stone on the temple tower?” asked Appy excitedly.

“My biggest achievement is putting the last log on top of the pile of logs. Where’s creativity in that?” wondered Appy.

Appy, after a few seconds of silence, said, “I think creativity is innovation. They are never different.”

Proppy, shot back saying, “I disagree! It is different. Actually, I think, one is a subset of the other.”

Few steps ahead, they would have reached their mentor, Lucky’s office. However, both of them stopped by a café and stood facing each other. The people in the café were aware of what would happen if two elephants came face-to-face. Some were horrified, and some took their smartphones and started recording the conversation. It looked like they would take the café down with them. But little did they know that unlike others, Appy and Proppy engaged only in constructive debates.

“Some people refer to creativity as innovation”, started Appy. “Both means you show ‘originality in thought’ or ‘imagination.’ When you want to work on something new or give something a tweak or a new lease of life, then you need creativity.”

“Companies that focus only on creativity will suffer”, retorted Proppy. “Innovation is the only element that sustains a business. Creativity is the first part of the innovation process. Innovation is the real value generator. Innovation moves the idea through different stages so that the said product has value to customers.”

Lucky, who was sitting in the cafe, came out to see what the people in the cafe were craning their neck to look at.

“Guys, these people think you both are about to have a fight. Come in at once before one of them calls the forest officials,” he advised.

Both Appy and Proppy were ecstatic to see their mentor. “Lucky, I did not expect to see you here,” Proppy said.

“I come to this café sometimes,” Lucky said and pointed to the empty table at the corner. “Come on in and let us continue the discussion.”

The café was bustling with activity. The elephants saw people huddled together,  discussing, and sipping tea. The elephants saw a mix of white and yellow drapes. The interiors felt like home. There was a photo-booth where people could pose with guitar placed next to an antique chair, and some of them reading books that they picked up from the shelf.

The elephants made their way to the table with Lucky’s computer on it. Lucky’s cup of tea was steaming, inviting Appy and Proppy to order their own.

“You both must try the creamy cold tea here”, Lucky told the elephants and proceeded to order the same for them both.

Appy, who was anxious to continue the debate said, “Lucky, Proppy here says creativity is part of the innovation process.”

Proppy, with a stern look on her face, said to Lucky, “And Appy thinks innovation and creativity are the same and interchangeable.”

Lucky said, “I heard your argument outside of the cafe. Pointing at Appy, he asked, “What is creativity?”

Appy, who was sitting with his arm resting on the sofa’s armrest, sat straight and said, “Creativity is all about coming up with ideas, solutions, possibilities, and alternatives. It is the act of conceiving an original concept. Creativity is the first step towards finding a way to solve a problem. There can be creativity anywhere, whether in sports, business, or within a marketing team.”

Lucky turned to Proppy and asked, “What is innovation?”

Proppy, was sitting cross-legged. With a smile, she said, “It does not matter how creative you are or how many ideas you come up with. If you cannot convert them, then ideas are merely artifacts that do not add value to future generations. You create new technology, a new method of production, or improve an existing product to create value for an organization, public, or the government through innovation.”

Appy shot back, “But without a good creative culture, ideas do not generate themselves,”

Proppy countered, “But how many people have said that they have ‘invented’ something, only for the idea to be pushed to obscurity? People take their ideas to fruition only by working on them, not by sitting on them.”

“What do companies need the most? Is it innovation or is it creativity?” Lucky asked.

“Innovation it is. Innovation helps create value out of ideas,” said Proppy.

“Anyone can,” retorted Appy.

“Both of you are right,” interjected Lucky. “I once went to a company, sat with a team full of product designers and engineers to talk on the exact two topics you two are arguing about. I asked the team to take a twenty-minute break to brainstorm a few ideas. They did so and came up with more than 200.”

“What did they do with those ideas?” asked the twin elephants together.

“They shortlisted an actionable few,” said Lucky. “They then picked one of the ideas and worked on it.”

Lucky looked at the elephants who were both nodding as if they had a revelation.

“Now the team still follows this process,” continued Lucky. “They have offices all over the world. But this team of designers and engineers are lauded because they create such unique and actionable ideas and then bring them to fruition. They do it all over again if they have to improve upon that design.”

The elephants looked at each other.

Lucky asked both the elephants, “What does that imply?”

With a shrug of his shoulders, Appy said, “I think you said it without actually saying it. Creativity and Innovation are inseparable twins like the two sides of the same coin, supporting each other”.

Proppy added, “I believe that in huge corporations, they have separate teams for ideating and to put those ideas into action or both the processes happen in the same team.”

“You are absolutely right,” said Lucky. “I have seen both work. For creativity to work, offices must encourage employees to show creativity or hire someone for it. They must give employees space to come up with ideas. Companies must imbibe creativity-nurturing into their DNA. What I have realized is that great ideas do not come to slacking employees. They come from employees who are engaged often, and through brainstorming sessions.”

“After the team collects the generated ideas, the ideas must go through another session to weed out those that are actionable and non-actionable. Both humans and animals are innovative when need be,” concluded Lucky.

“Whatever you see here in this cafe is creativity and innovation at work. Tej Prathap named this cafe Chit Chat Chai to encourage people, even strangers to start a conversation over different types of tea. They have researched quite a bit to create over 250 varieties of tea served as cold or hot beverages. They specialize in tea and they present it beautifully. The entrepreneur wanted to give people a place where they can come together as interest groups to share experiences or for entrepreneurs to network or teams to generate ideas or to become friends with complete strangers.”

The twins looked clearly impressed with the decor. For them, the wood in the furniture looked familiar. Appy jumped off his chair and said, “The wood used for the furniture in this café came from our lumber yard. I know the smell.”

“The furniture is placed in such a way to give a little more space for customers, while the café itself is built with makeshift material without compromising on the quality of design and esthetics, making it look elegant. That’s creative. And I think running a business for helping people bond over tea is an innovative idea,” said Proppy.

“Correct. Even the cell phones these people used to record your conversation is an example. Manufacturers have revolutionized communication with creativity and innovation.”

The elephants got off the sofa. Before heading for the door, they lifted their trunks to show their appreciation for Lucky.

“I hope this will be a regular session. I think we will be back next week to learn something new,” Appy said.

They were about to go to meet the owner to tell him how much they loved this Café concept when the owner himself showed up. When they let him know what they thought, He said, “even I enjoyed your conversation and the learning”. He then informed them that the tea they had was on the house.

“Now we will come to the café regularly and use your creative space to spark our innovative thoughts. Also, we want to know what keeps Lucky going,” Proppy told the owner.

“Thank you. I will be happy to serve you”, the owner said.

The twins said their goodbyes to Tej and Lucky before heading out.