Connecting the Dots for Leadership Lessons – by Naveen Lakkur 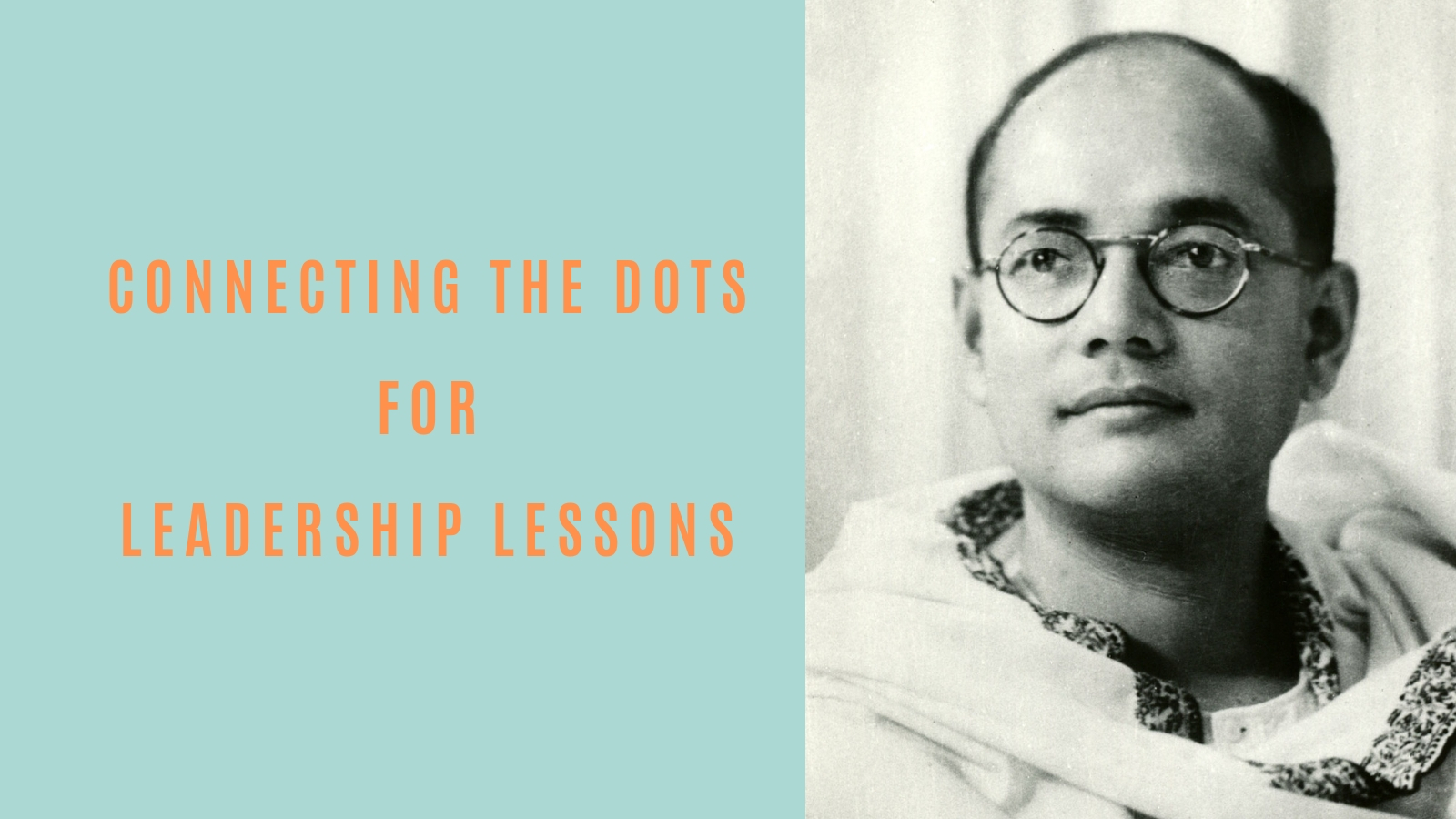 They say, “History repeats”, especially when the outcomes are not a good one. Maybe we are not learning from history. Instead of creating a new history, we may be repeating the same mistakes. Once my boss at work asked me, “Naveen Lakkur, do you want to learn from your mistakes?” Without even a blink, my response was a big YES.

He is the same boss who told me once during a casual conversation over a cup of tea that there are 2 rules.

With a hot cup of tea in my hand, only thing I could do was to smile. I have a lot of respect for my boss as I got to learn many things from him and he demonstrated leadership.

Oh, Hold on! We started with History then to the Boss & related him to Leadership. Let’s connect these dots and explore possibilities to learn from it.

Subhash Chandra Bose is one name that strikes and stands-out if the key words are to be History, Boss & Leadership.

Bose was the founder of Azad Hind (Provisional Government of Free India) and was its Prime Minister. He was charismatic and influenced millions. “Give me blood, I will give you freedom”, he said. Whoever passionate for a free India came to join the movement, he took them in. He also formed the Azad Hind Fauj (Indian national army or INA) in 1942. Its objective was to free India from foreign rule by any means necessary.

The Government of the Azad Hind had a cabinet headed by Bose who was also a Minister for War and Foreign Affairs, and the commander of the Azad Hind army. Just after his 122nd birth anniversary on January 23rd, the Government of India remembered the contribution of the INA on Republic Day (January 26) by having INA veterans participate in the Delhi’s Republic Day parade.

Over the years, many people from different sections of society have taken lessons from his quotes and from his life. We think this tremendous leader has leadership lessons to teach entrepreneurs and business leaders. Let’s look at three of them.

Bose was a rebel while he was a teenager, evident while he physically manhandled a British lecturer in college for insulting his race. He was part of the non-cooperation movement led by Mahatma Gandhi. However, he had a falling out with the leaders of the movement due to differences in vision. He did not create a rift in the Congress party though he had a backing.

Bose quietly left followed by some his staunch supports to create the Forward Bloc. He left to fight on his own because he knew India needed the leaders he once followed. Dreaming of complete freedom while the leaders pushed for dominion status under the British, he opposed their decision to support the British and the allies during World War-2. In his mind, this was a chance to hit back at the British.

He was a follower of Swami Vivekananda and gave nonviolence a try but did not continue to follow it. “Freedom has to be taken”, he declared. Even if no one joined him, he resolved to do it alone. For him nationalism took precedence. He understood that if the British administration had to control India, it had to do with the help of its natives.

Another disruption in his approach is that he took help from women in his administration and his army. Lakshmi Sahgal or Captain Lakshmi was made the Minister of Women’s Affairs in the Azad Hind government as well as the head of the Jhansi ki Rani regiment. The Soviet Union was the only country that is known to actively deploy women to battle.

Later the USA, UK, and Nazi Germany allowed participation of women in a small way. Bose felt strongly that women were neglected and suppressed by archaic Indian social laws. He thought even women should fight for the freedom of their country and for social emancipation.

He used the power of volunteer enrollment to build a great team whose members were equally as committed as him towards the cause of independence for the Indian subcontinent. The INA members were all volunteers and he did not force or coerce anyone to join the cause. At first, Rash Behari Bose and some prisoners of War (POWs) were at the helm of affairs. However due to differences, the INA disintegrated, only to be revived by Bose later.

He gave INA a proper structure and became the head. It inspired former POWs and Indian expatriates in Southeast Asia. Though in contrast to a much bigger British Indian Army and today’s professionally trained and well-structured Indian Armed Forces, he managed to organize in such short notice which is a testament to his organizational abilities.

He also collaborated with others to achieve that goal, even if it meant to make a deal with the devil of Nazism and the juggernaut called the Japanese Empire. The INA was trained in different kinds of warfare. Although the INA failed to secure independence for India during the world war, at later stages however, the nationalist sentiments remained rife among Indians in the army and in civil life.

After escaping from a house arrest the British put him, he traveled to Berlin where he met with Hitler in Berlin and formed an Indian legion in the German army comprising of Indian soldiers who fought in Africa.

During his stay in Germany, he ran the Azad Hind radio. His weekly news bulletins were in Bengali, Hindi, Tamil, Telugu, Pashto, Urdu, Punjabi, Marathi, and English. Thousands of Indians who wanted the same joined the cause.

Moreover, he managed to get an equal pedestal with both his friends and enemies. Even though he shook hands with Hitler and the Japanese, he did not agree with their racist policies. The people in the legion and later in the Azad Hind Fauj had one kitchen for people of every faith, caste and creed. The INA had dealt with communal differences which is the right ingredient for a team undertaking any venture.

The INA soldiers captured during the world war were put on trials. However, it did not quell any desire to expel the foreigners. It contributed to the Royal Indian Navy mutiny or the Bombay mutiny of 1946. Although the mutineers surrendered after a standoff, the British knew where the country was heading.

The administration decided to grant independence paving way for a hastened exit as the British presence in India was no longer tenable. His goal of turning loyalty of millions of Indians away from the foreign administration towards a new India was achieved.