If you can lead in the line that you started, that’s eXtraOrdinary

Home Articles a Little Extra If you can lead in the line that you started, that’s eXtraOrdinary
Naveen Lakkur / a Little Extra, Quotes / 0 Comments 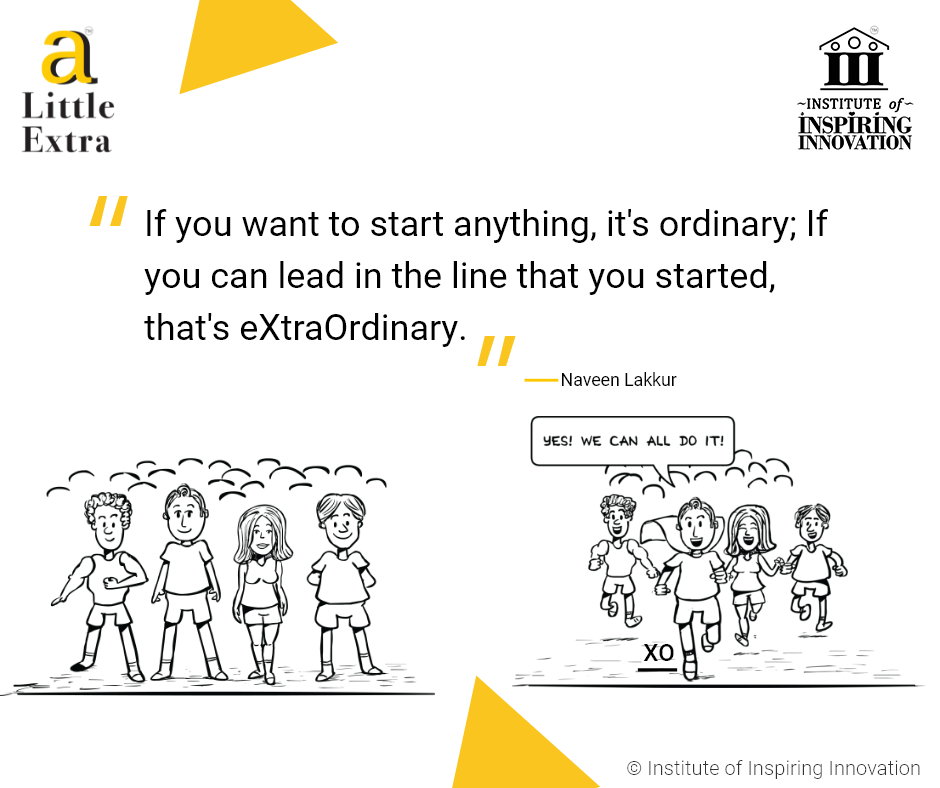 “If you want to start anything, it’s ordinary; If you can lead in the line that you started, that’s eXtraOrdinary.” – Naveen Lakkur

It is appreciable that self-starters begin a new project or a new venture on their own. Only a few people take the lead and make people follow their lead in any project or venture they start. If you have seen migratory birds, you will see they fly in the shape of a ‘V.’ The bird at the lead takes the most friction and the most resistance. Yet they reach their destination. Starters who lead from the front too take the most resistance and friction. We have a few examples who started something good and lead people through.

Nalli Chinnasami Chetti, a weaver who belonged to the Padmasaliyar community lived in Kanchipuram in the late 1800s. He would weave exquisite silk sarees, cycle all the way to the fortified city of Madras to sell the sarees. His sarees became so popular that word got out to the British as well. He even got the honor of gifting a saree called ‘Durbar Pet’ as a souvenir to King George V during his visit to India in 1911.

In 1928 he rented a house in the shopping neighborhood of Tyagaraja Nagar in Chennai to establish Nalli stores. The shop took off and was successful despite the strict no-discount policy. Its popularity reached beyond Chennai and Kanchipuram. During WW2, when most traders left the city due to fear of the Japanese invasion, Nalli committed to keeping the store open, increasing its reputation.

Chinnaswamy passed away in 1958, but his demise was not the end of the brand Nalli. His grandson Nalli Kuppusamy Chetti took over and further grew their business trademarked Nalli Silks. Nalli Silks became a brand people bought for festivals, not only from Chennai, but they got customers from far and wide. In 2005, Chinnasami’s great-great-granddaughter Lavanya joined the company after her degree. The number of stores increased from 14 to 21 at that time.

She went to Harvard for an MBA, met her husband Abhay Kothari. Few years after working at McKinsey and as Vice President of Revenue and Shopping experience at Myntra, and rejoined Nalli in 2015. While her father Ramanathan Nalli takes care of operations, exports, and off-line stores, her younger brother is in charge of Nalli’s jewelry business, and Lavanya started to take care of e-commerce and private labels.

Although their core business hasn’t changed, Lavanya noticed people buying only silk sarees and not going to look at other collections. Besides, younger women left the shop without buying anything. To cater to the tastes of contemporary women, she founded Nalli Next, a sub-brand in 2007 with stores in Chennai, Bangalore, and Mumbai. This proved to be the right decision as it presented people with designer collections and dresses that Nalli Silks did not offer.

The Nalli brand was started by Lavanya Nalli’s great-great-grandfather and saw immediate success. She became the first woman from the Nalli family to take the lead and started a sub-brand that doubled the company’s business.

In the early morning of August 5, 1888, Bertha Benz became the first person in the world to go on a long-distance journey on an early automobile. She traveled 106 kilometers in 12 hours to her parent’s house. More than being one of the first test drivers of an automobile, she was a pioneer in her own right, determined, and resourceful.

In 1886, Bertha’s husband Carl Benz, a German engineer was awarded the patent for the world’s first gasoline-powered cart. It was Bertha who believed in the potential of the automobile. When her husband expressed his desire to further work on a working model, she poured her family inheritance into her husband’s invention and developed the first three prototypes. She tested the vehicles and troubleshot the vehicles’ different systems along with her husband in their workshop.

Though Carl was happy tinkering on it in their workshop, Bertha proposed they travel long distances to learn of its flaws. Her husband did not agree as he thought the vehicle was not perfect for a long drive. There were no fuel stations back then. She kept rigorously resting it for flaws around their workshop. One day, she planned a route where she could take her car. She picked a route with pharmacies that stocked a cleaning solvent called Ligroin to use as fuel.

On the way, she insulated a spark plug, used a leather pad as a brake (maybe the first usage of car brake pad), fixed the fuel injection system, and innovated many things. Bertha was not only involved in the demonstration process, but she took the car out and diagnosed the problems that were not evident in earlier tests at the workshop, and solved them. Despite challenges, she and her children reached their destination safely.

While the world is on a cusp of a revolution with autonomous cars today, during Bertha Benz’s time, the world was on the cusp of mobility itself. Though her husband started the trend of building automobiles that ran on gasoline, she took the lead, innovated further, started the current automobile industry by perfecting the automobile’s design, and showing people that they could travel long distances using an automobile.

Watch this incredible video ad made about Bertha Benz’s voyage by Mercedes Benz.

The General Electric Company had a legendary start with Thomas Edison, manufacturing dynamos and light bulbs, electricity-related components, and electricity distribution. They later got into aircraft engines, energy, wind turbines, finance, and now healthcare and software. In 1981, a man named Jack Welch became its CEO, inheriting a company that was riddled with bureaucracy.

As soon as he got appointed as CEO, he got rid of bureaucracy immediately, made the processes lean, tried to eliminate red-tape, and got rid of non-performing employees which earned him the nickname ‘Neutron Jack,’ named after a bomb that could eliminate people leaving the building intact. During his time, GE also sold off and divested from many businesses. Despite putting cash into GE’s account, he argued that they had to get out of those businesses as they were yesteryears businesses.

He downsized the workforce, made business units entrepreneurial, and made the company lean and competitive. He pushed the company aggressively into financial services, strengthened hi-tech with jet engines, software, and bought many businesses and got into manufacturing medical equipment. He introduced meritocracy where every employee was ranked based on performance.

Non-performers had to be told early than later that they needed to step on the gas. He freed managers so that they can help their teams innovate and create value. Jack wanted people to think on their feet. The bottom 10% had to ‘shape or ship out.’ To improve efficiency and performance, Welsch championed Six Sigma, a statistical quality-control system to reduce product defects.

Jack argued that the business style the whole world was practicing is an inheritance from the WW2 era, a  military-style, long chain of command. With a belief that e-business is the technology of the future, he helped GE make its transition into digital. When he retired in 2001, Fortune named him the “Manager of the Century.” Managers and CEO emulated his methods in their workplaces.

GE was started because of a visionary. After half a decade in business, it was included in the Fortune 500. Though it grew to be bureaucratic, people still called it the best business they knew. Jack Welch took the lead and started the transformation of a giant business conglomerate lasting two decades and made a great company greater.