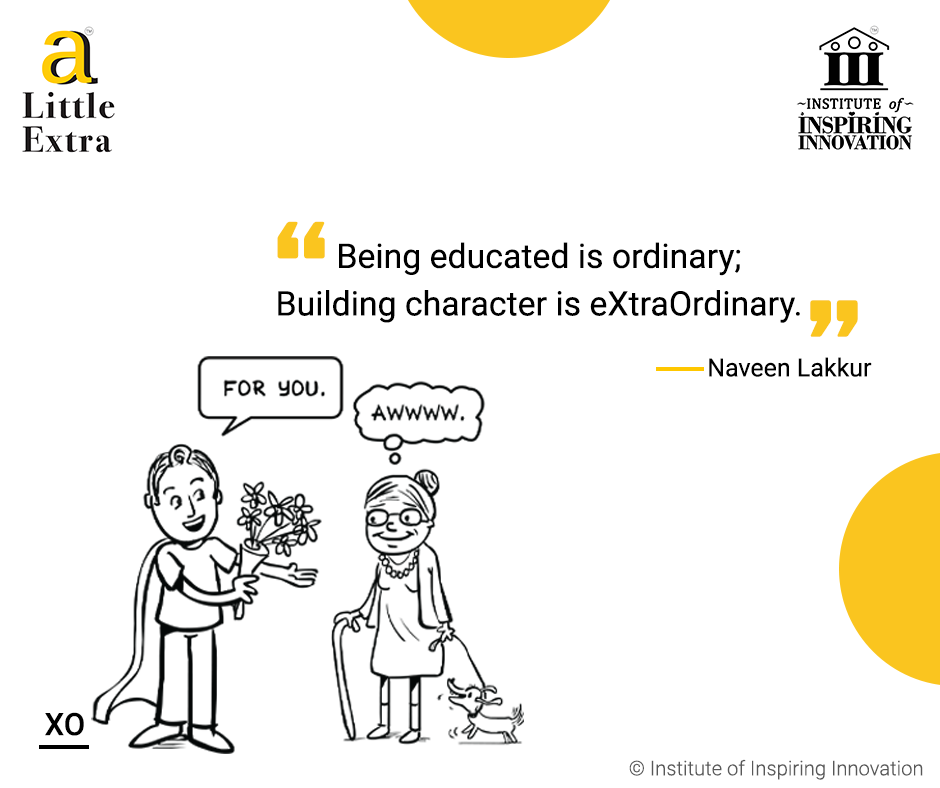 “Being educated is ordinary; Building character is extraordinary.” – Naveen Lakkur

Education is important without a doubt. Typically, people get an education to seek jobs and excel in their careers. That is what the need for education has become in the recent past. Now, it’s just a tool to only get jobs. Education is not just about learning. Along with the current learning methods of the subjects, Education should be ‘a Little Extra™ which helps you shape your thinking, shape your behavior, shape your actions.

If our question is how do we make education a stepping stone to shape our character, here are 3 ways:

Once the character is shaped, it has the power to attract many new things including name and fame. They all happen because of the character and not the other way round.

Generally, people attribute education to learning by reading books. While education is just not about reading books, that is how we have grown up, unfortunately not recognizing other forms or modes which exist. There are many forms of education. You can learn by watching or listening too. You can learn by committing a mistake, learn literally through experience. Everybody is getting educated and not just the one who reads takes exams and scores well. One form of education with phenomenal retention value is in storytelling. In fact, stories have shaped characters of people.

Watch this special video made by Tom Foolery to teach children about what the virus has taught humankind. An example during challenging times demonstrating the power of stories that not only played a role to educate the person, it also has the potential to shape the person’s character.

‘Mahabharat’ is another example, a classic one. What Lord Krishna offers to Arjuna in the form of Bhagavad Gita is the education of life. While he was educating, Krishna demonstrated a Little Extra by also giving all the sutras/guidelines, the elements that shape the character. ‘Bhagavad Gita’ is an example of a full-fledged methodology and framework, the protocol which could shape the character.

It has beautifully narrated a story and through the story, the form has educated Arjuna and billions of people who came after him. It is done through writing, stage shows, movies, and through different other ways to feed into our minds, for us to be educated, to shape our character, to live as a human being.

Reading the Bhagavad Gita will make you well-read. Following and living those principles would shape the character. That’s the distinction, a Little Extra. Arjuna became the selected student, he was not only the one who got educated, he realized that he was just a chosen instrument to play a role in the divine play and went on to be a Little Extra to make the whole education available for everybody. Bhagavad Gita provides education and If we can follow the teachings, it shapes up our character.

Story 2 – A doctor who is an embodiment of compassion

Education in the medical fraternity means undergoing plenty of training, long hours of study, and years of research to keep abreast of recent developments. Their training does not only happen between wanting to get into a medical institution to qualify as a graduate, but it happens lifelong. Their education will never stop. Though human anatomy has not changed, technology advancements and new revelations from the research has made the medical fraternity to continually improve and educate themselves.

Dr. Devi Shetty is a cardiac surgeon who got an education in England. He was practicing there. He understood what it means to serve and touch the hearts of millions, literally, and heal it. Later while practicing in India, one of his memorable moments was when he was called onsite to look at a patient. He said he would not be able to come onsite and it is better if the patient comes to the hospital so that the patient has all the support systems.

They said it would be nice if he came and saw the patient. And the caller said, “you will not regret and you will be happy that you came”.  They finally made him go to the patient. He went to the patient and then learned that the patient was none other than Mother Teresa. He only knew about Mother Teresa, but now he had a first-hand experience of what it means to be ‘compassionate’. He served as her personal physician for many years. In the field of medicine, ‘compassion’ is such a big lesson.

He was happy that he went. He said whatever doctors can do, they should. He tried new things. He was an early member to adopt technology in scale. ISRO provided satellite links for patients living in the Africa region. Through the satellite link, Dr. Devi Shetty and the team could help doctors on the ground. This was one of the first practical use of telemedicine.

Doctors want to heal the world and remove the pain that people are going through. That is the main reason people become doctors. Do you call a doctor educated because they have gone through the five-years of MBBS education after school? Dr. Devi Shetty is an example and embodiment of compassion. Education is what you got out of your learning. If you be a Little Extra and make a dedication as a companion to your education such that it will help others and remove their pain, that shows and shapes the character.

Story 3 – The ‘rising star’ of healthcare

Telemedicine is an extension of medicine, born out of education and technology. Dr. Sanjay Sharma is the treasurer and joint secretary of the Telemedicine Society of India. He is a well-known doctor in his specialty and has won many awards. He is also a theater artist and I love the way he creatively expresses ideas. He has used this ability and has worked towards making medicine to be available to people who cannot travel or have limited access to India.

Then now during the recent COVID pandemic, when the world recognized that telemedicine is a big requirement, the Govt. of India also felt the need for it. It went on to approve it and has launched guidelines. India today is among the top 10 markets for telemedicine. By 2025, the telemedicine industry is set to become a US$5.4 market.

Dr. Sanjay Sharma has over 16 years of experience in providing health care for the masses. After completing his Masters in General Surgery from the Rajiv Gandhi University of Health Sciences, Karnataka he pursued his Ph.D. in Ayurveda from the University of Pune. He is also an alumnus of the Indian Institute of Management, (IIM) Bangalore, and University of California, Berkeley. He is trained in Podiatric Surgery at Banner Hosptial, University of Arizona. He has also completed his MDP programs in Health Management / Hospital Administration from IIM Ahmedabad and AIIMS – New Delhi.

Wow, that’s a lot of education! Now, let me share his little extras…about what he does.

He is the Founder of APTA FootSecure, Co-founder of Yostra Labs Pvt. Ltd. and Vital Sense Pvt. Ltd. He also contributes the majority of his time as Chief Medical Officer of Noora Health. His portfolio companies are MediKnit, PeopleHealth, Neurosynaptic Communications. Presently, he is the Treasurer & Joint Secretary of Telemedicine Society of India; Joint Secretary of Indian Podiatry Association, Mentor at NSRCEL, IIMB.

In December 2019, Sanjay was felicitated as the “Rising Star” in the Times Healthcare Achievers Awards, instituted by the Times Group and Govt. of Karnataka.

I think we get a fair idea about what it takes to build the character.

Lovely examples of living characters..Actions and purpose is important to add eternal value to the education acquired by an individual.