Being the Change is eXtraOrdinary 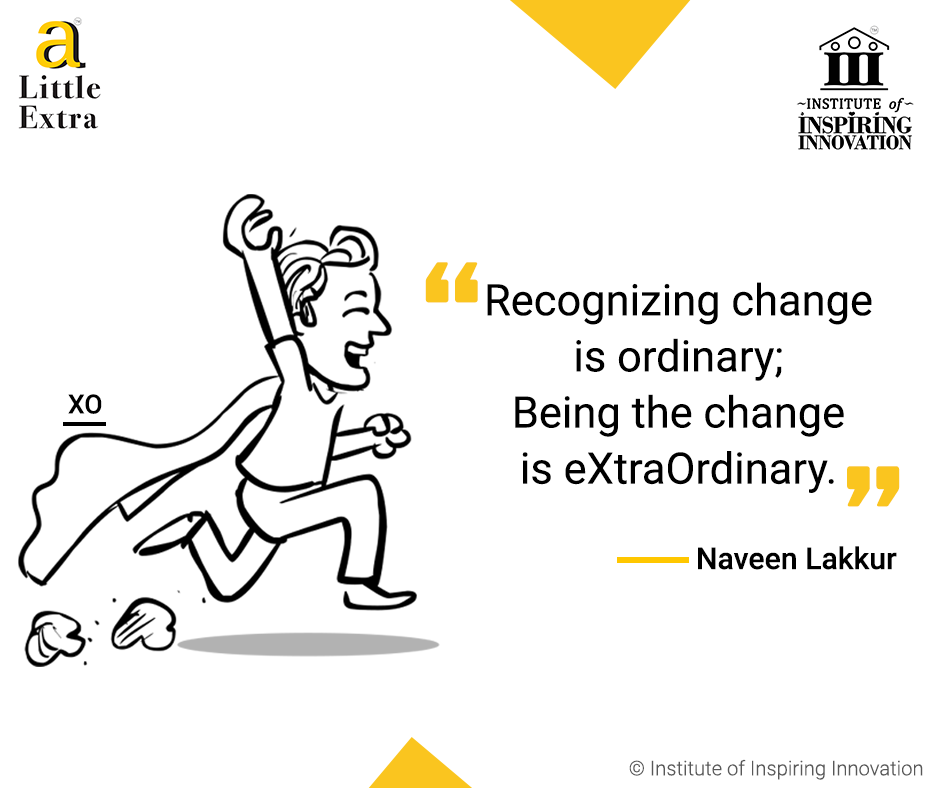 “Recognizing change is ordinary; Being the change is eXtraOrdinary.” – Naveen Lakkur

Change is constant they say. Most people recognize the change when it happens. Some people who are audacious enough to be the change or be part of the change, are in fact eXtraOrdinary.

Most people know Oprah Winfrey. For the 30 odd years that she had been in the entertainment industry, she not only raked in billions of dollars to add to her net worth, she has also touched millions of lives. She had a difficult beginning that included sexual abuse, weight problems, and racism. However, she has never let those get in her way.

But Oprah persevered, went through high school as an honors student, earned a Fullbright scholarship to college, and worked her way through television. Her media empire includes a monthly magazine, a TV network, a satellite radio channel, and much more. While most talk show hosts stayed away from movies, she has been in movies and has been nominated for awards.

Before she chose to be in media, Amerian television did not have talk shows that asked difficult questions. Oprah was innovative and was interested in what was the most difficult. She spoke to her guests like she spoke to a child and often got to the emotional core. People who came to her studio or who watched her on television became one with her. Whenever she talked, people listened, because they believed it could change their life.

Her support to Obama is said to be pivotal for the latter’s victory. During the late 80s and early 90s, when people recognized the change in television and the American culture, where sensationalism ruled the roost, she wanted to be the change that people were looking for.

She played her innovation card well, went on to be a Little Extra, found therapeutic and inspiring themes in her talk shows, and her magazine. She helped people find their best selves. Oprah has taught people to accept other people that are not like them. While America recognized that women were a force to be reckoned in politics, entertainment, business, and other fields, Oprah was already teaching women to think, talk, study, exercise, and be leaders.

One of the most powerful women in history, Oprah has been a Little Extra to put her talent, effort, and money for being the change for thousands of people to benefit the disadvantaged and uplift thousands which make her an eXtraOrdinary individual.

Story 2 – Big Corporations Contribute by Being the Change

When the COVID-19 pandemic was sweeping across the world, some of the hardest-hit countries had to take drastic measures to fight the pandemic. When the virus entered India, on one side, people had to consider lockdown being planned by the government. Companies were shutting their offices and were asking their employees to go home and continue working remotely.

While everybody recognized that this virus would bring a change in lifestyle, the infected people could have their lungs affected and they would have difficulty breathing. So, ventilators would be needed in a large quantity considering India’s population density. India needed to prepare and the whole world would need a lot of ventilators.

One of them who recognized this change was Anand Mahindra. While every large company was shutting their factories, Anand Mahindra saw the requirement and the need for change. He said that Mahindra’s factory that manufactures tractors would repurpose and make ventilators. His people figured out that the majority of the components that are used for vehicle manufacturing could be used to make ventilators or the majority of the parts required for ventilators are available in their manufacturing process.

They chose to produce ventilators to help the government’s efforts. Anand Mahindra demonstrated that being the change is extraordinary. He went on to be a Little Extra and started manufacturing ventilators which were a necessary innovation. As ventilators fell under ‘essential services’, he also got the government’s permission to keep their factory operational creating an opportunity for their employees to be productive meaningfully.

The Mahindra Group was able to repurpose their manufacturing process to make something useful. While there is no change in leveraging on the capital and the process, producing a product their company was not into was an innovation. He also gave up 100% of his salary to the cause.

Halfway around the world, the situation in the USA was not good. The virus was infecting people in high-density cities like New York. Telsa also got to work to design a ventilator. The ventilators are being designed in such a way that they can use a maximum number of tools they already have. Elon Musk was able to not just recognize the change, but he and his team went to be a Little Extra and said that they will manufacture ventilators that are required there.

Their little Extra was their design team which could design a ventilator that could make maximum utilization of the components that they already have been very comfortable using. Some people in Anand Mahindra’s company could help with industrialization with manufacturing and supply components now they are also relevant. They are feeling happy that they can contribute during these challenging times and contribute meaningfully.