Being good is eXtraOrdinary 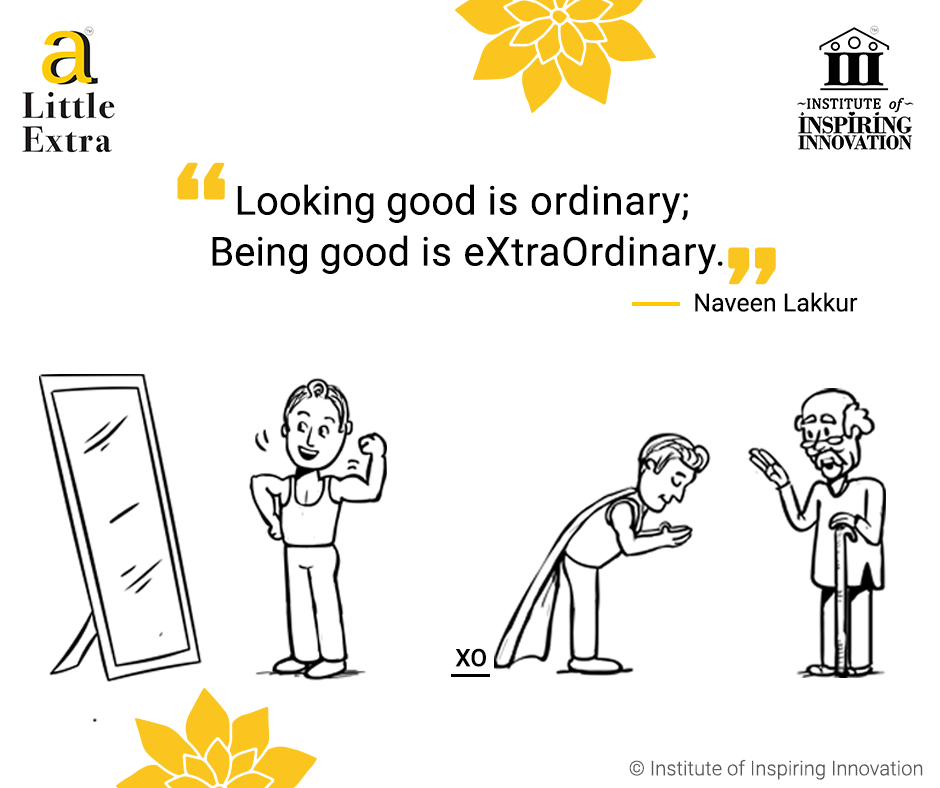 “Looking good is ordinary; Being good is eXtraOrdinary.” – Naveen Lakkur

We all make sure to look presentable and maintain visual appeal. Looking good will help you make a great first impression. It could influence how people will look at you as a colleague, engage with you, letting you achieve great results. It also imbues a sense of responsibility also. It shows how responsible you are.

However, some people go ‘a Little Extra™’ and show an extra responsibility of being good and doing good work. Such people are not only respected but revered. These are the people who society turn to for inspiration and advice. This characteristic can be displayed by individuals and companies alike. Let’s see some examples.

Story 1 – A Foundation for Doing Good

Sudha Murthy is an author, entrepreneur, philanthropist, and social thinker. She is currently the Chairperson of the Infosys Foundation, an arm of Infosys Limited. The story of Infosys, the Indian IT behemoth is legendary. In fact, her husband and Chairman Emeritus at Infosys Limited started the company with a loan of ₹10,000 from Sudha Murthy in 1981.

Sudha Murthy is a voracious reader; throughout her writing career, she wrote novels, travelogues, and non-fiction books. It was her love for books that brought Narayan Murthy and her together. Stories about her days that led to their wedding give us the impression that they were sharp in their appearance. Sudha Murthy told her parents of her interest to marry Narayan Murthy. Mr. Murthy showed up at the family home wearing a bright red shirt.

Though that did not deter her father from his dislike of Narayan Murthy, he eventually agreed after Mr. Murthy got a job. After working in Patni Computers (Capgemini today) for some time, he started the software consulting firm with an intention to create good quality software. Sudha Murthy lent a hand in writing software programs initially. However, she had to step off the Infosys team and the board to look after her young kids, only to be involved in various charities later on. A movie lover, she also had a chance to appear in a Marathi and a Kannada movie.

Sudha Murthy, though she is one of the richest women in India, continues to not wear fancy attire and expensive jewelry, giving a whole new meaning to materialism. She does not indulge in elaborate social gatherings. In her own words, most of her personal investment is in books. She wears cotton sarees which does not give her the appearance of a businesswoman, but her deeds carry more weight just like two British women found out.

Though Mr. Murthy had an inkling to be a social worker, it was Sudha Murthy who got into social work by starting various NGOs. In 1996, she started the Infosys Foundation. Through Infosys Foundation, she supports the underprivileged sections of society, supporting rural development, healthcare, education, and the arts and culture. In the USA, the Foundation supports community building, science, technology, and engineering. A mind-boggling fact is that they have established 70,000 libraries throughout the world.

She is a proponent of social entrepreneurship and encourages young people to innovate to create cost-effective, inclusive, and sustainable solutions. The Foundation also started the Aarohan Social Innovation Awards to recognize individuals, teams, and NGOs with innovative solutions to support the underprivileged in India. She has become an inspiration for women and men of all ages. She is one of the prime and living examples of a Little Extra to go beyond ‘looking good’ to ‘being good’. Watch her story.

Story 2 – Impacting the Food Industry by Being Good

Kellog’s corn flakes come in a nice pack. Despite the choice in flavor, the original cornflake recipe is the most sought for. The contents of the pack need to be dumped into a bowl, milk must be poured into the bowl and then eaten. Kellogg’s company banked on sustainable practices right from the start. Even 100 years ago, the packaging had to look good for the company to attract people to the product.

They used recycled content to make the boxes back then. But, they also had to be good for people to keep coming back to them. Though the product is bland in its taste, it can be eaten as a breakfast or as a snack in the evening.

During the colonial period, American working-class people ate left-over porridge from last night for breakfast. As America got wealthier, their breakfast became heavier and the expenditure got higher. Beef and pork meals became commonplace, especially in rural areas. During the early 20th century, Americans were indulging in a heavy breakfast consisting of steak and eggs, hash, sausage and bacon, flapjacks, among others.

With rapid industrialization and urbanization, the nature of work changed. They had fixed schedules of work, leaving less time for food preparation and consumption. Besides, a heavy diet caused digestive problems, and contracting tuberculosis was common at that time. Men and women needed convenience, a breakfast that could be fixed at a quicker pace.

American doctor and nutritionist John Harvey Kellogg thought breakfast should be light on the stomach. He led the new movement of clean living. He focused on getting people to give up fatty foods that were greasy, salty, and spicy. His Adventist principles got him to invent corn flakes, a twice-baked mixture of flour, oats, and cornmeal at high temperatures. The end result is then smashed to pieces before serving.

After Dr. Kellogg founded the Kellogg’s company, many of them, including one of his patients, copied him. Some factories sprang up near Kellogg’s factory. While most companies coated their product with sugar, Kellogg’s refused to do so. The other companies started to get popular and rich.

Undeterred, he spent money on advertisement and left a mark on the clean food industry. In 2018, Kellogg’s announced that they will work towards 100% recyclable, reusable or compostable packaging by 2025 to leave a smaller environmental footprint. The Kellogg’s company made a mark in the healthy food category by looking good and being good.

Story 3 – The Epitome of Being Good

In 1926, in a small town called Puttaparthi, a boy named Sathyanarayana Raju was born. By the time he was 14, he told the world that he was the reincarnation of the Sai Baba of Shirdi. This was reinforced with many miracles like manifesting the vibhuti (the sacred ash), rings, necklaces, and watches. People with ailments and diseases reported that they were healed by the Baba. Soon he had a huge following and people came to get a glimpse of Sathya Sai Baba.

The fact that overshadowed Baba’s divine power was his message and social commitment. Very early in his life, he stressed upon truth, moral, conduct, love, and non-violence, which are the five pillars of humanity. While he did not follow a particular faith, he was welcoming people of all faiths and creeds.

The Sathya Sai Organisation that he established, with a belief of delivering relief and service to the poor for free of cost, undertakes activities as a means to spiritual advancement. He founded schools, hospitals, ashrams, drinking water projects, and also a university. One of the two super-specialty hospitals is in Whitefield, Bangalore. It is a tertiary care institution that specializes in Neurology and Neurosurgery, Cardiology, Cardiothoracic, and Vascular Surgery.

Known as the ‘temple of healing’, the hospital is inside a huge establishment painted in snow white within 53 acres of land. The cost of building the hospital was upwards of Rs. 2000 million when it was inaugurated in 2001. The hospital was complete with surgical units, intensive care units, and emergency visits. The hospital can be accessed by people of any religion, caste, and creed. The information system inside the hospital is easy to understand and the friendly staff is always happy to help and many of them volunteer.

Over the years, it has also got into research and academics. Deserving students can study medicine at free of cost. It is one of the few hospitals that has integrated IT into the healthcare delivery process. A surprising fact is that all the treatments are available for free. While the healthcare costs during current times are out of reach for many and when multispeciality hospitals that charge a fortune.

Sathya Sai Superspeciality Hospitals do not have a billing counter. There is no sign of a hundi (donation box) anywhere. Some permanent staff receives their salaries through donations from unsolicited sources. As they do not solicit funds, people who would wish to make donations need to really put in a little extra effort to figure out ways to donate.

The doctors who wish to work here for free must apply. It is not surprising that the best of the doctors wait a long time for a chance to perform a surgery or two as their contribution in this mega service mission. People who work there believe in ‘Seva’ or service. While the hospital itself is large and beautiful making it ‘look good’, it’s actually their culture, attitude, and approach to serving the needy that takes it to a new level of ‘being good’. A good reason why it’s called ‘Temple of Healing’. Watch the video.