Being adventurous is eXtraOrdinary. 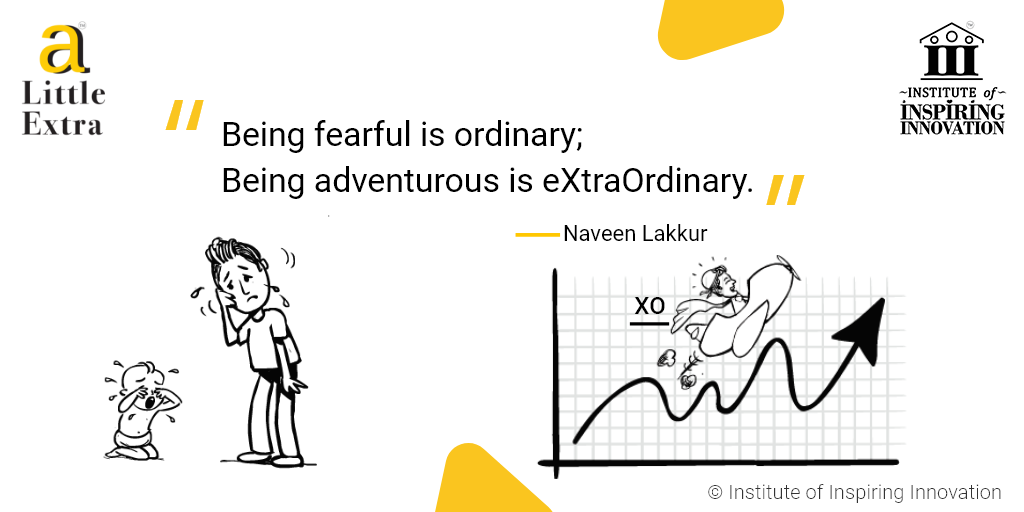 “Being fearful is ordinary; Being adventurous is eXtraOrdinary.” – Naveen Lakkur

Most people operate in fear. Fear of the unknown, fear of trying, fear of failure, fear of finding out the truth, and other fears that keep them grounded. These are some of the fears that keep people from starting companies, trying a new project, or getting into a commitment.

On the other hand, some people have discovered that when you go a Little Extra and want to do good things for yourself and for others, you cannot build a fence around you. You have to step out into the unknown if you want to reap the rewards.

Whether you win or lose while trying to be adventurous, you learn a lesson. You will find it worth being adventurous, provided you try. Let us dive in and learn about some adventurous people.

Known for being a risk-taker in his personal and professional lives, Richard Branson is synonymous with adventure in both his business and personal life. When he was relaxing at his Necker Islands, an American woman named Shannon Smith tweeted to him that ‘she would like to spend a day in his shoes.’

Without hesitation, he took off his shoes and mailed them to her challenging her to wear it an entire day. Shannon wore it while volunteering at a homeless shelter and shared her story on social media. Impressed, Branson had a hashtag #shoethon created and donated a small amount to the shelter every time someone used that hashtag. It made a difference in people’s lives, including Shannon, who literally walked in his shoes.

He inspired others with his initiatives turning out to be global movements. His entrepreneurial projects began with music but diversified into health clubs, space, airline, media, and others. His holding company, Virgin Group, controls more than 400 companies in more than 30 countries. Some of his big companies include Virgin Media, Virgin Money, Virgin Trains, and Virgin Atlantic.

We all know about his successes. However, he had his fair share of business failures. Some of his failed adventures are Virgin Cola, Virgin Cosmetics, Virgin Brides, Virgin Clothing, Virgin Cars, Virginware, and Virgin Megastore. He also stepped into high-stake businesses such as his low-cost airline Virgin Express to take on Europe’s low-cost goliaths but lost.

He then took on Apple iPod and iTunes with Virgin Pulse and Virgin Digital but could not keep up with customer pulse. Virgin Games, the Virgin Lottery, and VirginStudent, a social networking community, also failed. Despite failures, he continued to adventure on and still does.

His notable success came with his wish to explore space with The Spaceship Company, part of Virgin Galactic. Virgin Galactic’s SpaceShipTwo (SS2) that can accommodate six passengers and two pilots, successfully made its first test flight along with an atmospheric re-entry in 2018, keeping his wish to take people on a galactic jaunt alive. When he was still new into starting Virgin Atlantic, his mentor Sir Richard Hadlee, a British airline pioneer, had advised him to promote his brand on his own instead of wasting advertising dollars.

Branson uses his adrenaline-filled adventures to break the world record as an excellent source of free advertising and brand marketing of Virgin Group. For example, when he completed the cross-Atlantic hot air balloon ride, he had the Virgin Group’s giant red color logo painted on the balloon’s top part.

He is also a committed philanthropist, having started his first charity, “Student Valley Centre,” when he was 17. He also throws challenges through his philanthropist initiatives, creating an adventure for others. He has gone a Little Extra and announced that he will offer a GBP 25 million prize to the first person to propose an economically viable solution to the greenhouse gas issue.

His perseverance, relentless efforts, adventurous attitude, and constant effort at self-discovery lead to both success and failure, providing him with an opportunity to learn and go on an adventure again.

Formula 1 is the only sport where the human is only half the athlete, while the other half is the vehicle, a powerful second half. The components, parts and the crew must be strategically placed and be available at the right time for the cars (teams) to perform at the highest level. It is logistically challenging, not to mention the challenges in engineering and driver and crew health.

We see a smoothly-conducted race. It is an adventure for the drivers, engineers, and the racing teams’ crew. In hindsight, the most important are the drivers whose training would have started during the offseason. The drivers train rigorously to strengthen themselves. A lot of work goes into their back and neck muscles several times a week. The F1 drivers have the strongest neck muscles in all motorsports, vital to their survival in turns that they take at ‘breakneck’ speeds.

The formula 1 car is a complex machine where the team’s factory works year-round to improve every part of the vehicle from the front wing to the rear wing, the side-pods to the diffuser, and the suspension. But without the engineering behind the logistics, the Formula 1 races cannot happen. Some fans buy tickets, get visas and flight passes to follow their favorite racing teams worldwide, and watch the race at the venue.

But, it seems like the racing teams get to the venue first. In between all the engineering improvements in the cars, there is a dance between logistics and engineering during the racing season when the teams must compete and make money to pay for logistics, improvements, and others. There are 21 races in five continents within a racing season with a gap of a week between events.

This means all the teams must repeat their magic 21 times, an adventure that only a few expert engineers, drivers, logistics, and assembly crew get to partake in. Transportation from the airport to the race venue is done using giant long trucks. The convoy of giant long trucks can carry an entire structure called motorhomes, which can be set up by the racing venue and cars and components.

The motorhomes are by no means small. They are three storey tall structures complete with offices, bars, and restaurants with a live kitchen that the crew can assemble within two days. The European leg of the race is comparatively the easiest due to roads connecting all the European countries.

With three drivers who take turns between driving and sleeping, the trucks drive around Europe and reach the venue on time. They only stop to refuel. After finishing their European leg of the race, they have to enter the UK through a choke point called the channel tunnel and still reach Silverstone’s venue on time. The most logistically challenging is the non-European races.

For example, in 2018, the Sakhir Grand Prix in Bahrain was held on April 8th, the Shanghai Grand Prix was held a week later on April 15th, which is four thousand miles away. Though Shanghai is five hours ahead of Sakhir, and the teams had five hours less time to do their work, everything was smooth. Yet, the crew shipped everything out of Sakhir on Sunday night, and by Thursday morning, every team made their offices operational in Shanghai with their crew’s help.

The team planned the transport months before. In January 2018, all the ten teams packed five sets of shipping containers containing office utilities and some elements of their garages. The five consignments of three containers each went to Melbourne in Australia, Sakhir in Bahrain, Shanghai in China, Baku in Azerbaijan, and Montreal in Canada.

As a ritual, the logistics team makes their teardown plan on Thursdays, three days before the race day. They begin to pack up on Sunday morning even before the race begins, starting with the spare parts that the engineering team cannot use in the middle of the race, like the engine. Fifteen minutes after the race ends, the crew packs the car after post-race inspection. The spares and components, including the vehicle, are put in priority pallets.

After they fill the pallets, the trucks drive them to the airport to prepare for the next flight. Even after eight hours of the end of the race, they pack other items on the race track, which goes on the next flight. The cars, parts, and other priority items arrive at the next destination by Monday morning and are on the race track by night. Early Tuesday morning, the logistics deliver freight into respective teams’ paddocks.

A Little Extra careful planning and execution of the practiced and experienced crew disassemble everything from one venue and put them together at the next venue, giving a show that people watch and enjoy live. All this adventure takes less than 60 hours.

Vineet Rai created an impact by being a venture capitalist for rural India. People thought investing in rural businesses was next to impossible, and the returns would be next to nothing. Yet, Vineet started investing in India’s distressed and challenging areas of low-income states, building enterprises, creating jobs, and lifting people out of poverty.

Vineet’s social impact journey started when he took a course on forestry at the Indian Institute of Forest Management, Bhopal. He joined Ballarpur Industries and was posted at Odisha’s forests, where the company sourced its wood for its paper business. His attempt at finding a ‘safer’ job did not bear fruit, and he realized it was not exciting enough.

He then took up the CEO post at Grassroots Innovations Augmentation Network (Gian), an Ahmedabad-based incubator set up by the Gujarat government to help farmers convert their innovative ideas into businesses. One farmer created a downward tilting bullock cart allowing fertilizer to trickle down into the fields while tilting, otherwise a manual activity.

While he was working in a forest, he saw people starting a business to come out of poverty. During his learning phase, he worked with farmers to help them create products of value. He realized that to nurture innovation, a business requires an entrepreneur in the lead. Hence the risk-taking entrepreneur needs risk capital.

However, he could not convince the GIANs board about this idea. While working as a forester and a rural investor, he realized that his idea of investing and economics is ecological and sustainable. He went a Little Extra, pitched his idea and raised capital of SG$10,000 from Jungle Ventures and founded the Aavishkaar Group in September 2001, meaning innovation, thus starting an adventure in rural innovation and investing.

Aavishkaar promotes sustainable entrepreneurship and infuses cash into rural adventures to help people chase dreams of solving a problem. According to him, if India wants to become a $5 trillion economy, it needs to be inclusive, sustainable, and impactful. Vineet says the difference between Aavishkaar and traditional venture capital is that Aavishkaar will invest in areas where the startup ecosystem is underdeveloped or non-existent.

But infusing money was not enough. Vineet had to go a Little Extra by working closely with rural entrepreneurs to create value. At the same time, he started an intellectual capital for rural India called Intellecap. He brought in people to bring new ideas to rural businesses’ space and act as a bridge of entrepreneurs and people who wanted to invest capital in this segment.

Intellecap provided research and consultancy services to rural enterprises to help them scale. Some of the successful institutions Intellecap incubated were Utkarsh, Suryoday Micro Finance, and Grameen Koota. Today Intellecap advises across sectors and geographies, not just microfinance.

On the other hand, some of the successful investments by Aavishkaar include Rangsutra. This artisan collective supplies apparel to Fabindia, Equitas Microfinance, that went for an IPO in 2016, among others. Other sectors that received backing include agriculture, energy, healthcare, and education.

The firm has created an ecosystem under the Aavishkaar Venture Management Services. IntelleGrow provides venture debt, IntelleCash meets working capital and business loan of SMEs, and Arohan caters to microfinance borrowers. The Aavishkaar-Intellcap group manages assets valued at $590 million and saw 24 exits, giving their investors a return of 3.1 times.