An aspiration with values is eXtraOrdinary 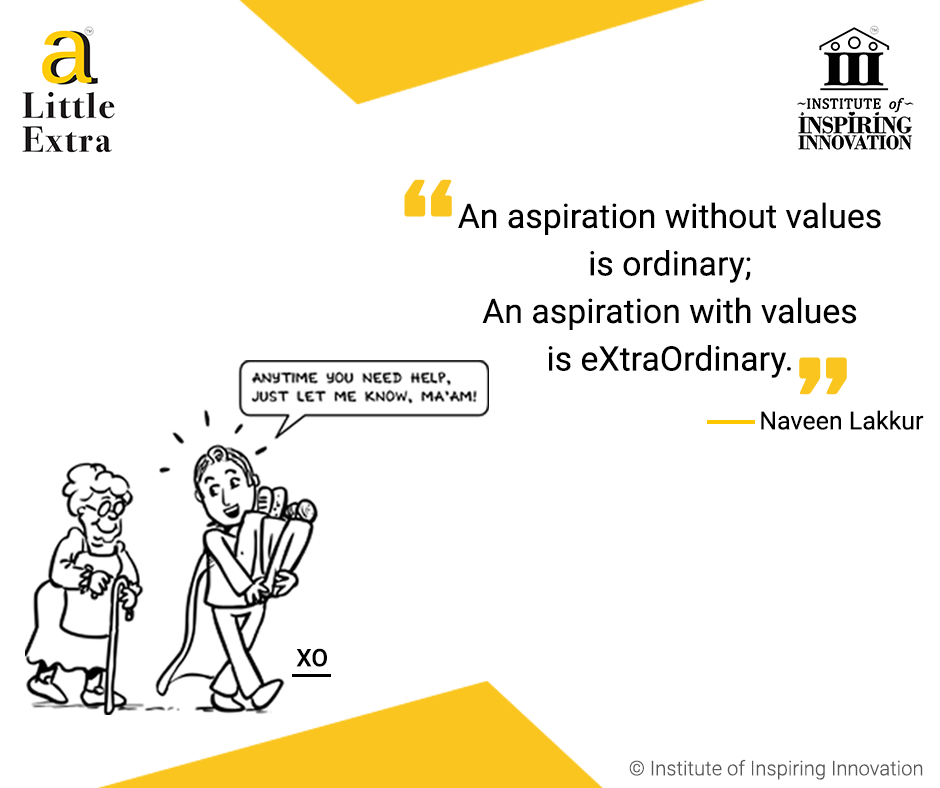 We all aspire to be a better version of ourselves than what we are now. Having good values is impactful to the inner self, and the values you have are the foundation of your character. Without values, your aspiration is faceless and tasteless. Aspiring to be a better version of yourself or create something that makes someone’s life better with certain defined values is eXtraOrdinary.

Entrepreneurs are a classic example for ‘Aspiration’ and few know how to make ‘Values’ as their little extra which enables them to build eXtraOrdinary companies, here are some examples for aspirations along with a Little Extra Values.

A Confederation of Indian Industry (CII) report says that there are 116 million senior citizens (above 60 years) in India in 2020, which is 12% of the population. By 2030, the number will double, which will be 22% of the population then. Only 40% of senior citizens live in a joint family, while the rest of them live by themselves. Due to the changing social fabric in the country, most of them are finding it difficult to have someone cater to their lifestyle needs.

Adarsh Narahari is a young entrepreneur and a real estate developer. He aspired to give senior care a brand new identity. He observed seniors living alone with no one to care for them, mostly among the middle-class. With compassion and care at the core of his values, he went on to enrich the life of the seniors. He leveraged people, operations, convenience, and technology considering personal care, home management, and emergency services.

With a passion to create a space for senior citizens, the Managing Director of Mantri Primus Lifespaces Pvt. Ltd. decided that he will pioneer in conceptualizing and creating luxury communities for seniors in India. The project Mantri Primus in Bangalore, which is an innovation in senior care, provides a special ecosystem for seniors to help ease their aging process, and lead a healthy life while also pursuing their interests. With this, Priums is part of the new revolution of senior care and convenience.

His target market was seniors who are well-educated and retired professionals from the upper-middle class. Throughout the property, there are many innovative measures for safety, like grab bars in the bathrooms and lean bars in corridors. The elevators move smoothly with almost no jerking movements. The walking paths are rubberized and are kind to joints. Seniors who are living here participate in activities like yoga, meditation, swimming, gardening, and photography. There are also specially designed gyms and opportunities for social gatherings also.

Life for senior citizens in this property did not become difficult during the 2020 COVID-19 pandemic. In fact, the demand for Primus apartments went up because of the amenities it already had in place. Studies by the Chinese Centre for Disease Control and Prevention (CCDC) showed that seniors above the age of 80 had a fatality rate of 14.8%. The Association of Senior Living India (ASLI) has used the report and put in place a set of rules and regulations for senior citizens living in communities.

Incidentally, Adarsh Narahari is a member of the ASLI board. He in fact told the media recently that they have consulted with a geriatrician and have implemented the ASLI regulations at Primus. The staff who live in nearby villages on Kanakapura Road were using public transport to get here. However, during the lockdown, the company used rented shuttles to pick them up to work. They also had doctors talk to community members who passed on safety information to the seniors.

Watch Adarsh speak about holistic support and care for seniors. He seems to be a young entrepreneur with big aspirations to grow his business with Values as the guiding principles guiding in the right direction. Way to go…

Kabeer Biswas, an alumnus of the University of Mumbai, finished the sale of his location-based couponing startup, Hoppr to Hike in 2014. Sometime in July 2014, he started a WhatsApp group to fulfill hyperlocal delivery, mostly for his friends and acquaintances. Little did he know that his aspiration would become a valuable startup. He targeted the WhatsApp service towards people who forget to do certain things or those who do not enjoy a particular task.

The group which his friends used at the beginning, spread its existence to strangers who used the service to get tasks done like delivering groceries, exchange documents, getting a clock repaired, collecting laundry, binding a child’s notebook for a child, and many others.

In India getting things done using domestic help is not something new. People would even let their domestic help ‘keep the change.’ With a realization that people are willing to pay to get anything done conveniently, they started Dunzo, a hyperlocal delivery startup company. They created a robust partner app through which they engaged their delivery partners to fulfill deliveries.

Dunzo became an example of business model innovation. As orders began to grow, the consumer version was created in April of 2017 as WhatsApp was not scalable. The app was also simple to use. The user raises a task with instructions. The delivery executive (partner) is assigned the work. He/she carries out the task. The partner and the customer communicate using a chat interface. The Dunzo app became a hit with tech-savvy individuals.

Soon the success of the app attracted venture capital from Blume Ventures, Aspada, and angel investors. What was started as a hobby became one of the first Indian startups to receive funding from Google. They started their service in all the major Indian cities.

Being grounded with the values to serve, during the early 2020’s nationwide lockdown in India, Dunzo spoke to the authorities so that they could be part of the solution and help those who were affected by the lockdown. They focused on delivering only essentials like groceries and medicines. After arranging for passes for their delivery partners, the company continued operations.

The management also changed how they onboarded. Earlier, the interested individuals walked into the office with documents. During the lockdown, they onboarded remotely so that they employ social distancing and engage with people who were interested in delivering essentials.

This also changed their fortunes. There was a surge in orders for perishable goods like food and beverages. The company’s average order value increased by 4X. They also saw a spike in average ticket sales, savings per delivery increased, and there was an increase in orders fulfilled per hour. Watch Kabeer Biswas speak about how they worked during the lockdown.

People have equated banks to heartless corporations who employ questionable tactics to do business. They charge exorbitant fees for their services. Some banks are known to fund oil exploration and aid unsustainable projects. People who are in control of the banking system are said to be in control of how our money is used and ultimately, how we live.

Aspiration, a US-based innovative online financial firm, though not a chartered bank as of now, wants to change how people see the banking system and how banks operate. Their unique take on banking provides interest-bearing accounts with fee flexibility, with their “Pay what is Fair” slogan. They have also brought with them a socially and environmentally conscious twist.

With an aspiration to be environmentally sustainable, they operate neither branches nor ATMs. The customers’ deposits at one of their partner banks, which also offer FDIC insurance. It is trying to differentiate from the pack by focusing on no hidden fees, and making charitable donations to causes is at the core of its business model. They help customers save money while practicing environmental sustainability.

Some of the features of the account include zero-fee at domestic and foreign ATMs, earn a 1% annual interest rate on the entire balance, and 10% of the bank’s earnings will go to various charities including the environment. The “Plant Your Change” initiative rounds up debit card purchases to the nearest dollar and uses the change to plant trees. They give customers cashback for expenditure on products created by ethical companies.

This innovation in the financial sector has not gone unnoticed. Over the years, it has attracted a lot of press and also investors since its founding in 2013. Among the investors who have been drawn towards Aspiration’s mission are Hollywood actors Orlando Bloom and Leonardo DiCaprio, NBA coach Doc Rivers, philanthropic investment firm Omidyar Network, and other high profile people.

It has managed to rope in 1.5 million customers and is growing. Watch a review of this revolutionary institution and learn how with values aligned, you can earn customer trust and make the aspirations a reality.