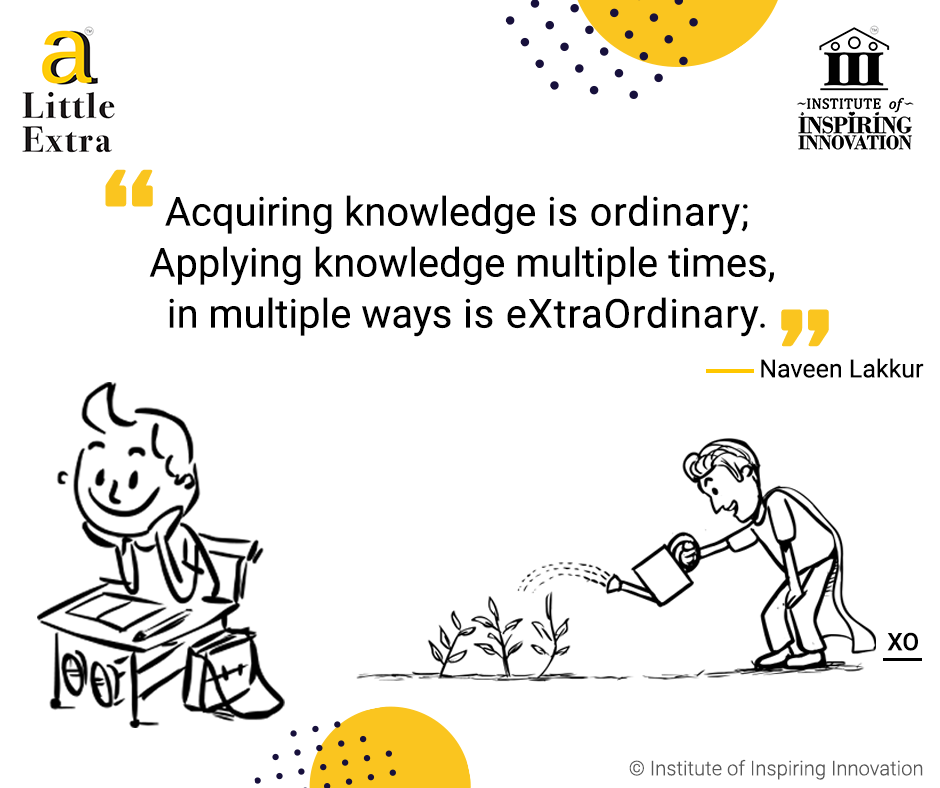 Education can change people’s lives. It can mold opinions and points of view on things. It is a means for people’s purpose in life. It also paves a way for people to find answers for questions they have, another means to acquire knowledge.

Some people not only acquire knowledge, but they apply their knowledge multiple times in their lives in multiple ways to create a new set of knowledge that can be accessed by future scientists and knowledge seekers, create a system that works for people, and useful tools and products that are not controlled by the market forces.

Below are examples of people or organizations that have made a difference by applying knowledge. Let us know them.

Story 1 – A Doorway to Sanitization

A brainchild of a visionary industrialist Jamsetji Tata, Indian Institute of Science (IISc) was established in 1909 in Bangalore with active support from the then Maharaja of Mysore Krishna Raja Wadiyar IV. One of the oldest research institutes in India, it was declared as an ‘Institute of Eminence’ by the Govt. of India in 2018 and it has been a deemed university since 1958.

The institute has helmed scientific studies, activities, and cutting-edge research in the country. It has collaborated with organizations like CSIR, ISRO, DRDO, and other universities on projects. They are also involved in discovery sharing, knowledge transfers, and cooperation with foreign universities. IISc professors have had good citations and h-index for their work.

Some of the famous names associated with the institute include J.C. Ghosh, C.N.R. Rao, Vikram Sarabhai, Homi Jehangir Baba, Satish Dhawan. Whenever a project is successful, they are dedicated for usage to the Indian public.

Their students and members are not only known for acquiring knowledge, but also for applying them in multiple ways. Even during the coronavirus pandemic, their research did not stop. With collaboration from in-house startups Papercats Creative Solutions Pvt. Ltd., founded by Gururaj Nayak and Srushti Engineering Innovations Pvt. Ltd., founded by former Aerospace Engineering professor K.J.P. Reddy, they developed an elaborate sanitization mechanism.

With thousands of Ph.D., M.Tech. and Integrated Ph.D. resident students set to return from their hometowns after the end of India’s lockdown, the ‘Dwaar’ tunnel will welcome them into the campus after the students are ensured a complete sanitization of the person and their luggage.

The individuals must approach the gate and place their luggage in the UV-based sanitization chamber, stretch their hands for the sensor-based hand sanitizer, then they must step into the tunnel. The first step doubles as a shoe sole sanitizer. When they wave their hand to open the door, a well-embedded thermal camera checks for temperature and displays it on a screen.

When the temperature is within the authorized levels, the person must step under the air blower, following a hand gesture to the door, the person can exit the tunnel. The person can collect their luggage and sanitize their hand again. This innovative machine is not only a complete sanitizer but also doubles as a surveillance mechanism too. It identifies the person.

It is contactless and the whole process takes less than 30 seconds. The simplistic design also ensures that the machine is attractive and the process is not cumbersome. I hope that they extend this machine to the public and make good on their principle of dedicating yet another innovative solution created by applying their knowledge in multiple ways. Watch the video.

Manual scavenging is one of the biggest problems in India. The Honorable Supreme Court of India has banned manual scavenging and also equated it to ‘sending people to gas chambers to die.’ Despite this, the practice has not stopped and people are forced to enter the pipes through the manholes to clean.

There are reports of scavengers dying on the job due to the lack of a proper solution. Besides this, when the manual scavengers go back home after work, they cannot use their own hands to eat their dinner despite thoroughly cleaning themselves.

In 2016, college classmates M.K. Vimal Govind, Arun George, Rashid K, and Nikhil N.P. from MES College of Engineering, Thiruvananthapuram in Kerala decided to apply their knowledge to end the problem. With a mission to relieve the manual scavengers who risk their lives by getting down to the manhole without any protective gear to unclog drains.

They founded GenRobotics to create a solution. The solution came in the form of a robot. Despite the founders and their team taking up other jobs post the completion of their engineering program, the team came together at the insistence of the Kerala government to complete the creation of the machine. They raised money from the Kerala Startup Mission to work on the project.

It gave birth to the innovation named ‘Bandicoot’, powered by Artificial Intelligence. It is semi-automatic that can open the heavy manhole lids, go inside and mimic all the actions of a human scavenger. The control panel unit that can be controlled by a human, stays outside the manhole. The waterproof, night-vision camera transmits 4K resolution images in real-time to a screen at the control panel.

The arm is connected to an 18-liter capacity bucket to collect waste. The machine also has sensors to measure different environmental parameters, chemicals inside, and other materials. A product that was a school project became a device that can be used by city corporations.

These students used the knowledge they acquired and applied the knowledge in multiple ways to bring mechanics and AI together to create an innovative solution. Now, they are also in talks with the Govt. of India to bring this technology to the mainstream. Watch the video.

Story 3 – Changing How Payments Are Made

PayPal is a success story that changed online payments. The primary service it provides is fee-based processing of payments for online vendors, auction sites, and commercial users.

In 1998 Ken Howery, Luke Nosek, Max Levchinand Peter Thiel established Confinity with an aim to provide security software for financial transactions from a desktop or a mobile. At the same time, Elon Musk established X.com, an online banking company. In 2000, the two companies merged to become PayPal.

With Musk as the CEO and Peter Theil as Chairman, the management solved its own cash flow problems so that they can stay afloat. Back then, they had a competition with many companies springing up. The company got a boost when eBay acquired them in October 2002 as PayPal was the go-to payment platform for eBay users.

The company grew through mergers and acquisitions (M&A). Two of the major acquisitions were Fraud Science, a fraud management company, and BillMeLater, a credit company. Other acquisitions included Hyperwallet, Simility, GoPay, etc. It also had to enhance security after facing many cyber attacks too, by hiring top engineers to fix the problems.

Though the original founding members are not on the board anymore, PayPal reached 100 million active users around the world by 2010. While the process of creating a payments company needed knowledge acquisition and usage of the knowledge in making a platform that can be used in multiple ways, the original team used PayPal as a foundation to gain knowledge of creating and running million and billion-dollar entrepreneurial ventures.

Known as the ‘PayPal Mafia’ by the media, all the original founders went on to use their learnings in companies they founded multiple times in multiple ways. Elon Musk founded Tesla, Neuralink, SolarCity, and SpaceX that is bringing innovative solutions and disrupting the industry they are competing in. Engineers Steve Chen and Jawed Karim co-founded YouTube. In fact, Karim posted the first video.

Russel Simmons and Jeremy Stoppelman founded Yelp.com. Yishan Wong later became the CEO of Reddit. David Sachs founded Yammer. Peter Thiel was on the board of Facebook before founding the Thiel Foundation. He is today a well-known venture capitalist and philanthropist. Watch an informative video about the PayPal founders.

This is a story of Dr.Srikanth Sola.

Dr. Sola is a cardiologist with a strong science and research background. After graduating from Stanford University, he completed various aspects of his medical training at the University of Louisville, Harvard Medical School, Duke University, and Emory University. He is a former cardiologist at the Cleveland Clinic – which is widely reputed as one of the top institutions for heart care in the world.

Dr. Sola is a recipient of numerous awards and has been named “Who’s Who in America”, “Who’s Who in Science and Engineering”, and “One of America’s Best Cardiologists” by the Consumers Research Council. He has authored 50 research publications in peer-reviewed journals and numerous book chapters and serves on the editorial board of several international research journals in cardiology.

In 2008, Dr. Sola moved to India to serve his country. He joined the Department of Cardiology at the Sri Sathya Sai Institute of Higher Medical Sciences, Bangalore. Stunned by the high morbidity and mortality due to air pollution that he saw on a daily basis, Dr. Sola began evaluating existing technologies and developing new ones to improve ambient air quality. After many successes and failures, he developed a pulsed radio wave technology that was inspired by the cardiac ultrasound he performed on a daily basis. This was highly successful – so much so that Dr. Sola was compelled to leave the full-time practice of medicine to make this technology available to society on a wider basis.

With all his acquired knowledge he chose to be a little extra and start his entrepreneurial journey. Dr.Srikanth Sola is now a CEO, Inventor, & Co-founder at Devic Earth, a Bangalore-based green-tech company, creates innovative solutions to mitigating air, water, and soil pollution.

By using the technology he invented, he and his team got together to develop and launch a product by name ‘Pure-Skies’, state of the art air purifiers. The only air purifying system that is truly effective outdoors. In fact, this was deployed for the Airtel Delhi Half Marathon in 2018 and the impact was marvelous, the air quality was found to be improved by 54%. With this success story, Tata Steel Kolkata 24K chose to deploy the solution and the results were much better.

Their solution being deployed in several industries like JCB, ProCam International, FlowServe, and several more…it was observed that the sick leave of employees has gone down.

Hotels like Taj Palace New Delhi and few of the malls have chosen to use this product to create a better atmosphere for their customers and they have been successful in reaping the benefits of the innovation.

When the going was very good, the Covid-19 invasion happened, forcing all the industries, hotels, and malls to lockdown. Factories and offices are now reopening, only to close again because of coronavirus cases in their premises. The lockdown has been relaxed, but coronavirus has not.

During the Covid-19 lockdown times, Dr.Srikanth Sola and his team have been acquiring new knowledge. Studying about coronavirus, it’s properties with an understanding that the virus is not going to go away, anywhere, any soon, and establishing the need to co-live with it.

The team is putting a Little Extra effort to apply their knowledge and are now deploying their new range of products to contain the spread of coronavirus in industries, factories, and workplaces, creating a safer environment. This is an example depicting a case that acquiring knowledge is essential and application of it is what brings in results.