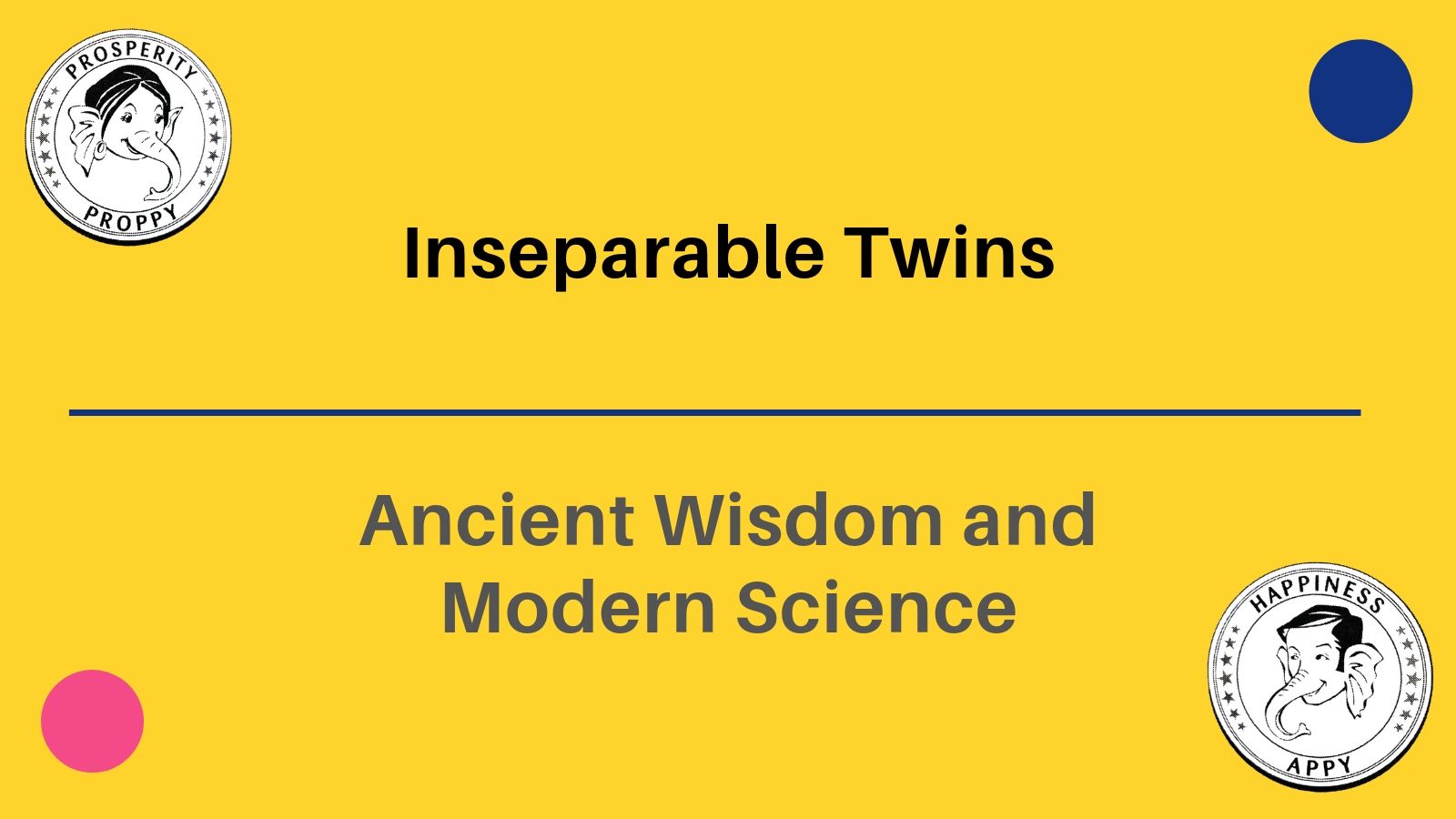 The brother and sister duo, Appy the male elephant, with a name synonymous with happiness and his twin sister Proppy, a name synonymous with prosperity, both as aspiring innovators decided to visit their human friend and a mentor Lucky, in his office in the city. By the time they reached the office, they were stressed out due to the stares they got from humans.

When they entered Lucky’s room, they found him sitting in the lotus position and meditating. A soothing hymn was playing on his computer. Lucky, who had finished meditating, opened his eyes and saw the two elephants at his door.

“Welcome, my favorite twins. What brings you to my office?” enquired Lucky.

“We had never been out this far into the city. We thought of trying it out today and came to visit you at your office,” said Appy.

“How do you like the city?” asked Lucky wiping his sweat off his brow and turning the volume down.

“Strange, because my friends told me people only drove cars, only tall buildings with no windows exist, and that people did not talk to each other,” said Proppy. “I was expecting to get my hands on the latest technology, but Appy discouraged me from doing so.”

With a shrug of his shoulders, Appy said, “On the contrary, we saw cows, dogs, and birds who I chatted with. I saw ancient temples where people wore vermillion paste on their foreheads and next to it were swanky offices, where only well-dressed people entered and exited, an eyesore next to the ancient edifices. I think humans should take it easy.”

“Says someone who used the Google Maps to find this place,” said Appy smiling. “Look Lucky she is still holding her smartphone.” Proppy rolled her eyes and put her phone in her handbag.

“But Lucky, it was such a shock for us to see this. But, I am afraid that old traditions will not put anyone in the fast track. We need to do away with old things, let it go, is it not?” asked Proppy.

Lucky smelled a debate brewing between the two and he decided to be a spectator for a while. He smiled and pointed towards Appy, hoping to hear his counterargument.

“It is the old and new that sustains a civilization. New cities are built on the ashes of the great cities of yesteryears,” said Appy while Proppy and their mentor Lucky nodded their heads.

Lucky’s face lit up as soon as Appy said that. “Ah! What a brilliant topic to talk about this morning. Ancient wisdom derived from saints, kings and scholars of the ancient cities versus modern science and technology that help cities run on autopilot,” said Lucky.

“Why should we talk about something that is ancient and defunct? Is ancient wisdom relevant anymore?” asked Proppy.

“You know Proppy,” Appy challenged, “I think we must not stay away from old school wisdom. We need it in these challenging times.”

“I would like to hear more from both of you,” said Lucky. I am sure we all will learn something today.”

“Our cup is empty,” said Appy for both of them while pointing at his head. The twins made their way to a sofa and made themselves comfortable.

Lucky shut down his computer and sat behind his desk. Appy continued, “though presumed original in ideas, modern science is largely rooted in ancient traditions. Scientists are always confronted by paradoxes, be it in astronomical, psychological or atomic realms. This is when they turn to Vedic, Greek, Islamic, or Asian thoughts. I think the usage of mythic, religious, philosophic, and scientific knowledge could illuminate current scientific investigations.”

“I do not think that ancient people were so well-informed as people are now,” said Proppy. “The knowledge modern humans have is unprecedented in history. They have found the circumference of Earth, the distance between the Milky Way and Andromeda. They have discovered many species of plants and animals. I have many other examples.”

“All this proves is that modern humans are knowledgeable and the future prospects for accumulating more knowledge seems bright. Ancient wisdom was confined to certain geographical boundaries and it could not spread like it does now with the help of internet. These days, technological innovations are advancing so rapidly that it makes us think that we have sped up time,” ended Proppy emphatically.

“However, technology took several centuries to advance. Ancient people had the opportunity to experiment and refine their techniques, which included spiritual healing,” said Appy.

“Maybe, but spirituality did not get us to Mars” said Proppy, rolling her eyes. “Lucky, please help us understand what we need now? Is it ancient knowledge or modern science?”

Lucky cleared his throat and said, “Well informed people became celebrities of the ancient world. Socrates, Pythagoras, Chanakya, and many others are part of this list. This is because they had the curiosity for knowledge, the desire to seek out the truth in the natural world. These people are still revered today for their teachings are still relevant to scientific and technological innovations and entrepreneurship.”

“I knew you would support the importance of ancient wisdom,” said Appy happily which made Proppy raise her eyebrows.

Lucky continued, “kings and scholars believed in the importance of knowledge and even funded people’s quest for knowledge, whether scientific or philosophical. Knowledge was considered so precious that some kings massacred whole communities to keep certain knowledge a secret or within a select few.”

The Roots of Modern Science

Proppy was stunned. After a minute of silence, she asked, “Must we use ancient wisdom as a tool to further modern science?”

“Actually yes. Though presumed to be original, modern science is rooted in ancient traditions and wisdom,” said Lucky. “What better examples than the current scientific interest in ancient practices in meditation and yoga? These ideas from ancient India have influenced modern medicine, science and psychotherapy.”

“So modern science is not reinventing anything?”

“I think he is saying it is wise to use ancient wisdom in modern science, Proppy,” said Appy.

Proppy asked with a disappointed look on her face, “Ok. What’s wrong with what we have achieved with modern science?”

Lucky said, “Modern technology has changed lives. It has given mankind a giant leap. However, there are problems. People cannot afford it or have no access to it, that includes most of the people in Asia and Africa, especially modern medicine.”

“Middle-class Americans cannot afford health insurance, Europeans have made it clear that they do not feel the need to depend on modern medicine. Prince Charles, the heir to the British throne once said, ‘ … that modern medicine, for all its breathtaking advances, is slightly off balance like the Tower of Pisa.’ We need ancient knowledge to fuel innovation in healthcare.”

“Using ancient knowledge in modern technologies? I am not sure how that works. Are there examples?” Proppy wanted to know more.

“There are many examples,” said Lucky. “I would like to say that ancient wisdom and modern science are two sides of the same coin. They are inseparable twins, like you two. There has been a lot of interest and research on yoga, the science of life, recently. It is believed to keep our mind, body, and spirit healthy. Research has found yoga to reduce anxiety, depression, and stress, and improve the health of the heart. Yoga’s positive impact extends down to the cellular level as studies say.”

In fact, the mat you see here is a classic example of Ancient Wisdom and Modern Science as Inseparable Twins. It’s called ‘YogiFi’. This mat is an artificial intelligence based wifi enabled yoga mat which helps people to practice yoga in an electronically assisted mode with Alexa talking to you, guiding you, correcting you, as if she is just there with you as a yoga expert. Let me use this computer to show you how this mat works, what people are saying about it and the number of recognition for its innovation. Let me click this link of ‘YogiFi’.

You will surely be inspired when you learn how YogiFi got evolved, let’s watch this video, an interview with Muralidhar Somisetty, Founder & CEO of Wellnesys.

“Another example is the practice of Pranayama which is also very beneficial to our well-being. The way we breathe impacts stress levels and lowers blood pressure. Research also says that meditation can have powerful physical and psychological effects.”

“Is this what you were doing when we came in?” asked Proppy.

“Yes. I have been practicing it for years,” replied Lucky. “It can help combat health issues. While there are short-term benefits, long-term benefits have also been documented. There have been reports of meditation giving you a sense of oneness.”

“Ancient humans had really figured it out for themselves,” said Proppy. “I think we elephants and humans are similar. Both of us believe in community, both of us give importance to eating healthy, and we meditate too.”

“Oh! I believe you! I would like to see you two meditate,” said an amused Lucky. “Hey, speaking of food, there are miracle foods that act as a cure for many illnesses. Turmeric is one such example. It is a flavorful spice and an antioxidant. It has always been used in religious ceremonies and in cuisines. It has healing properties, wards off indigestion, heartburn, lowers the risk of heart attack, and repairs brain stem cells.”

“There are ancient superfoods which are still consumed today. Even packaged food items have not kept these away from their manufacturing process. Ragi is an ancient grain, humble, but power-packed. Elite restaurants use it to make ragi tacos and packaged chips.”

“You may have heard how green tea is rich in antioxidants. Did you know superfood Amla has 20 times more Vitamin C than oranges? It is an immunity booster. You must try mixing it with your sugarcane juice.”

Lucky continued while the twins listened intently. “Another interesting thing is that ancient people used to store food, including the superfoods I mentioned in clay pots. The usage of clay has been promoted extensively these days. They are heat-resistant, and they, unlike plastic utensils, do not release toxins into the food while heating, which is perfect when you want to microwave your food.”

“Oh my, what a learning this has been,” said Proppy. “I will definitely read up more on superfoods in the community library at the lumber yard we work.”

“Well, we shall discuss other inseparable twins too,” said Lucky. “Please come home sometime, both of you. I will have ragi chapati with coconut chutney prepared for us, fifteen each for both of you!”

“We would like that,” said the twins in one voice. “We will take our leave now. We want to visit the temple with the elephant at the next street on our way.”

The discussion has all natural dialogues. I am so familiar with this discussion ... enjoyed it ..