Ambition is ExtraOrdinary When Followed by Action and Accomplishment 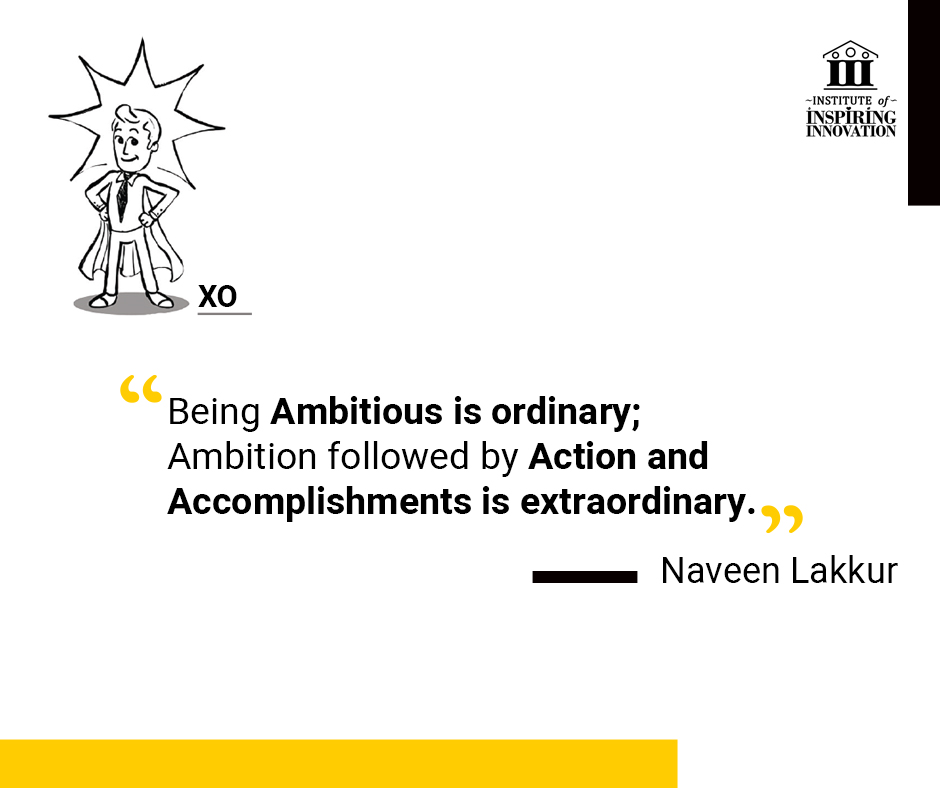 “Being Ambitious is ordinary; Ambition followed by Action and Accomplishments is extraordinary.” – Naveen Lakkur

People start college or start at an organization with ambition. However, those who follow-up their ambition with action and accomplishments get remembered.

American singer and songwriter John Legend’s journey towards becoming the first African American person to make it to the list of Emmy, Grammy, Oscar, and Tony Awards (EGOT) winners is legendary. Born as John Stevens, his family of faith played music at church.

Very early on, he took piano lessons with a dream to make music. His parents encouraged his passion for music and he and his 3 siblings were required to focus on education as well. He also had an interest in the struggles of the African American community in the USA.

He was offered scholarships to top universities. He majored in English with a concentration in African American literature and culture. While at college, he worked and sang at groups and at a church choir. He was sleep-deprived, but his efforts paid off. He was invited to work with Lauryn Hill, another songwriter. After college, he took up a job as a management consultant with Boston Consulting Group, NY.

A chance meeting with his friend’s cousin put him in the music industry. The cousin was Kanye West. He won fans and awards with his angelic voice. For John Legend, his vocal talent and his songwriting talents were not enough. He had to put his ambition to work, got turned down to reach legendary status.

Who has not dreamt of controlling others’ actions? Literally? The ability to control other people with the power of your mind has been mulled by the Science fraternity and has been mentioned in science fiction. Greg Gage is a neuroscientist and the founder of Backyard Brains, a place where open-source tools are developed to allow amateurs to participate in neural discovery. He is also an electrical engineer who used his ambition and followed it with action, on someone else and then accomplishments. He accomplished the task of controlling someone else’s action with someone else’s brain signals. Watch this TED Talk demonstration.

Charles Eugster was a British-Swiss dentist, a track & field, sprint athlete and a bodybuilder. He decided to be fit at 97. According to him, keep oneself fit should not be something only young people must do, and doing nothing is a curse. His body started to deteriorate and he took up bodybuilding to change that. With an ambition to grow muscles, he followed it up with action by lifting weights and sprinting long distances in the woods, which was eXtraOrdinary. The fact that he won many awards at that age is a testimony to his accomplishments. Watch this short video about him.