Adding life to days is eXtraOrdinary 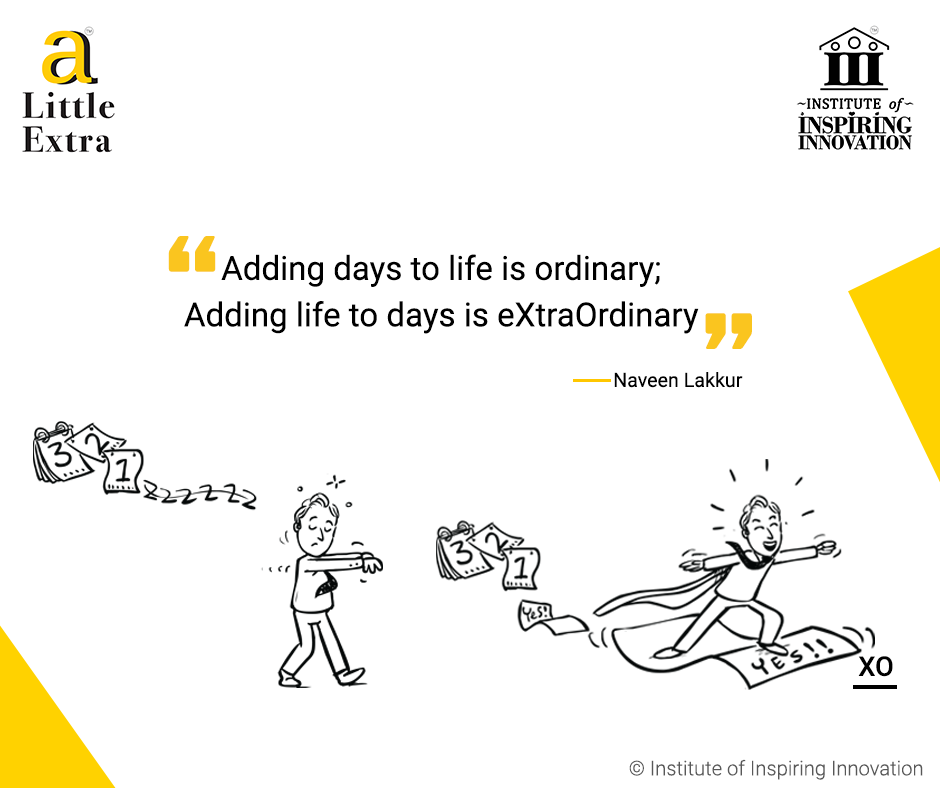 Medical science has improved so much that it has added days to people’s life. Though immortal life is still fiction, a cryonics company has stored its clients’ lifeless bodies with a promise to revive them in the future when they can. If this is achieved, which is…still a theory, people can win over nature.

However, we must not get our hopes up with pseudoscientific theories. Rock and roll legend Kurt Kobain once said, “It’s better to burn out than to fade away.” We must use the time, the days we have on this planet to add life to it, and add life to other people’s days. Let us look at some examples who have managed to add life to days.

Former US Air Force member Frank Shankwitz was involved in a high-speed chase on his patrol motorbike while working with the Arizona Highway Patrol. The drunk driver ran him off the road, and Frank crashed at 80 miles per hour. Though he was pronounced dead, an emergency room nurse made a last-ditch effort, performed CPR on him, and brought him back to life. In his own words, he saw the light at the end of the tunnel.

After this, he realized that God put him back for a purpose but did not yet know what. In 1980, when he was working for Arizona’s Department of Public Safety (DPS), he and his colleagues made a leukemia patient’s wish to be a police officer to come true. Chris Greicius wore a uniform and went on a patrol for a day. The 7-year-old was buried in the same uniform.

After this, Frank and his colleagues started the Make-a-Wish Foundation to help others and have stopped short of fulfilling illegal wishes. Interestingly, half of all their wishes granted involve Disney’s theme parks. It has collaborated with the National Football League (NFL) to give VIP access to kids who wish to attend their favorite football stars.

They have also worked with celebrities to grant wishes. Surprisingly, professional wrestler John Cena has granted the most wishes with 500 appearances. Singer Justin Bieber comes second at half the number of Mr. Cena. Anyone can fund the foundation, and the funders cannot be sure which of the wishes the money will be used for. In 2016, they went a Little Extra, created Wishmaker, an online fundraising portal, to allow donors to read personal stories about wishmakers and make donations.

What started small became a global movement, and there are many similar wish-granting organizations. The foundation has granted thousands of life-changing wishes to children suffering from a terminal illness and life-threatening diseases. It has volunteers worldwide who have made it the largest wish-granting organization, helping the foundation to add life to the days sick children have.

Fun fact: The foundation has drawn the line, and it specifically mentions that no wisher can make a wish for unlimited wishes.

India has produced many star cricketers; some of them are brand names and worshipped by millions. Jumbo, as teammates love to call him, The legendary Padma Shri Anil Kumble has won many hearts with his calm attitude on-field and inspiring attitude off the field.

An ICC Hall of Famer, he is the highest wicket-taker for India in a career spanning 18 years and is responsible for many victories, also as a captain. On February 7, 1999, he became the second bowler in the history of Test cricket to capture all ten wickets in an innings. He put his fighting spirit and commitment in full display when he bowled against his opposition despite a broken jaw after getting hit on his jaw with a vicious bouncer.

Though his strength did not lie in his batting, he made a conscious effort to improve his batting too. A century that he scored in the 2007 series helping India win a series away is a testimony to his fighting spirit. After he retired from international cricket, he served on the board of many cricketing associations, including the ICC.

He also served as a coach for a brief period. A sports motivational speaker, he tailors his talks to combine his understanding of leadership, motivation, and the importance of teamwork from the experience that he gained while captaining the Indian cricket team.

In 2005, Anil turned entrepreneur by co-founding Tenvic along with table tennis legend Vasanth Bharadwaj. Tenvic is a sports startup that provides sports education and training to young students in schools. Grassroots Sports is one of the company’s innovative services to provide a framework for budding talent to become proficient in science and arts of sports. They also offer to coach in cricket, badminton, table tennis, chess, among others.

The innovative sports firm adds life to young athletes’ lives through their inspirational programs to excel in sports and academics. Let’s hope with his little extra effort to add life into the sports aspirants he can produce many inspiring sportspeople like him.

Maria Montessori was born in Italy to a financial manager father and a well-schooled mother, unusual for women at that time. Her mother’s love for knowledge and books took root in her. A sterling student, she entered an all-boys technical institute to prepare for engineering. But she had a change of heart and opted for medicine, graduating from a medical school and becoming Italy’s first female physician.

She defied norms and worked in a male-dominated field with strength, dedication, and perseverance. Later, she focused her practice on psychiatry. Then, she began to observe and question the methods of teaching children with intellectual and developmental disabilities. She attended pedagogy classes and developed an interest in education.

In 1900, she was appointed the co-director of a training institute for special education teachers. Her scientific approach and experimentation with teaching methods made children have unexpected gains. She opened a childcare center near the district of Rome. The first-of-its-kind center in the nation had 3 to 7-year-olds who were unruly at first but later showed interest in puzzles, learned to prepare meals, and manipulated learning materials. The children essentially learned to teach themselves through observation.

Using these facts, Maria designed learning materials fostering children’s natural desire to learn, an innovation to teaching method at that time. Learning is a burden for many children. Whereas the Montessori method adds life by making learning fun. It creates a great learning experience and the progress can be seen visually by teachers and parents. The “Montessori Method” attracted the attention of educators, journalists, and other important people. By 1910, Europe was dotted with Montessori schools.

We must observe that online learning platforms like Byjus are using visual aids to help children learn and enjoy. In her final years, Maria dedicated her time to advocating a child-centered approach to education. She traveled, lectured, wrote books, and developed the Montessori education program that the world adopted. She also spoke for women’s rights and campaigned for greater opportunities for women. Her method added life to educators and children alike who learned through visual aids.

Did you know? Maria developed much of the Montessori teachers’ training material during her exile in India. She worked on many of her teaching ideas, including her work, ‘Education for Peace,’ a peace education to the Montessori curriculum while she worked and lived here. She was nominated for the Nobel Peace Prize twice. Her models and methodologies in educating children have been time tested and continue to add life to millions of children during their learning days.