An ability to extinguish others’ anger is eXtraOrdinary

Home Articles a Little Extra An ability to extinguish others’ anger is eXtraOrdinary
Naveen Lakkur / a Little Extra, Quotes / 0 Comments 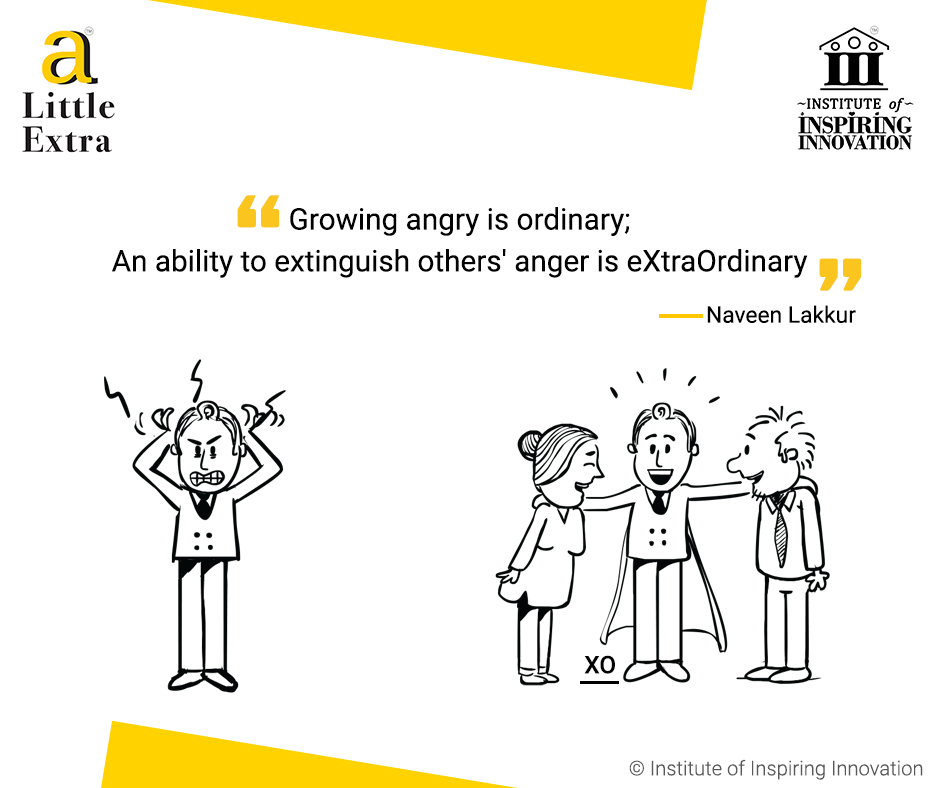 “Growing angry is ordinary; An ability to extinguish others’ anger is eXtraOrdinary.” – Naveen Lakkur

Anger is one of the most common emotions. It’s not unusual to show anger in times of crisis or any unfortunate situation. However, anger must not consume you. They say it is just short to ‘DANGER’. However, it’s hard to control this emotion but you can channel anger in such a way that something good could come off it. Some people go a Little Extra to quell the anger in others with innovative solutions. Entrepreneurs, intrapreneurs, and innovators use their anger to create useful things. Let us look at a few inspiring examples.

Big cities usually attract talent from small towns and villages to work in their factories and companies. One such young talent arrived in Bangalore as a software developer in the early 2000s. In 2005, when he wanted to return to his home in Andhra Pradesh by an overnight bus to celebrate Diwali with his family, he could not find a ticket.

Despite visiting many travel agencies, Phanindra Sama could not find a bus to travel back home. Disappointed that he missed Diwali with his family, and angered that there were online ticketing platforms for air tickets but not bus tickets, he wanted to change that. He created a team consisting of former classmates and colleagues who were new to Bangalore.

Along with two other key people, Charan Padmaraju and Sudhakar Pasupunuri, the team went to bus operators to find their pain points. They built three products, BOSS for bus operators to list available seats, Seat Seller for travel agents, and RedBus, a platform where travelers could book bus tickets easily.

Today, RedBus has more than 2,000 bus operators using its application who have listed more than 100,000 routes across India. It has served more than 18 million customers. The RedBus app has more than 7.5 million downloads. People can also approach more than 75,000 partner outlets to book a ticket. These numbers were possible with help from more than 250 people working across ten offices countrywide.

It gave rise to an entirely new industry that is app-based and web-based bus booking. An interesting fact is that the idea that’s worth more than $110 million was not ‘inspired by Silicon Valley.’ The founders turned disappointment and anger into an opportunity. They solved a problem, built something useful to serve travelers and those in the bus operating business. With their little extra efforts, they extinguished others’ anger too.

In the Northern Italian province of Emilia-Romagna, in a quiet town of Renazzo, Ferruccio Lamborghini grew up in his parent’s vineyard. He grew up through two world wars. Despite the gloom of the war and the post-war economic decline, he grew up and stayed ambitious. While most Italians at times chose farming, he studied mechanics at university and started a workshop.

When Italy needed to increase agricultural production after the second world war, his experience with vehicles came in handy. He started a company and made tractors on a large-scale using left-over military equipment built during Mussolini’s time. He made affordable diesel tractors with British Morris engines, which became coveted for Italian farmers.

He started a second company called Lamborghini Trattori. With time, his business made him wealthy enough to buy expensive sports cars at that time. Being a mechanic himself, he was also a critic of his cars. He thought that the Ferraris he owned were too noisy and had a barebones interior. The clutch always burnt up all the time, needing repairs.

He learned that the clutch fitted on the Ferrari was identical to the clutch installed onto one of Lamborghini’s tractors. Infuriated by this and the growing repair bills brought him straight to Enzo Ferrari. Enzo rebuffed him, saying he should not drive a sports car because he was a tractor manufacturer. Humiliated, he vowed to build sports cars by setting up Automobili Lamborghini.

His cars used innovative designs, and when the first car GT350 rolled out of the factory, a healthy rivalry with Ferrari was born that continues to this day. The 70s were troublesome, with oil prices rising and stock markets crashing. He first sold Lamborghini shares, then his tractor business, and the rest of the company to investors who wanted to prop up the brand.

The company kept changing hands until it turned a profit with a streamlined business under Volkswagen’s ownership, allowing the company to start taking its place back in the supercar market. Today, it is investing in material research and development and marketing aggressively. The automobile giant is now worth $11 billion, putting it in a prime position for its parent Volkswagen to register for an initial public offering.

Lamborghini channeled his anger into creating a brand beloved by fans worldwide and has been attracting the attention of car lovers angry about the design flaws of other manufacturers.

Did you know, the Veneno Roadster is the most expensive Lamborghini, priced at €3.3 million. Released in 2014, he was equipped with a 6.5-liter engine with 750HP and reached a top speed of 355kph. The makers improved its aerodynamics and used carbon fiber to reduce its weight instead of increasing engine power. What an innovation.

Nondumiso Zendile was born to a family of entrepreneurs in South Africa, because of which she grew up with love for business and creating new things. However, her ambition took a hit when rival businesspeople murdered her father. For a few years, she worked in an office. However, her bosses were unresponsive to her ideas and looked down upon her.

She quit in rage and worked in the beauty business for a few years. She, along with her husband, started Kingsworth Civils and Construction Pty Ltd, a company that builds well-constructed affordable housing, commercial and industrial buildings, and urbanizing previously disadvantaged areas.

While her husband takes care of logistics and operations on the sites, Nondumiso, the company’s CEO, operates from her office and markets her company’s capabilities. The company’s affordable housing solution was a hit among its clients. She felt ‘at home’ suggesting innovative ideas to her clients, working out their budget, pouring the foundations to lay the bricks, execute projects, and provide clients with tangible outcomes.

She likes the priceless moments when her clients take the keys to their house and see how beautiful it has become. Besides this, she is proud that her work is contributing to the South African economy and society. She is also planning to go a Little Extra and get into the property development space, build contemporary homes, and cater to medium-income earners so that government-provided homes can go to people who need it.

Affordable homes and commercial buildings of good quality are a key priority for South Africa’s socio-economic development aspirations. Nondumiso is now a part of a new wave of women entrepreneurs entering the South African construction industry with building affordable housing solutions, creating jobs in the process.

Her father’s murder did little to quell her entrepreneurial steak. She used the anger of being snubbed by her bosses as a result of being a woman of creativity and innovative ideas, to channel it towards quelling homeowners’ worry of owning an affordable home that looked beautiful and spacious. Her little extra efforts are not just to extinguish others anger now, her effort is to make them smile.